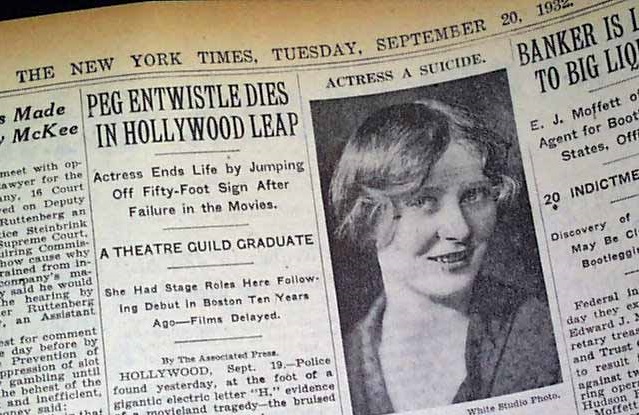 Hollywood is tough town and tough business. Many young hopefuls flock to Los Angeles to be “discovered” and to become a famous and rich A Lister. Of the thousands that set their sights on one day winning that Oscar or just working regular as an actress doing the craft they love; a miniscule percentage make it. The odds are slim and timing must be just right. Being at the right place and at the right time. If you want to call luck or your written journey but the percentage that are successful at their craft are few.

If you take your craft so seriously that your whole identity is attached to whether you make it or not in Hollywood, and then if you fail, it can have disastrous results on your psyche. One of these young actresses who did not make it in the 1930’s Golden Age of Hollywood was Millicent Lilian Entwistle.

Known as Peg, she was born in Glamorgan, Wales. Entwistle traveled with her family to the United States in search of a new life. Tragically, both her father and stepmother soon passed away. As a result, she went to live with an uncle in New York City. Her uncle was responsible for managing a Broadway star, and she soon caught the showbiz bug.

She clearly took to it well, and by 1925 she was performing on Broadway, where she would appear in a total of ten plays. Most famously, she starred alongside Sidney Toler in the hit show Tommy – a role that she would take on some 232 times.

But still she wanted to be more, she wanted to be a BIG star! She even supposedly dated Humphrey Bogart for a time. When she was finally cast in a small part in a movie, the director cut her part drastically and she then found out her contract with RKO was not going to be renewed.

According to her uncle, Entwistle became depressed and on the evening of September 16, 1932, she wandered out into the California night. Two days later, a woman walking near the famous Hollywood sign – which read “Hollywoodland” at the time – stumbled upon the gruesome discovery.

At the age of just 23, Entwistle committed suicide. According to police, she had found an abandoned ladder at the back of the letter H and climbed some 50 feet to the top. Once there, she leaped to her death. Reports stated that the note that she left behind was full of despair.

“I am afraid I’m a coward,” it read. “I am sorry for everything. If I had done this a long time ago it would have saved a lot of pain.”

Since then in true Hollywood style, her ghost continues to haunt the place where she met her tragic end. In the 1940s the letter H from the sign was destroyed in an accident.

Then, in the 1990s a couple hiking the trails were startled by a disorientated blonde woman in period dress. Apparently, she terrified the hikers before promptly disappearing into thin air.

A jogger recently claimed to have been frightened by an apparition accompanied by a smell of gardenias – apparently the odor of Entwistle’s favorite perfume. Even though now dead, she is still hoping that Hollywood will take notice of her and make her a star.

It is a known fact that ghosts stay in the location of where there they met their tragic end. Since Entwistle was so obsessed with becoming a Hollywood star, it would not be improbable that even after death, she would remain in the that space where all her hopes and dreams were targeted.