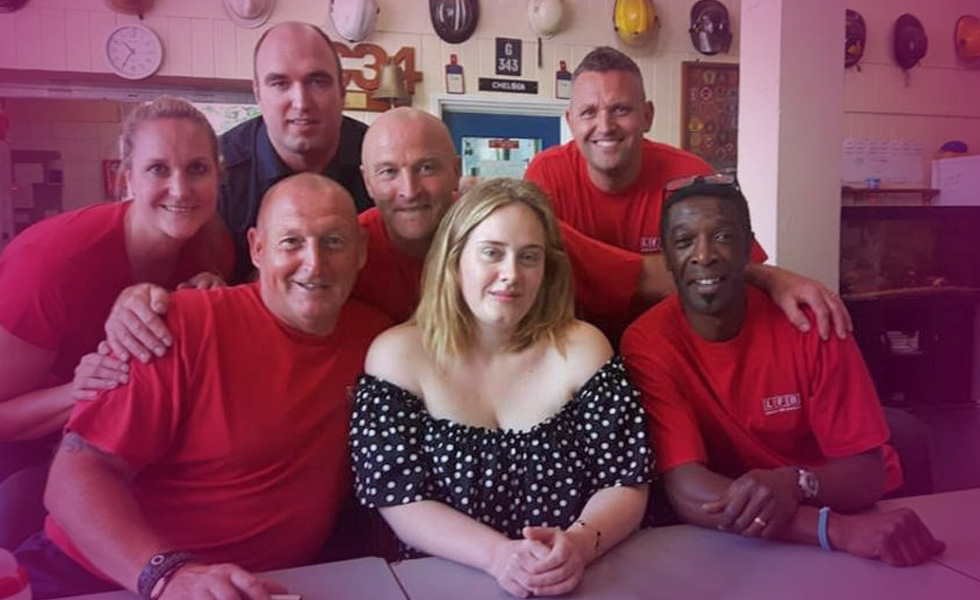 The singer came by to thank them for their efforts during last week’s horrific apartment fire in London. The firefighters at the Chelsea Fire Station in London were met with a great surprise when Adele stopped by to hang out. And she brought cake! The 29-year-old stopped by Monday to thank the firefighters for their courageous efforts following the horrific fire in Grenfell Tower last week that left at least 17 people dead, 74 injured, dozens more in critical condition and at least 50 people missing. Photos of Adele’s visit were posted by the London Fire Brigade’s Twitter on Tuesday. They said they were “humbled” by everyone’s support and they shared a cup of tea with the singer. Firefighter Rob Petty also shared the images of the visit on his Facebook page, noting they had tea and “a cuddle” with Adele.

#Not every day the wonderfully grounded and caring Adele pops into Chelsea Fire station for a cup of tea and a cuddle. X

Fire station manager Ben King told The Independent that “she just turned up at the station and knocked on the window and said she has some cakes for us.” “So, we opened the door to her and then she took her sunglasses off and said: ‘Hi, I’m Adele.’” King also said the department has had “so much support from the local community and we cannot thank everyone enough.”

Adele’s impromptu visit to the station comes after she and her husband Simon Konecki showed up to the horrifying Grenfell Tower fire on Wednesday (June 14) to offer assistance and support to the victims.
According to eyewitness accounts, the singer “made a low-key appearance at a Wednesday night vigil for victims and survivors, where she hugged and comforted some of those affected.” During that visit, the singer was asking if anyone needed help and went “around and hugging everyone she could to comfort them.” A number of users posted a series of pictures of a distraught-looking Adele reportedly on the scene. The inferno completely engulfed the 24-story structure. The fire started just after 1 a.m. local time and burned for more than 10 hours in the Notting Hill district. Prime Minister Theresa May visited the scene of the tragedy to speak with emergency services and ensure that they have the resources they need to deal with the situation. “Sadly, we do anticipate the death toll will rise as we haven’t done our searches of the top floors yet,” she told reporters at the scene.

Basically, This Kind Act Of Adele Proves The Rumors True That She Is “Real” Regardless Of Her Fame

Adele’s personality has often been pointed out as her being potty mouthed, caring, down to earth (she makes her own dresses for God’s sake!) and just not all that impressed with the star power stuff. Just this one act proves how much she cares about people in general. What a gem!

Four of Wands:
This card is change of residence and optimism for the future. While no one wants to lose their home in this horrible way, they have raised over £1million to help the survivors.

Ace of Swords:
This is a sword of justice that cuts away the crap. This card may represent as investigation of the fire begins, the building might have not come under safety fire codes and why it was engulfed so quickly.

Princess of Wands:
This is a young energetic and uplifting person with many new creative projects. This card obviously represents Adele’s energy with this situation. I feel she will continue to give her support, quite possibly a fund-raising concert or lending her notoriety to help raise funds.