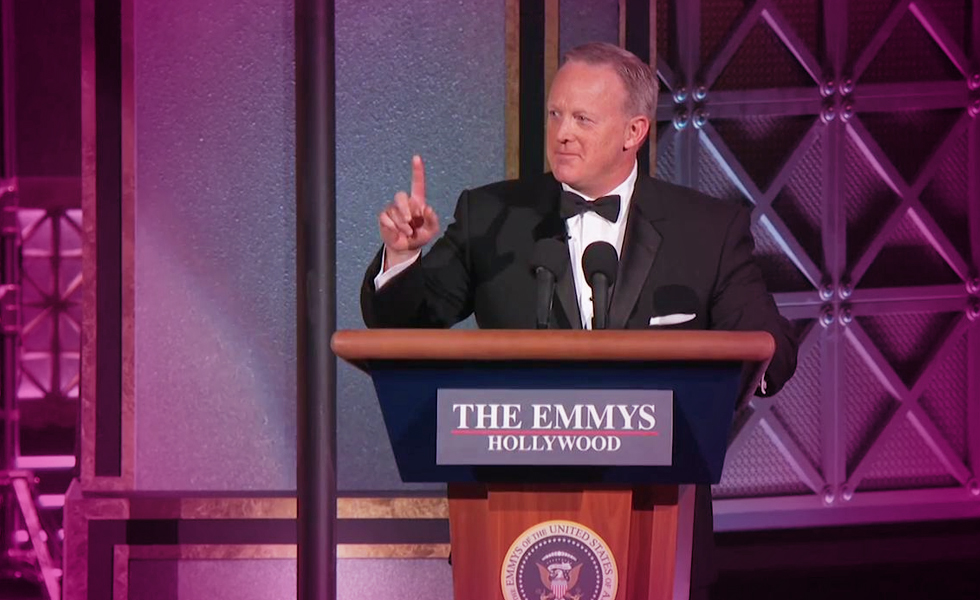 Angry Viewers Were Not Amused By Sean Spicer Emmy Appearance

What was Colbert and the Emmy producers thinking?! One thing you have to say for the man who repeatedly lied to the American people on several issues when he was Trump’s mouthpiece, he knows how milk the spotlight and the buck for all it’s worth. Sean Spicer, former political aide who served as White House Press Secretary and then as acting Communications Director for Donald Trump until last month, somehow thought all would be forgiven to a Hollywood crowd who is mostly liberal Democrats and HATE!!!! Trump with a passion! He made his controversial appearance by rolling out on the Emmy stage with his own podium and basically making jokes about lying to the American people

Unsurprisingly, viewers were not enthusiastic and not finding the bit funny. Some people online called out Colbert and the award show for trying to normalize Spicer, who repeatedly lied to the public on behalf of President Donald Trump during his time as press secretary. For a fleeting moment, those in the Los Angeles’ Microsoft Theater seemed to forget who exactly it was they were applauding. The shocked looks on the faces of the audience was definitely a WTF moment! Spicer’s tenure serving in the Trump administration was marked by frequent controversies, starting from his first day on the job. Following Trump’s inauguration, the press secretary told reporters that the president’s inauguration featured the largest crowd in presidential inauguration history, a claim quickly proved false by photographs.

As the former White House press secretary made his way onto the Emmy Awards stage rolling a podium that looked similar to the one “Saturday Night Live” used to mock him, tweets poured in from viewers. It was this same controversy Spicer made light of with a joke during his surprise Emmy appearance. He declared, “This will be the largest audience to witness an Emmys, period.” Some of the reactions from stars and voters went something like this:

#Harvard fellowships, Emmy appearances, huge speaking fees: there’s just gonna be no penalty for working in Trump’s White House, huh?
#What fun to watch @seanspicer having a sense of humor about all the times he lied to the American public! GOOD SPORT! #emmys
#Isn’t it funny! Sean Spicer comes out @ #Emmys to lampoon moment he tried intimidating White House press corps over inauguration crowd. Sigh
#Steve Bannon got a 60 Minutes feature & Sean Spicer got an#Emmys cameo, but Hillary Clinton needs to “shut up & go away”? Mmkay.
#Interesting choice by Emmys to let someone joke about demonstrably lying to the American people on behalf of the most powerful person in US.

This is what I would say is a BAD joke done in BAD taste and backfired on Colbert and the Emmys. The only reason Spicer is now anti-Trump would be he got his ass kicked out. I believe he would still be standing behind his White House podium telling even bigger lies if all was status quo. It is the dishonesty of what he stands for that outraged people, assuming all would be forgiven and find Spicer humorous taking jabs at his old job.

Princess of Wands:
Youthful energy wanting to create new projects. I would say this card represents the childish naiveite of Spicer, Colbert and the Emmys at this stunt.

The Star: Inverted (Upside Down)
Everything will turn out ok and have a good ending. Pulled inverted, I believe the repercussions of this appearance might be have a long reaching arm for everyone involved.

The High Priestess: Inverted
Self-sufficient energy and the sense of feeling isolated and alone if not in a good place. I feel this is the energy of Spicer right now. Wanting to distance himself from his Trump tenure and start over, believing he is not a bad guy and was just doing what he was told to do to keep the job.