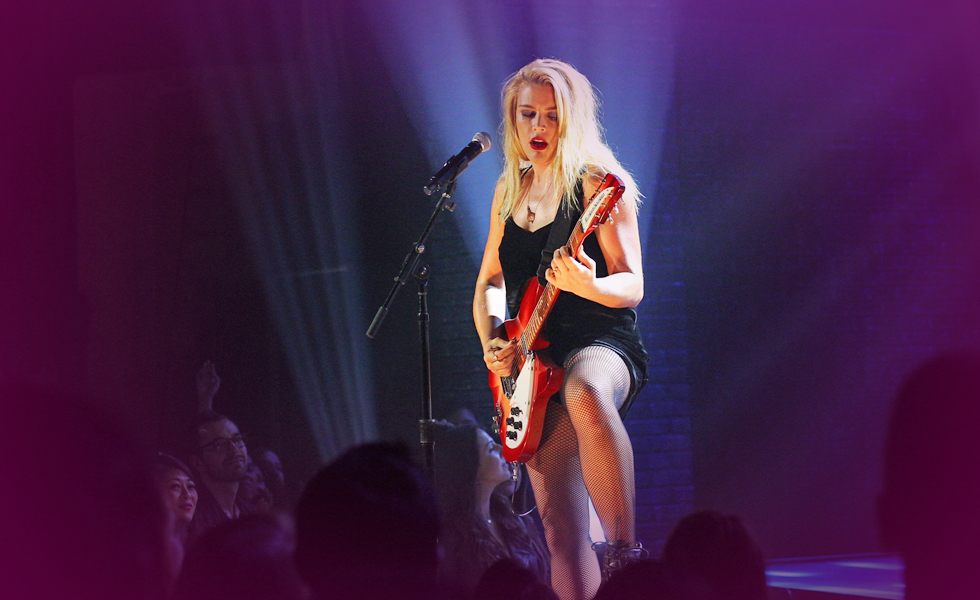 They say you should never meet your heroes. It’s advice Busy Philipps should have taken before meeting Courtney Love in 1999. On Comedy Central’s “Comedy Jam”, Philipps said that she used to idolize the ‘Hole’ frontwoman while growing up. “I can’t pinpoint the exact moment, the onset of my obsession with Courtney Love, but I do remember hearing her voice and being like, ‘Who the hell is this badass woman?’ That she just didn’t give a f**k about what anyone thought about her or said about her,” Philipps told a large crowd as a lead-in to her spot-on cover of Hole’s “Violet.” She continued, “I cut my hair into bangs and started wearing red lipstick and painting my nails black and fishnet stockings and Doc Martens. I got this vintage leopard coat that was my prized possession I wore year-round, even though, guys, I grew up in Arizona. It’s like, 120 degrees.”

The 37-year-old former “Dawson’s Creek” star continued to wax nostalgic about Love’s badassery, telling the audience of how she cried when she attended her first Hole’s, Live Through This tour.

The actress then recalled how, shortly after she had got her first big break in Hollywood, being cast on “Freaks and Geeks”, the show’s producer, Judd Apatow, surprised the cast by bringing them to premiere of the movie “Man on the Moon” which co-starred none other than “Courtney Love.” At the film’s after-party, Philipps said she threw back a couple of vodka cranberries before mustering the courage to go over to Love’s table. There, she said she started babbling about how great Love was in the film before the singer silenced her with an icy stare. “Her look literally stops me talking because she’s glaring at me as if she wants to set me on f**ing fire,” Philipps said. “And she sort of narrows her eyes at me and she looks up and is like, ‘This is my friend Paul. Do you want to f**k him?’” Philipps, who was “mortified,” declined the offer. “I slunk back to the table with the other ‘Freaks and Geeks.’ Paul, by the way, turned out to be Paul Rudd. Obviously. It was one of the most humiliating moments of my life. Not to mention, you guys, I missed my chance with Paul Rudd.”

Before launching into “Violet,” Philipps told the audience, “But in retrospect, we could have never been best friends because she’s just way too cool for me.” Who needs to be friends when Philipps could just play Love in a biopic instead?

This Is A Perfect Example of Cult Idol Worship Gone Amuck? Lol!

Philipps’ story I bet is no different than hundreds of up and coming stars who meet their idol (albeit a drugged out one) and being treated like the peon they are perceived to be. Many big stars have similar stories climbing up the ladder of fame in Hollywood.

Four Swords: Inverted (Upside Down) This card is wanting to retreat from life and emotionally exhausted. I believe that fairly sums up the place where Courtney Love has spent most of her rocker life and the time Philipps met her.

Knight of Wands: This card is freedom to do what you want and impatience. Need I say more of the introduction Phillips had with Love. Age has not mellowed Love out much either.

Six of Swords: Inverted
This card is spiritual awakening and enlightenment. The card being inverted, I believe this perfectly sums up Philipps big dose of reality when meeting her idol and as she got older realized it was not that Love was to cool to acknowledge her but just downright rude and obnoxious. Rumor has it, she still is. Lol!