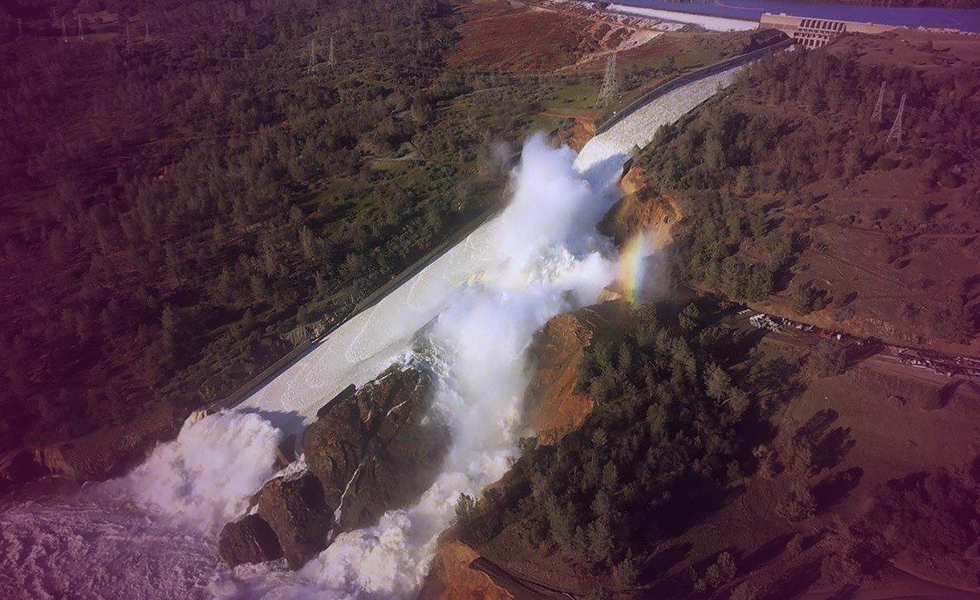 Thousands of angry residents in northern California have fled their homes this week following an evacuation order from the authorities. The order was made due to erosion on the dam’s spillway causing concern that an out of control flood would devastate the towns below. Since the authorities didn’t know which way it would go, they planned for the worst-case scenario.

Oroville Dam is the country’s tallest, there hasn’t been a need to use the emergency spillway for the last fifty years but after the region’s heaviest rainfall last weekend, together with the erosion issues, the main one having a huge hole the size of a football field, it was deemed not fit for purpose when the lake topped to its capacity.

Authorities insist that the structural integrity of the dam itself remains sound, but a broken spillway has the potential to release water three stories tall into the river valley downstream. For now, a controlled release of water has been executed from the main concrete spillway, channelling the water away from populated areas.

Friends of the River, policy director, Ron Stork said that without a proper spillway, the hillside would wash away and cause catastrophic flooding. He revealed that officials were asked to put concrete on the spillway some ten years ago but nothing was done. Indeed, Mr Stork!

The cards drawn today are the King of Pentacles, the Six of Hearts and the King of Swords.

The King of Pentacles represents the authorities and their money. This card says that preventative action will be taken by the authorities who will dig deep and spend the much needed money on the dam.

The Six of Hearts represents the past. Ron Stork said that the issue should have been addressed ten years ago, hindsight is a wonderful science but we can’t go back, we can only go forward with lessons learned.

The King of Swords represents the engineers who will do their utmost to prevent this issue from recurring.

The authorities say that the dam is structurally sound, but had the maintenance of the dam taken place ten years ago then thousands would not have been impacted by the threat of the worst case scenario. Yes, hindsight is a wonderful thing but lessons have been learned. Our thoughts are with the families affected.