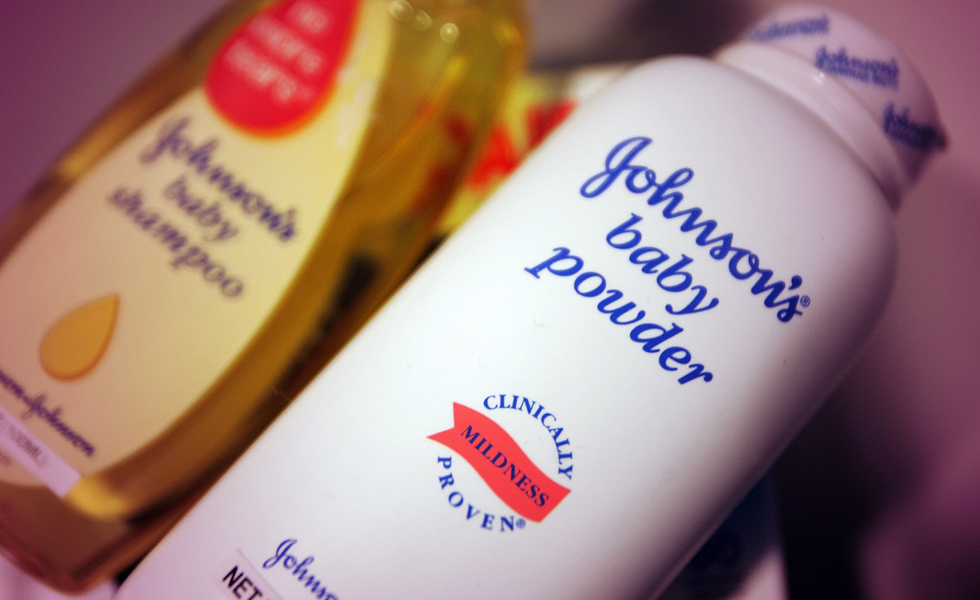 Once again Johnson and Johnson is involved in a cancer causing lawsuit payout. This one makes it even more scary because we are talking about baby powder. Plaintiff Eva Echeverria, 63, told a Los Angeles court she developed incurable ovarian cancer after decades of Johnson’s Baby Powder use. She used it as a feminine odor protection and the constant use of the powder containing talc was instrumental in her and other lawsuit victims contracting ovarian cancer. As Johnson and Johnson faces thousands of U.S. lawsuits over potential cancer risks of its talc-based products, a California jury ordered the company Monday to pay $417 million in damages to the terminally ill woman. This is what is known in the pharmaceutical industry as “collateral damage.” Putting a product out, knowing there might be a potential hazard to health but are willing to take the “hit” with lawsuits because of the enormous profits to be lost if they pull it off the market or make a change.

Eva Echeverria, 63, who is undergoing treatment in the hospital for ovarian cancer, testified through a video deposition that she’d used Johnson’s Baby Powder for feminine hygiene for more than 50 years before halting the practice in 2016, the Los Angeles Times reported. She only stopped after watching a news story about a woman with ovarian cancer who had also used the talc for a similar purpose, she said. She was still using the talc product as she was being treated for ovarian cancer for almost a decade. Agreeing with the plaintiff that there was a connection between her cancer and her use of Johnson & Johnson products containing talc, a Los Angeles Superior Court jury awarded Echeverria $70 million in compensatory damages and $347 million, a record total in punitive damages on Monday. The verdict was the largest sum that’s been awarded in a series of talcum powder lawsuits against Johnson & Johnson. In May, a jury in St. Louis, Missouri, ordered the company to pay $110.5 million to a 62-year-old Virginian, who was diagnosed with ovarian cancer after using Johnson & Johnson’s talc-based products for many decades. The company has also lost three other similar trials in Missouri last year, which it paid out a total of more than $300 million in damages for.

Speaking after the verdict, Echeverria’s lawyer said his client hoped her court win would compel Johnson & Johnson to clearly label their talc products with health warnings. Echeverria is dying from this ovarian cancer and she stated, “all she wanted to do was to help the other women throughout the whole country who have ovarian cancer for using Johnson & Johnson for 20 and 30 years,” Mark Robinson told The Associated Press. “She really didn’t want sympathy. She just wanted to get a message out to help these other women.”
In a statement, Johnson & Johnson said it would appeal Monday’s verdict “because we are guided by the science, which supports the safety of Johnson’s Baby Powder.” The company is currently facing almost 5,000 similar claims across the United States, according to Reuters. Their appeal is based on the fact that scientific evidence linking talcum powder use to cancer is lacking but the American Cancer Society has confirmed there is “a very slight increase in risk of ovarian cancer in women who used talc on the genital area.”
The organization added that cornstarch powders, which can be used as an alternative to talc-based ones, have not been linked to any female cancers.

Wow! This is also what we use in baby’s diapers! Regardless of what Johnson & Johnson states as no scientific proof that talc causes ovarian cancer when used in the genital area, the fact they are losing the cases one by one, says something different. So much for collateral damage and how many years back do you have to go to know if it has affected you? Girlfriends and mothers, NATURAL ORANGIC POWDERS!!!!!!

Two of Swords:Stalemate and not being able to come to a decision. As in all cases like this, there is never absolute proof but statistics to make a case. Johnson & Johnson will stand by its product and continue to pay out the “shut up” money for it admits knowingly putting a product out there that is a danger for women, the payouts will be much higher.

The Empress:
Loving, giving and caring of nature and wants the best for everyone. This card I feel represents Echeveria in her fight to bring to light the cancer-causing talc situation. It is too late for her but as she states, she wants to help others in her situation and for others to never use it.

Queen of Wands: Inverted (Upside Down)
A loving and generous of nature female. Since this is inverted, it shows the cold disregard for women’s health that Johnson & Johnson has taken in these cases.