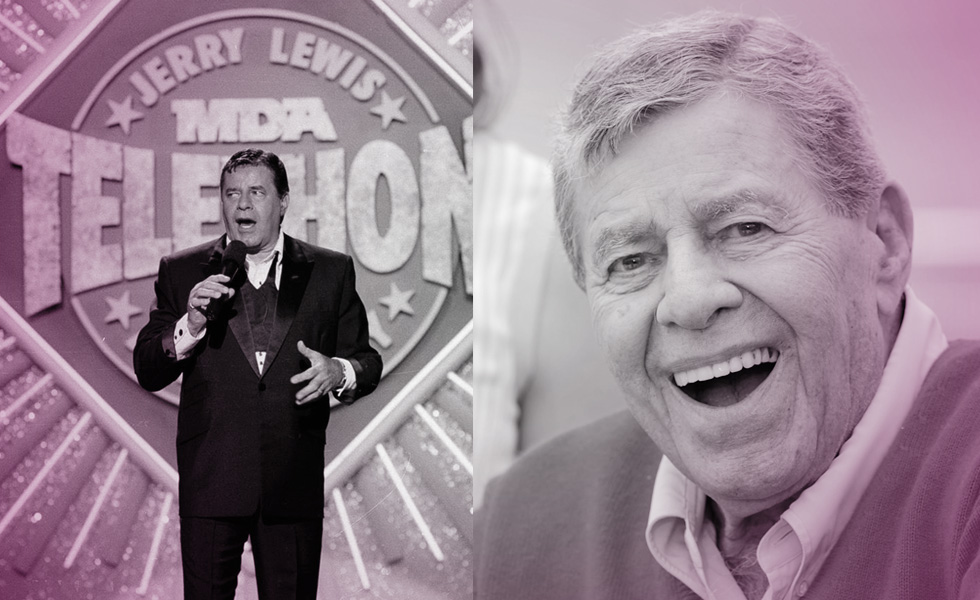 Jerry Lewis was a comedian from a time when slapstick humor was at its peak in TV and movies. Think Gene Wilder, Red Skelton, Lucy…the list is long. His outrageous horse laugh and the ability to fall over his own feet kept several generations laughing till they cried. He got too old to be falling over chairs and slapstick humor no longer got laughs but he left a legacy of outrageous comedy that will never be forgotten. Jerry Lewis, 91, died peacefully from natural causes at his home in Vegas according to a statement from his family. Lewis’s comedic legacy can definitely be considered as one of the greatest comedians in the history of comedy.

He was known for his slapstick routines and found big success when he teamed up with Dean Martin in 1946.
Jerry Lewis starred in more than 50 films, including classics like “My Friend Irma,” “The Nutty Professor,” “The King of Comedy,” “The Bellboy,” “The Ladies Man,” and “Cinderfella.” He also had plenty of TV shows under his belt, one of them with Martin being “The Colgate Comedy Hour.” Jerry has 2 stars on the Hollywood Walk of Fame … one for TV and another for film. But what millions remember him for in his later years was the emcee of the “Muscular Dystrophy Telethon” held every Labor Day weekend, where Lewis would raise money for 24 hours straight. It became known as “Jerry Lewis’s Telethon.” He raised nearly $2.5 billion by the late 2000s and was nominated for a Nobel Peace Prize in 1977 for his efforts in raising awareness and money for the disease. Lewis also got a lifetime achievement award in 2009 by the Academy of Motion Pictures Arts and Sciences.

Many did not like Lewis’s humor, dismissing it as sophomoric, even juvenile. Lewis’s answer to that was simple: “I’ve never been more than 9 years old,” he declared in a 1996 Washington Post interview. That same 9-year-old also directed a dozen films. The director Jean-Luc Godard once called Mr. Lewis “the only American director who has made progressive films,” adding that Mr. Lewis “was much better than Chaplin and Keaton.” In both art and life, Mr. Lewis strenuously combined the ebullient and the egregious. His overzealous humor did not come with a lick of shame. Also known as being hot tempered and difficult to work with at times due to his perfectionism and of course wanting to be taken seriously. Hosting his telethons, which began in 1966, showcased Mr. Lewis at his best and worst. No one ever questioned the sincerity and tirelessness of his efforts to raise money for “Jerry’s kids,” as Mr. Lewis called young victims of muscular dystrophy. But his ego and over the top lack of taste was often disparaged as a crass three ring circus ringmaster hawking for money. No shame there and he always made his money mark for the charity he loved the most. In 2011 the telethon abruptly dropped him as host, the reason was never made clear but it seems they also had enough of the circus.

Lewis’s had an unforgiving nature and a history of notorious spats as with Dean Martin that stayed in the public eye for many years. Martin finally appeared on one of Lewis’s telethons in 1976 after almost 20 years of Lewis’s refusal to speak to him. His abrupt departure from the telethon I believe shows that even though his heart was in the right place, his ego was a force to be reckoned with. Rest In Peace Jerry!

The High Priestess: Inverted (Upside Down)
The energy of being self-sufficient but also when pulled inverted can mean feeling isolated and alone. I feel this card shows the diva in Lewis and his belief that he could do it better than anyone else and did not need anyone else.

Queen of Pentacles: Inverted
Not real sure why all this feminine energy is being pulled for Lewis but this is a female that status is important and wants to be of service. Being inverted, it also shows how the ego can interfere when the heart is in the right place but you are still a pain in the ass about it.

Four of Pentacles: Inverted
Financial issues and obsession with materialism. Inverted, I feel this is why he was cut from the telethon after so many years. He became obsessed with the money mark and became extremely pushy and obnoxious going after it.