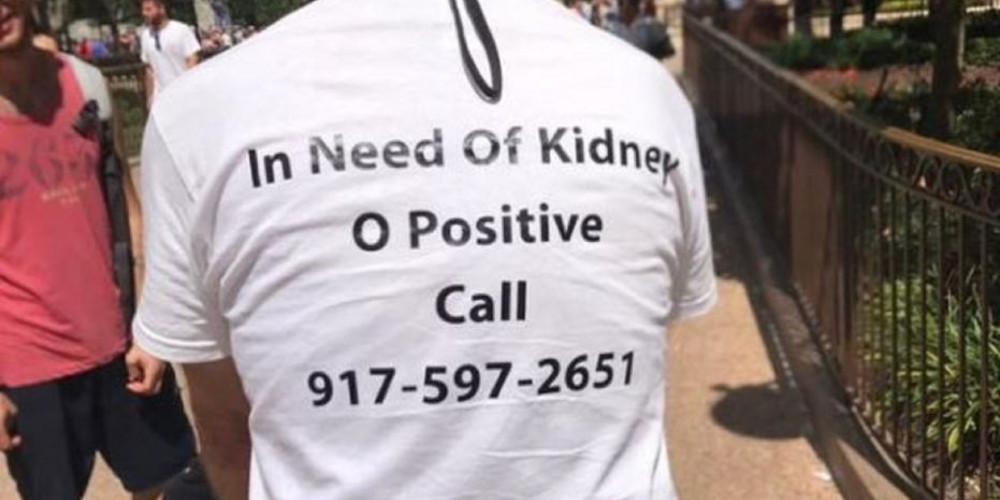 Having lived in Central Florida in the Disney area, I am very familiar with everything Disney. Regardless of age, there is truly a magical quality about being someplace where all your childhood fantasies walk around hugging you and experiencing rides that make you go “oooh and aaaah” and get you completely soaked as a side thrill.

One man’s love of the Disney Park found his miracle in the form of an idea of being a walking t-shirt advertisement in need of a kidney transplant. Now if that is not divinely inspired, what is? It’s common for families and large groups to make custom t-shirts when they visit Disney Parks, but one man’s homemade design led to a desperately needed kidney donor.

Rob Leibowitz is 60-years-old and had been undergoing kidney dialysis for years. He’s also a self-described Disney fanatic who takes his family to Walt Disney World every other year. When recent steps to find a kidney donor failed, the family called on the miracle brigade and advertised his need on a t-shirt while walking the theme park. And it worked!

Rob Leibowitz works for an advertising firm, so he knows a thing or two about how to work public relations and attract attention. He came up with the idea of using a t-shirt and then had his daughter design the shirt.

It was a simple white t-shirt with black writing that read “In Need Of Kidney O Positive Call” with his phone number. Leibowitz’s O positive blood was a major stumbling block in his finding a donor as it limited the pool of potential donors. His family was not able to donate either.

As you’d expect, people noticed the shirt as the family wandered Walt Disney World and many took pictures. While inside the Magic Kingdom, Rob Leibowitz met Rocio and Juan Sandoval who posted a picture of Leibowitz in the shirt to his Facebook. That’s when things exploded.

The photo was shared more than 90,000 times in a week and Rob’s phone began to ring. In all, Leibowitz spoke to around 100 people and found 50 who were committed to seeing if they were a transplant match.

Testing went so far as seeing three potential donors fly to New York for secondary tests and while none of them turned out to be a match, eventually Rob Leibowitz heard from Richie Sully, a single father from Indiana who did turn out to be a match.

If you’re looking for a miracle from a humanity standpoint, there are certainly worse places to look than Walt Disney World. The sheer mass of humanity that wanders the parks on a daily basis might be the most diverse cross-section of mankind on the entire planet. People from every country in the world visit Walt Disney World every day, never mind every state in the union.

It’s virtually a guarantee that the man in need of a kidney transplant was going to walk past somebody who could help him, the only real question was whether he’d find somebody who would help him. While the park itself did not give the donor match he needed, the power of social media amplified the message to a place where it could be heard and received. That is the power of loving humanity working as a whole. Congratulations Rob!

With so many stories everyday of tragedy, heartbreak and disappointment, to watch unfold an energetic intention of creating a miracle is a breath of fresh hope. There is an old spiritual saying that comes into play with everything that you are hoping to manifest. “God helps those who help themselves and then learn how to let go and let God.” It is between that fine line, walking the balance beam of faith and action that truly brings a miracle front and center. Disney and Rob Leibowitz just created another one.