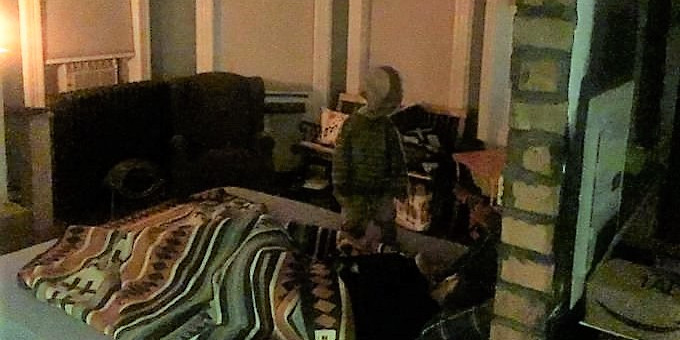 For the past several months, I have been fascinated with the Twitter postings of a New York City-based illustrator Adam Ellis documenting his personal experiences in his apartment with a little ghost boy named David. It reminded me of how easy it is to become fascinated with the paranormal and not give any credence of its capability of becoming dangerous, very dangerous.

After watching Ellis’s posts, I am beginning to believe he might have something more than a “little ghost boy apparition” going on. His recent new evidence and posting of a picture of “Dear David” has pretty much left Twitter speechless and of course, a few crying foul.

Ellis’s nightmare saga began on Twitter in August of this year when he began posting seemingly ghostly encounters with “Dear David”, a dead boy with a disfigured head that he alleges has been causing him all types of blood-curdling mayhem.

A few months later, Ellis posted the first photo on Twitter and that’s when things appeared to take a turn for the worst. Apparently, his encounters with “Dear David” in the beginning was just wanting acknowledgment from Ellis but then came a post with a chilling warning to all who do not take caution when dealing with ghostly encounters or the paranormal.

In the 2013 movie “The Conjuring,” which was based on Ed and Lorraine Warren’s encounter with a particularly nasty demonic entity torturing the Perron family, Ed Warren pointed out the three stages of spirit/demonic attachment or possession.

I believe Adam Ellis is now in the second stage of attachment and if he does not reach out for help, there could be menacing repercussions he is not expecting. Starting on August 7th of this year, here are some of his tweets. Take note of the tweet where he is warned of the danger.

Ellis got a better deal on an apartment upstairs and moves. These tweets then begin:

FYI: Ellis forgot about the warning and accidentally asked “Dear David” a third question one night and now fears for his life.

The Twitter posts have continued as Ellis decided to stay and have his curiosity get the best of him. He has awakened now with bruises on his arms, constant unknown callers, heavy breather calls and now when he asks who is calling, they say David in a tone of voice that immediately makes his hair stand up.

Assuming Ellis is telling the truth, he is now in the second stage and moving quickly into the third stage of spirit and/or demonic possession and attachment. Hopefully someone will encourage him to not consider this ghostly encounter as a form of Twitter entertainment and get help ridding himself of “Dear David”. Another reminder to not take the “unseen” for granted or use as frivolous entertainment.

Will I Get Back Together With My Ex?