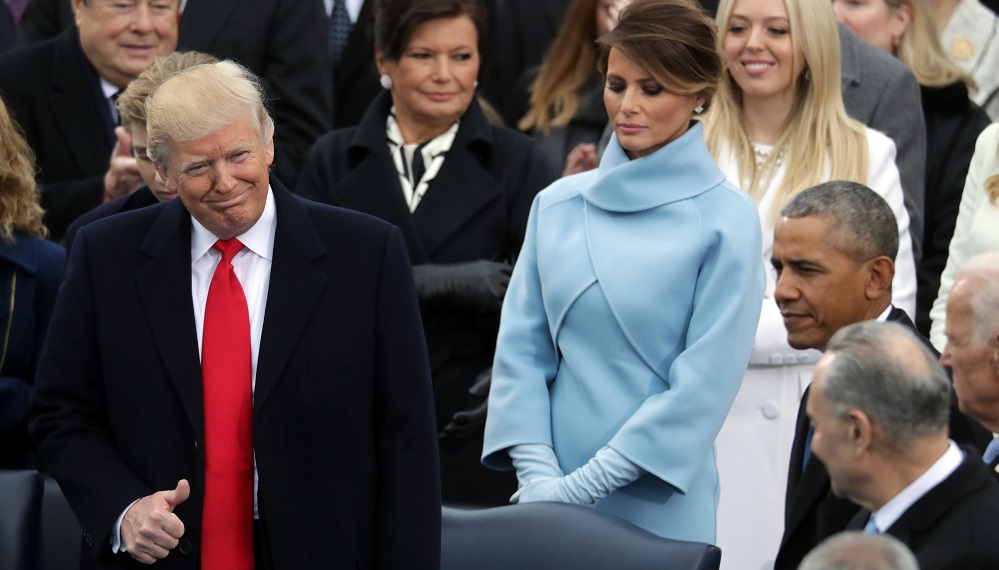 We are all too familiar with President Trump’s aggressive, pull your shoulder out of its socket, Neanderthal handshake when he took office and began to meet world dignitaries. Body experts had a field day interpreting the insecurity of that dominant handshake as it was so apparent he felt out of his league and had a point to prove. Maybe for the first time in his life! Then Melania Trump entered the picture and the body and etiquette experts had a field day on what is really going on in the relationship between the president and the first lady.

Here are some interesting observations from the experts on the interactions between the two since the time of their courtship in 1999 and now 12 years later.

What started the scrutinizing of their body language was the infamous inaugural fake smile at her husband to a break your heart face drop that had millions of hits on Twitter and everyone sending out their condolences to the new first lady as it was obvious she wanted to be anywhere but where she was. The running joke on Twitter became: “Rescue Melania!”

When Trump met with then President Obama and Michelle entering the White House for the first time, he left Melania behind and never once looked back to see where she was. Once again, their lack of any personal contact was under scrutiny after the two visited Pearl Harbor last Friday. It was pointed out that Donald was actually gripping Melania’s hand and not holding it as she had a closed fist with no fingers were intertwined.

“Normally, when you are connected to your mate, your spouse, your partner, you’d expect to see more of a connection between the two, because when you think about lives lost and then you have your life partner next to you, it does make you want to clasp that person a little tighter, hold them a little closer. For whatever reason, I don’t see that in this particular photo here,” stated a body etiquette expert.

She added, “It looks to me more like these are two people standing and posing for a photo opportunity. They’re obviously very cognizant of the fact that they’re being photographed. “Also obvious is that Melania is an object to Trump as I don’t see any warmth or true love and compassion in that relationship whatsoever, said another body etiquette expert.” When the two first started dating, a photo taken in March 1999, (and a few months before Donald Trump’s divorce from Marla Maples was finalized) shows a significant attitude of ownership with his arm completely encircling her. He is confident and proud and wants to be seen as a unit with her, and he’s got that look of pride, alpha pride. Her body language shows she is uncomfortable being caged in that way.

In a Manolo Blahnik Exhibition in 2003, a photo shows the two smiling but hers is a forced posed smile while on the other hand Donald very happy that she is on his arm.

From that point on, it is rare to find a photo of the two in which Melania is smiling. Almost 12 years into their relationship, you can see the breakage. There are the two incidences of her slapping Donald’s hand away from hers and the awkward kiss in the Final Iowa Campaign Rally in 2016. If ever two people did not want to kiss one another, it was them.

There is always tension in both their faces, and they never lean in together. It could be boredom or just cold but both of them always looked pissed. The contrast between former President Obama and Michele’s closeness makes it even more apparent this relationship is not a close or happy one.

Melania has been the subject of “be careful what you ask for” since Trump started running for president. It is obvious she was perfectly happy being the beautiful trophy wife of an uber rich man with all the perks that go with it. Living an opulent life can help one put up with almost anything if that is your agenda. Being first lady was definitely not on hers. I feel Melania was hoping she would escape having to cope with all the duties that came with having a husband as president but apparently not. It is obvious in her body language with him and his interactions with her, that she is pretty much invisible to Trump and her only value is her beauty and that she belongs to him. I feel she is royally pissed and has no way of expressing it and every once in awhile, that anger escapes through her body language with Trump.