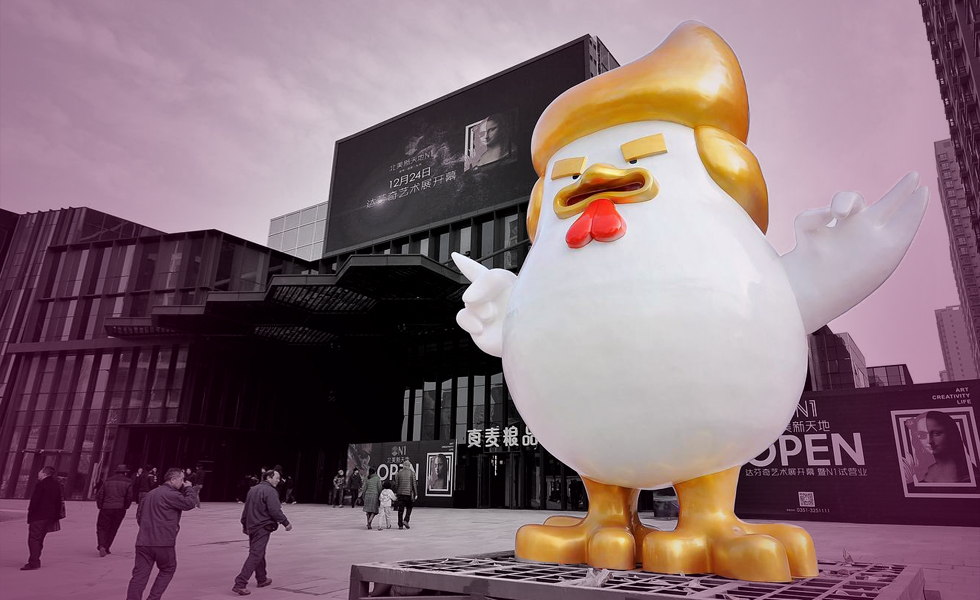 The city of Taiyuan in China has constructed a sculpture of a giant rooster as the locals prepare to bring in the Chinese New Year. The giant rooster stands three stories high and many people think that it bears an uncanny resemblance to Donald Trump with its swirling ‘blonde’ hair. Even its feathers mimic Mr Trumps hand gesture(s).

Not everyone finds Mr Trump amusing right now. Qingguo Jia, the Dean of Peking University’s School of International Studies has said that many people are worried. Diplomats and Academics have travelled to the US to gather insight into the new leader. Recent history has shown an understanding of what to expect from America’s President but there is an uncertainty with Donald Trump. Mr Jia said that never before has China sent so many people to the U.S. following an election. China’s leaders have more questions than answers right now. Such as?

Could there be a Trade War? Should they expect Military Confrontation?

China’s newspaper, ‘The Communist Party’s China Daily’ has reported that Beijing should ‘Take off the Gloves’ when dealing with Mr Trump.

So… How will the sign of the Dog fare in the year of the Rooster? Let’s look at some cards.

We have the Five of Wands, the Nine of Hearts and the Queen of Swords.

The Five of Wands
This represents a world of competition and conflicting views. Two leaders of competing forces face each other in this card and neither wish to back down. Although there is anger and frustration, the leaders are restrained in their dealings and hoping to gain a win through an error of the other.

The Nine of Hearts
This is wish card. This card bodes well for long term negotiations and attaining a goal through blessed circumstances.

The Queen of Swords
This shows that Mr Trump will demonstrate power and success with the insight of others. There is a female expert who should be listened to. This card advises following the rules rather than breaking them.

Mr Trump has been ‘gung-ho’ in his tweets and this has caused uncertainty for many. I feel that he will be ready to listen and learn.