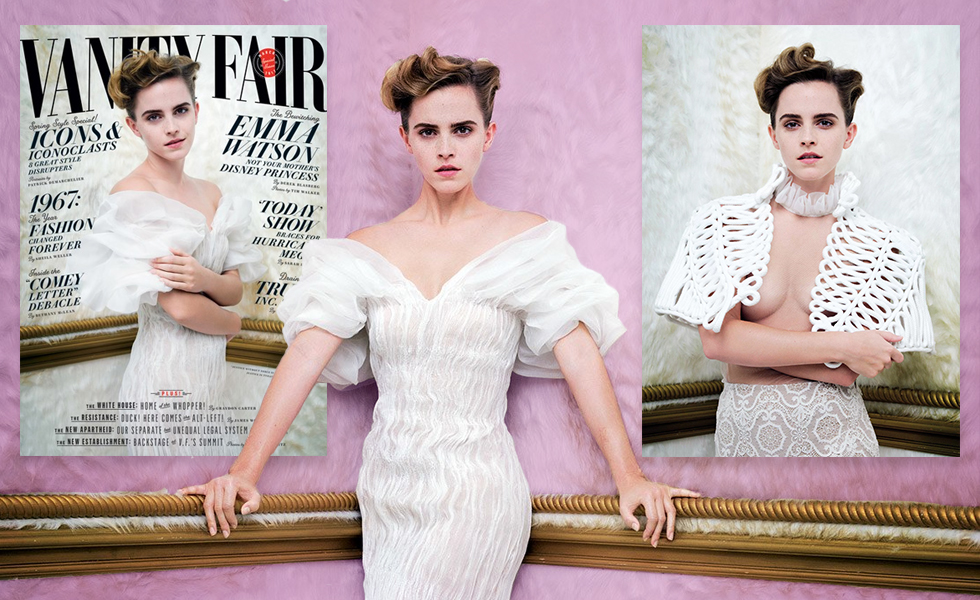 The new Disney movie Beauty and the Beast has caused quite a stir lately. The movie is coming out in mid March, and it is said to contain gay elements. Christian-run cinemas refuse to screen it for the very same reason. But, apart from Gaston and Lefou’s ‘relationship’, Emma Watson, leading actress also became the centre of attention.

Watson became a UN Women Goodwill Ambassador in 2014. Since then she has spoken to men, encouraging them to support equal rights for women. She even travelled to Bangladesh to help promote girls’ education. Which are all remarkable acts from the 26-year-old actress. She has certainly come a long way from her role as Hermione Granger on Harry Potter.

However, a recent photo of her wrecked havoc amongst her followers and other women. The actress posed in a white, ropy, see-through top that almost completely exposed her breasts. Some argued that she wasn’t a real feminist, because then she wouldn’t have done such thing. One of the tweets that caused an argument was from Julia Hartley-Brewer, a British radio presenter. She wrote: “Feminism, feminism… gender wage gap… why oh why am I not taken seriously… feminism… oh, and here are my (t*ts)!”

According to Watson, however, there is a major problem and it isn’t the display of her lady parts. It rather has to do with people not understanding fully what feminism truly means. She comes to our aid, by explaining: “Feminism is about giving women choice. Feminism is not a stick with which to beat other women with. It’s about freedom. It’s about liberation. It’s about equality. It’s not — I really don’t know what my t*ts have to do with it.”

So, what is the truth? Is Emma Watson a true feminist, or is it all hypocrisy? Let’s ask the cards.

The Fool:
Emma Watson has a free spirit. She is spontaneous and follows her heart, unaware of the consequences. She was surprised at the backlash, because she acted spontaneously this time as well.

Nine Wands:
This is the last challenge before ultimate success. If someone has strong views about something, their views will be constantly challenged. Today because of a see-through top, tomorrow it will be something else. Watson has the inner qualities to brush off these allegations.

Page of Cups:
This card represents the transformation of Watson. She is more open to new opportunities to express her emotions and personality. She is going to find creative ways to do so.

So, no, for her, appearing in a ropy top isn’t about feminism (and her t*ts). It’s all about self-expression and creativity. To her, both can walk side by side, and she doesn’t feel like her views should be taken any less seriously.

Emma WatsonfeministHarry Potter
Previous ArticleNew jobs for panhandlers in Portland. Is it a long-term solution?Next ArticlePokemon go on the go – A Dangerous Game?