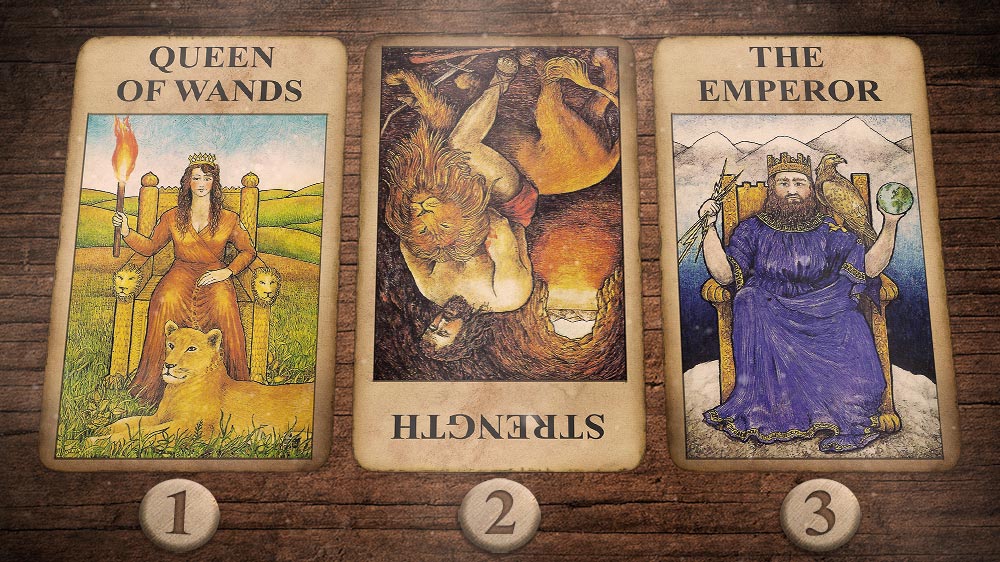 The lovely Queen of Wands turning up in your daily draw or any other tarot spread can be somewhat of a double-edge sword. She speaks of successfully handling multiple tasks at once but at the same time, she warns of taking on too much and possibly becoming overwhelmed. On the upside, this lovely lady speaks of being able to maintain and accomplish several projects or tasks at once while still remaining high in energy and fully capable of taking on even more. The Queen of Wands talks of an outgoing and overly optimistic frame of mind or of a person, usually a woman, who is such. She is always full of energy and constantly on the go. Be it for you or another female about whom you may be asking, this card talks of her accomplishing many tasks. She constantly has many projects in the works and is often full of surprises. Rarely does she need external stimulants to maintain this lifestyle such as medications, prescribed and otherwise, rather her extremely high energy level is all-natural. Some people may find interacting with such a woman to be tiresome and even overwhelming at times. She never knows when to stop. This card often represents a take-charge kind of woman, never one to sit on the sidelines or just simply go along for the ride. She’s all-too-often the one driving the bus. She never sits idly by as life passes her along. Women represented by this lovely queen are usually very well-organized and always going above and beyond to help others. She is efficient and almost always on time complete with bells on. As briefly mentioned above, the Queen of Wands may also turn up in a daily draw or tarot spread warning of creating a chaotic situation for yourself by trying to take on too much. It warns of forgetfulness due to taking on more than you can handle at any given time.

Reversed Strength will often turn up in a daily draw bringing your attention to the fact you are *settling* in some way such as not seeking out the job you most desire because you do not feel you are qualified or maybe you do not believe you would be able to learn the skills required to be successful. Maybe you are settling in a romantic relationship because you simply do not believe you could do any better so you will just take what you can get. This card speaks of a tremendous self-doubt and simply not knowing your own worth. Also, a key message behind Strength reversed is that it really is ok to cut toxic people out of your life, even if they are relatives or someone else who believes they somehow have a right to treat you harshly or always make derogatory comments to you and about you. Strength falling reversed for you in a daily draw could also indicate that you very much need to call upon your own inner strength that you may not realize you possess rather than allowing a lack of self-esteem, self-worth, fear or anxiety to hold you back. This is quite often the case in professional pursuits and occasionally when having a strong interest/desire in someone romantically. Stop holding yourself back. As the saying goes, “We miss 100% of the shots we do not take.” Shoot! Take a chance otherwise you will most likely have regrets from now on and you may never find the happiness you so desperately want, need and deserve. Also, learn to find the positive in ANY situation no matter how incredibly dark and negative it may be. No matter the situation. Look beyond the pain, disappointment and heartache. It is always possible to find positive even in death if you think more objectively. The positive is what gets you through while the adversity makes you stronger. Pertaining specifically to love, Strength reversed talks of how a low sense of self-worth or opinion of yourself will lead to a vicious cycle of one terrible relationship after another due to your own poor choices and settling as mentioned above. This lack of self-worth will often lead to people looking for problems in even the best of connections because they simply do not feel worthy of anything good in their lives. Stand up for yourself! Know your worth, professionally and personally, at all times. Never lose sight of who you truly are and do not ever settle. Always be striving for bigger and better in all things. You deserve it!