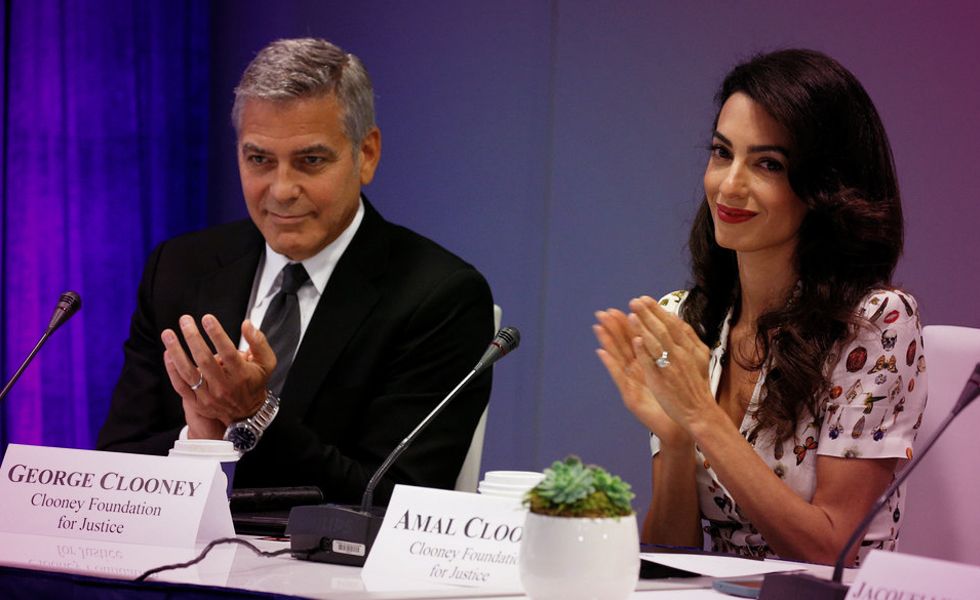 George And Amal Clooney Give $1 Million To Fight Hate In The U.S.

George Clooney the actor and Amal Clooney, a barrister who specializes in international law and human rights, are a powerful voice when it comes to fighting injustice not only in the U.S. but the world. They are putting their money where their morals are and have donated $1 Million to the Southern Poverty Law Center in the wake of the white supremacist violence in Charlottesville, Virginia. On Monday, the Southern Poverty Law Center (SPLC) announced it had received a $1 million grant from the famous couple, courtesy of the Clooney Foundation for Justice. The announcement cited the violence sparked by a white supremacist rally in Charlottesville, Virginia, this month as an indicator of a greater need to combat hate groups.

The Charlottesville violence left 19 injured and one woman, 32-year-old Heather Heyer, dead. The $1 million grant is part of a joint initiative with the non-profit SPLC to prevent violent extremism in the U.S and monitors the activities of domestic hate groups and other extremists, currently tracking more than 1,600 extremist groups operating across the country. It has used litigation to win court judgments against 10 major white supremacist organizations and 50 individuals who led them or participated in violent acts. “We are proud to support the Southern Poverty Law Center in its efforts to prevent violent extremism in the United States,” the Clooney’s said. “What happened in Charlottesville, and what is happening in communities across our country, demands our collective engagement to stand up to hate.”

George Clooney has always been a class act and actively involved in humanitarian rights. Teaming up with his wife Amal Clooney makes them a powerful force to be reckoned with in bringing to light the injustices hate creates in the world.

King of Swords:
Contracts made and advice given. The card can also represent a cruel person in charge. I feel this card was drawn to represent legal actions being made to stop the people and the groups who deal in hate.

Three of Wands:
Inverted (Upside Down)
Good results in a business venture and growth and expansion. Since pulled inverted, it shows stopping the hate groups from getting any bigger or having more power.

Four of Cups: Inverted
Feeling stuck and bored. I believe the Clooney’s contribution is just the beginning of those with voices and financial power to start a movement to stop the acceptance of hate as part of our culture.

What Do Star Signs Say About What Kind of a Mother Someone Is?