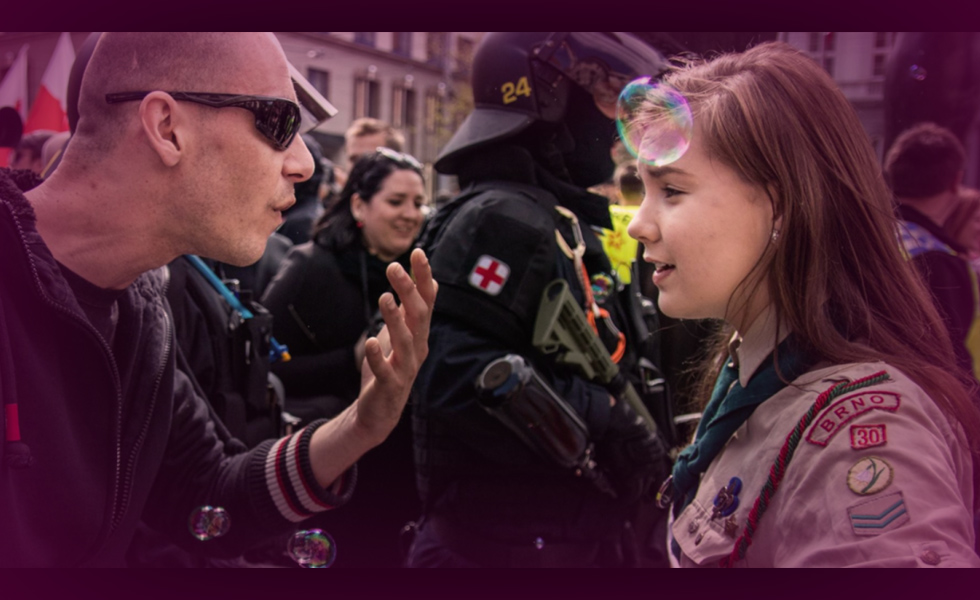 May we all be as cool, calm and collected in the face of hate. On May 1, a Girl Scout in the Czech Republic showed us what resistance looks like. The girl scout, Lucie, squared off with a neo-Nazi at a far-right rally in Brno, Czech Republic and like many badass women before her stayed calm, cool, collected. The photo, taken by Vladimír Čičmanec, was posted on the World Organization of the Scout Movement Facebook with a caption about how the Scouts showed up to the march in protest for the far-right to champion peace and diversity in the face of hate. “People from all walks of life, and #Scouts among them, came to the streets during an extreme right march yesterday to express their support for values of diversity, peace and understanding.” The caption read, “Lucie, a Scout from Junak in discussion with a supporter of extreme right movements, in Brno” (#CzechRepublic).

Another incident of a young woman facing down hate with a smile was Saffiyah Khan. She was captured in a striking image at a Birmingham protest. She explained why she was in the confrontation with the man. Ms. Khan said she had been trying to help another woman who was surrounded by a large group of men. But the EDL claimed she had interrupted a minute’s silence for terror attack victims. Ms. Khan told the Mirror she had remained calm during the tense encounter with the EDL leader identified as Ian Crossland. She said: “The EDL supporter was poking his finger in my face, but I just stood there. I didn’t do anything, I wasn’t interested, that wasn’t my intention. “I couldn’t understand what was being said though to be honest, it was all very mumbled. But I wasn’t scared in the slightest. I stay pretty calm in these situations. I knew they were trying to provoke me, but I wasn’t going to be provoked. I didn’t realize how many people would be so supportive, so it was worth it.” Ms. Khan’s actions won praise from Birmingham Yardley MP Jess Phillips, whose tweet of the photo was shared more than 9,000 times. Keep smiling down the hate, Lucie and Saffiyah.

What world effect did these two powerful female encounters between love and hate have?

Extremely powerful! Visual images give off energies that force the person seeing them to respond. Having the body language of love and hate side by side can open many eyes.

Ten of Swords: This card represents a hard and stressful life situation. The card says it all about the energies that happened at the moment. Nothing is more effective against hate than refusing to participate in it.

King of Swords: Inverted (Upside Down) This card represents a contracted purpose from a cruel person. Because the card was inverted I feel it represents the angry men spouting hate that did not get the results they were hoping for.

King of Pentacles:
This card represents a successful man whose material possessions play a big part in their value. I feel this card shows the core fear issues of the hate groups. That “others” are taking something away from them.