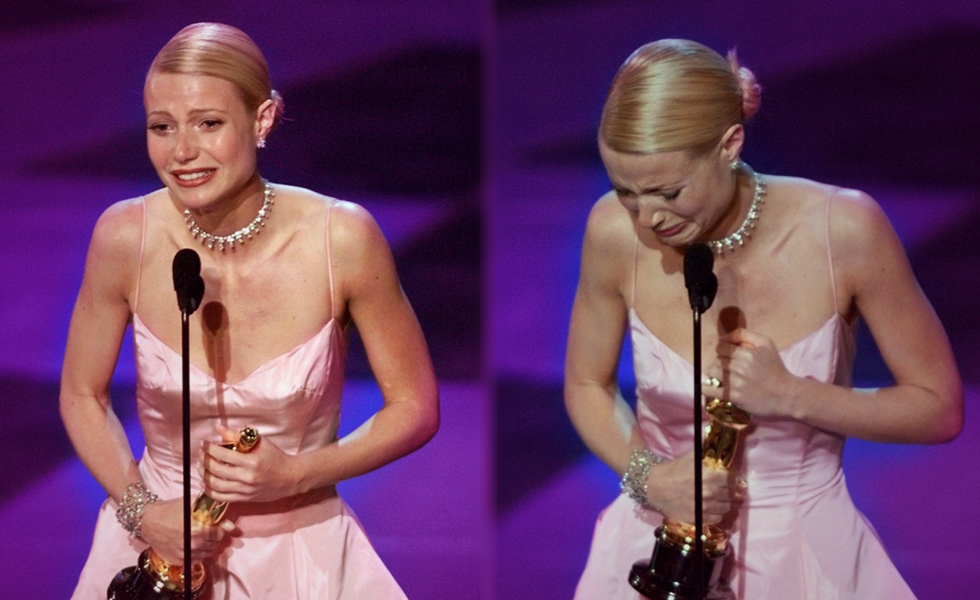 When Gwyneth Paltrow does something, she does it in her own inimitable style. It was almost twenty years ago when Gwyneth’s portrayal of Viola De Lesseps earned her the first Oscar of her career. Shakespeare in Love was the film, and the award was for best Actor. As Viola, Gwyneth helped depict the imaginary love affair between Viola and Mr Shakespeare during the time of him writing Romeo and Juliet in the 1998 Rom-Com.

Gwyn was humble and her tearful acceptance speech was privileged sincerity as she stood picture perfect in a pink Ralph Lauren dress. Gwyneth thanked everyone and I mean everyone, saying that she would not have been able to play the role of Viola if it hadn’t been for the familial love of a tremendous magnitude. Did Gwyneth’s Oscar worthy acceptance speech overshadow the actual award(s)? The picture won 7 academy awards and yet this is the one that everyone remembers.

These days, people have less tolerance for that kind of sincerity. They want decent humanistic honesty and vulnerability but without the blubbering. To be fair to Gwyneth, she has more of an understanding of her authentic self these days and lives in nobody’s shadow.

If Gwyneth had her Oscar time again, would she feel less grateful and more deserving since she had earned the Oscar fair and square? Let’s look at the cards.

Gwyneth drew the Eight of Pentacles, the Temperance card and the World.

The Eight of Pentacles
This represents the well-constructed career of Gwyneth’s own making. Yes, Gwyneth had excellent credentials and the right connections within ‘showbiz’ but it was her body of work in the film that won her the Oscar.

The Temperance card
This represents global opportunities. Patience and timing were key in Gwyneth’s career plan and the award was the best reward at the best time.

The World
This represents many things to Gwyneth, the world was her stage, she had everyone hanging onto her every word and achieved worldwide success. Real success was achieved by her own merits.

Today’s cards reveal that Gwyneth was as authentic then as she is now. Whether people applaud her Oscar’s acceptance speech or find it cringeworthy. I don’t feel that she would make huge changes if she had her time again. She is who she is!