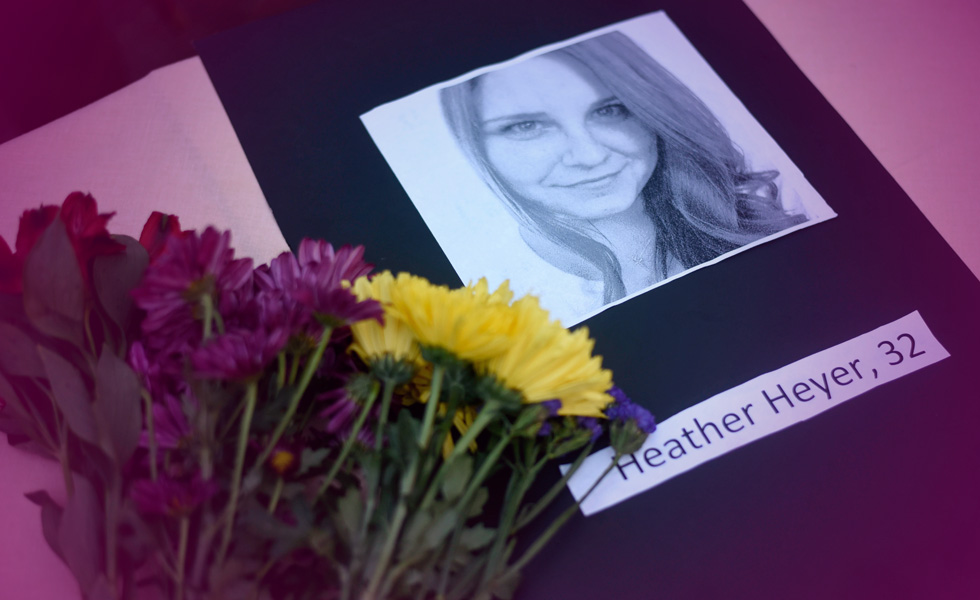 Susan Bro, whose daughter Heather Heyer was killed by a car at a white supremacist rally in Charlottesville, Virginia, last weekend, says she won’t be speaking to President Donald Trump today or any other day. Heather was walking along or across a street when a Dodge Challenger slammed into pedestrians. Heyer was killed, and 19 others were injured. “I have not [spoken to Trump], and now I will not,” Bro said on ABC’s “Good Morning America”. Bro said the White House tried to reach out to her multiple times the day of her daughter’s funeral and she simply missed the calls. But after seeing a video of Trump’s Tuesday press conference where he defended the white supremacists and put as much of the blame of the violence and her daughter’s death to the counter-protesters, Bro said she doesn’t wish to speak to him. “I hadn’t really watched the news until last night, and I’m not talking to the president now,” she said. “I’m sorry. After what he said about my child, and, it’s not that I saw somebody else’s tweets about him, I saw an actual clip of him at a press conference equating the protesters like Ms. Heyer with the KKK and the white supremacists.”

During his press conference, Trump argued: “both sides” in Charlottesville were responsible for the violence.
“You had a group on one side who was bad, and you had a group on the other side that was also very violent, and nobody wants to say that, but I’ll say it right now,” Trump said before also commenting that there were “very fine people on both sides.” Bro said she’s “not forgiving” Trump for the remarks. “You can’t wash this one away by shaking my hand and saying ‘I’m sorry,’” Bro said. Her daughter, Heather Heyer, once posted on Facebook an anonymous quote that resonated after her violent death:
#”If you’re not outraged, you’re not paying attention,” the quote, displayed on a purple background, reads.
Her mother made that quote the foundation for a call to action at Heather’s memorial service.

Susan Bro also spoke at a gathering in the 1,000 seat Paramount Theatre. She spoke with passion to the crowd saying: Heather Heyer died fighting for what she believed in.” “They tried to kill my child to shut her up. Well, guess what? You just magnified her,” Susan Bro said to loud applause. Heyer’s friends have said she joined the counter-protesters to oppose racism and injustice. Her mother pointed to the Facebook message that Heyer posted in November. “I want you to pay attention, find what’s wrong … and say to yourself, what can I do to make a difference?” Bro said. “And that’s how you’re going to make my child’s death worthwhile. “I’d rather have my child, but by golly, if I’ve got to give her up, we’re going to make it count.” “To make her life impactful, we need to move forward.” ‘She wanted equality.’ The racial diversity of those in the auditorium reflected Heather’s embrace of people of all colors. “It didn’t matter who you were or where you were from,” Mark Heyer said. “If she loved you, that was it — you were stuck. For that, I’m truly proud of my daughter.”
Many wore purple — a color she loved.

If we quietly and silently mourn our losses when bombs go off, road rage killings, rifle assaults and stabbings of our friends, family, and co-workers, we allow it to continue. Get loud, make speeches, march and never let them forget who was lost by the hand of hatred. Susan Bro is doing just that.

Judgement:
Change is coming. The card indicates more and more people are not willing to sit quietly now and say “that’s not my problem” as we watch horrified while the hate spreads to our backyard and family.

Ace of Pentacles: Inverted (Upside Down)
Financial gain and new self-worth. I believe this card shows what exposing white supremacy in the media does. It shames the participants and often as we have seen from the Charlottesville rally, cause the loss of jobs after their pictures are posted on Facebook.

Eight of Cups:
Disappointment and leaving an unhappy situation. Drawing this card shows hope for change in people’s realization of how the ideal of white supremacy can lead to hate and violence. It is no longer “their problem” but now becoming a hometown backyard epidemic.