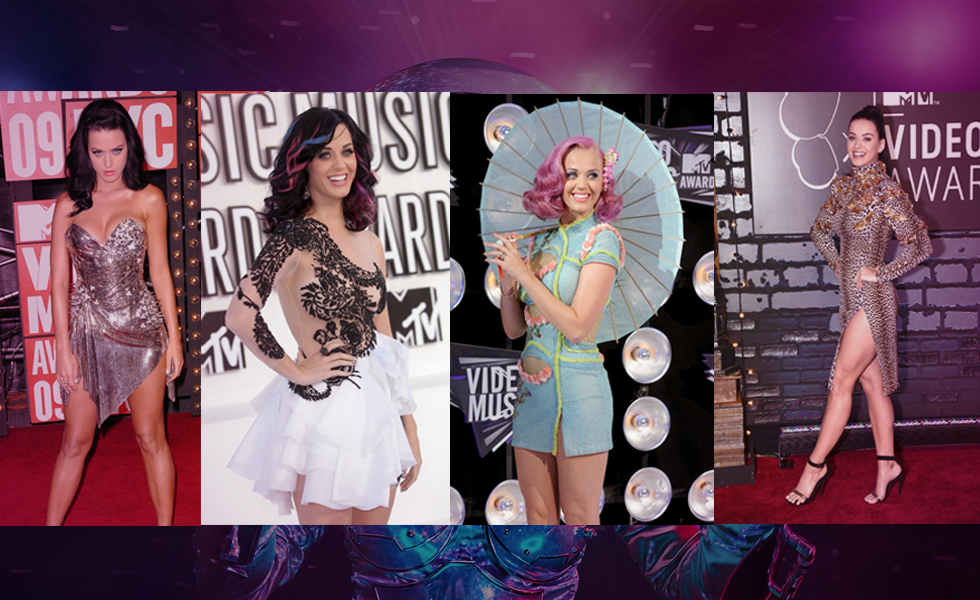 Katy Perry has made her mark at the MTV Video Music Awards since 2008. The award show has a spotty record of decent emcees and only a few memorable ones, with those being the most outrageous…“Miley, what’s good?” heard ’round the world in 2015. A newly blond Katy Perry is probably hoping she avoids similar callouts this Sunday as she takes the mic for her gig. There’s no telling whether she’ll show up in a space suit, as VMAs promos suggest, or whether the pop star’s wardrobe will be as daring as Miley Cyrus’ but we do know one thing for sure, she has the ability to make it memorable. Going down memory lane on her appearances, there is no telling what her agenda will be this Sunday.

2008: Katy Perry was an up-and-coming pop singer, known mainly for the breakout success of “I Kissed A Girl.” Perry was nominated for five awards, hung out with Miley Cyrus and pre-catfight Taylor Swift. (gasp!) 2009: Russell Brand hosts the awards and it is what brought them together. The pop star earned only one nomination that year — Best Female Video for “Hot N Cold” — but lost to Taylor Swift’s “You Belong with Me.” Brand would later quip about Perry’s loss, “Katy Perry didn’t win an award and she’s staying at the same hotel as me, so she’s gonna need a shoulder to cry on. So, in a way, I’m the real winner tonight.”
2010: The year of Russell Brand NAILS. Perry showed up at the VMAs with a Brand-themed manicure.
She explained that the manicure was in honor of “the 1-year anniversary of our love.” By then, she and Brand were engaged, and Perry told MTV, “my hubby-to-be is on my nails!”.

2011: She finally makes a win, no not just a win but three wins. After three years of being nominated, she finally takes home three Moonmen. Perry also walked the carpet with Brand wearing an “Asian inspired ensemble to mixed appreciation and offense. That’s Katy Perry!
2012: Perry had already split from Brand citing “irreconcilable differences” at the end of 2011 after just 14 months of marriage. Perry was up for Video of the Year, Best Art Direction and Best Visual Effects for “Wide Awake” and Best Female Video for “Part of Me” and mad a big deal of planting kisses on two members of One Direction from the stage.
2013: Apparently this was the year of the cat for Perry at VMA’s. She was there to promote “Roar,” the lead single off of her album “Prism.” Naturally, she went hard on the big cat theme, sporting head to toe leopard print on the red carpet.
2014: Denim was the theme that year, recreating the Britney Spears and Justin Timberlake nauseating matching outfits from the 2001 VMS awards with rapper RiffRaff. The “Dark Horse” singer even sent a tweet to Spears, writing, “I did my best impression, hope u likey!” Spears told Perry she “looked amazing.” Of three nominations that year, Perry took home one for Best Female Video for her collaboration with Juicy J.

The MTV Video Music Awards will air Sunday, Aug. 27 and you can bet Katy Perry will not disappoint us. She has had a rough year and has not put out any substantial top billboard music hits since 2015 after a string of number one albums from 2008 to 2014. Besides hosting, she is nominated for five categories this year. So, it could be a good show for her all around.

Queen of Swords:
Inverted (Upside Down)
Woman with straight answers and knows what she wants but may have hurtful scars from the past. Since pulled inverted, I feel it shows Perry still has not mastered her personal life yet but she is driven where her music is concerned.

The Hermit: Inverted
Going within and isolating oneself to get new footing on a situation. I think Perry took some time off to just enjoy life and do some personal R&R and now she is ready to come back into the spotlight full steam.

The Emperor:
Inverted, This is male energy who is controlling, powerful and always needs to have the upper hand. Being pulled inverted may show she has finally realized the difference between control and true power in relationships.