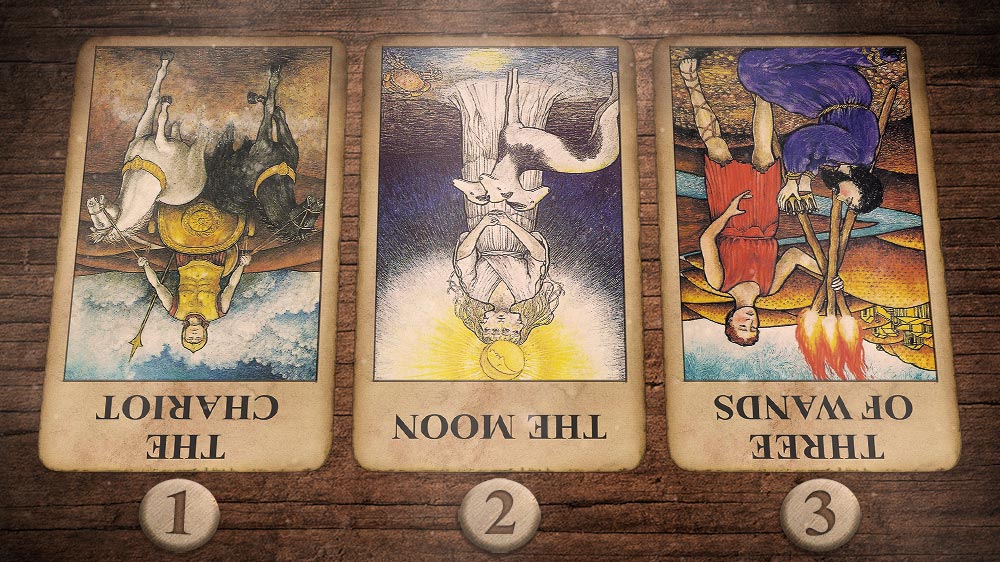 When The Moon is presented right side up in your daily draw, it shows a picture of the moon pouring down onto two figures. Consequently, when The Moon is reversed, everything that has poured down is now being released. This could be any negative feelings, such as unhappiness or depression. This could also refer to any secrets or any form of deception around you, and this could also indicate toxic people being removed from your life. Very recently, or some time in the near future, you will begin to feel more at peace with yourself and your surroundings as things that have been pulling you down are being released from your mind and atmosphere. Have you recently had a friend pull away from you? Have you recently experienced a sudden shift in moods and overall outlook? Whatever negativity you have experienced, you will feel a huge weight lifted as it releases itself. If you have been experiencing increasing bouts of unhappiness and depression, now is the time to focus on restoring yourself and keeping your mind clear. You should take some time to meditate, or just some quiet time to yourself to refocus your energy. When presented in a love reading, The Moon, reversed, usually indicates deception or infidelity being exposed. Whether it is your partner who has been unfaithful or deceptive, or it is actually you who has not been loyal to your relationship, this deceit will soon come to the surface, and you will be faced with the consequences. Should this be the case, it is very important to remain clear and levelheaded upon this deception being revealed, in order to avoid any further negative consequences.

The reversed Three of Wands speaks most basically of coming home. It talks of returning home from long or distant travels, moving back home be it literal or figurative to your old family home, your hometown or your old neighborhood. A figurative returning home such as rejoining your clan/family/old friends from way back when or embracing an old way of life all over again. There are also several quite negative aspects to the reversed Three of Wands such as failure, lack of progress as well as a lack of adventure and or growth, restriction. This card reversed also talks about being unhappy with your choices or disappointed with the outcome of your situation. The reversed Three of Wands also signifies a lack of foresight or forward planning or holding on to the past and being haunted by it. This card talks also of lack of confidence, self-doubt, frustration, clipped wings and shying away from life. It can also represent failed holiday romances or failed long distance relationships. When seeking guidance or answers on romantic matters and you are currently in a romantic relationship, the Three of Wands reversed is not a good omen as it signifies lack of progress, lack of growth or being disappointed with your choices so your relationship may not be going well when it appears. You may be feeling stifled or oppressed or as though you simply cannot allow your own light to shine.

Soul Windows: How To Recognize Your Transmuting Life Phases