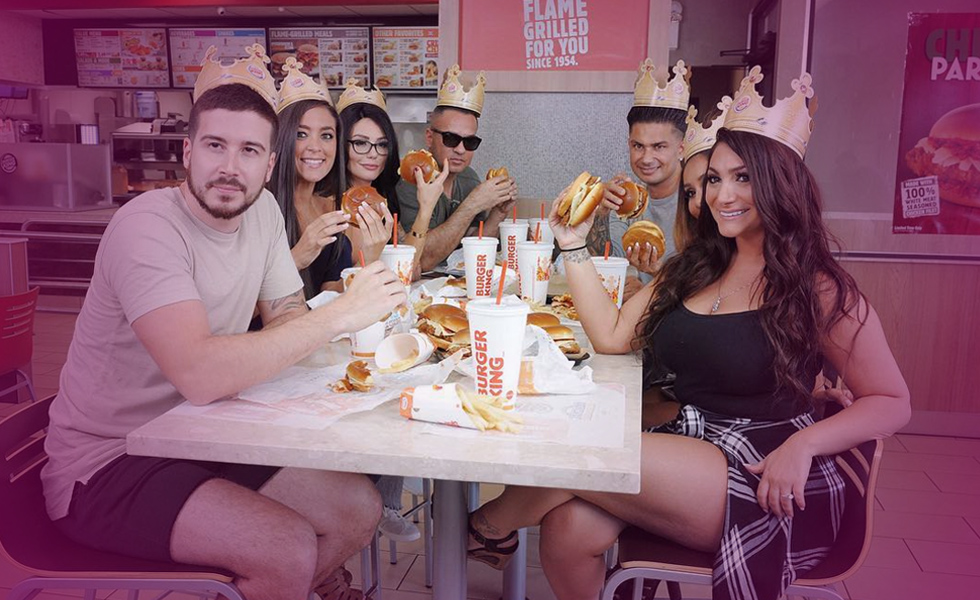 Rumors that the stars of the MTV reality hit were getting back together surfaced earlier this month after sightings of the cast were reported to the Asbury Park Press. The speculation increased with the news that the company that produced “ Jersey Shore ”, Bright Road Productions, had applied for a permit to film in Asbury, New Jersey, under the title “Reunion Roadtrip.” After weeks of speculation, Jersey Shore’s Mike ‘The Situation’ Sorrentino confirmed the reunion and says the cast is ‘excited to be working together again’ to reunite for a new E! docuseries. The year was 2009 when the world inexplicably revolved around a group of tanned to a crisp 20-somethings hellbent on doing the absolute most in a summer share on the Jersey Shore. In the years since, Snooki, JWoww, The Situation, Pauly D and the rest of the gang have gone on to do great things (DJ, tax evasion, an episode of “Supernatural”) but of course fans have been waiting for the day the cast GTL-ed together once again.

The reunion will be the first edition of the E! docuseries that intends to bring casts from unscripted and scripted series back together for future episodes. “Viewers will follow the lifelong friends as they come together to gossip about each other’s lives, what has been said about them in the press, the juiciest moments and stories we never saw behind the scenes, and most of all talk about the pop culture hit that has bonded them forever,” the report reads. The news comes following weeks of speculation about a reunion, as various “ Jersey Shore ” cast members shared group photos on social media. In true “ Jersey Shore ” fashion they even reunited to promote Burger King’s new line of chicken parm sandwiches, because of course they did. Pictures uploaded on social media by the cast also revealed that the former party animals were hanging out once again. Nicole “Snooki” Polizzi posted a shot of herself with Jenni “JWoww” Farley, Sammi “Sweetheart” Giancola and Deena Cortese, and captioned it “Reunion Time” with a dancing girl emoji on June 29. Sorrentino also cryptically tweeted, “Up to Something” with a throwback photo of the cast of the reality show that ended in 2012, as well as two videos posted on Instagram of the Jersey Shore crew hanging out and taking shots. Well, it’s nice to see everyone getting along: Sorrentino, who once famously feuded with Polizzi, was seen giving her a big hug in that new Burger King commercial. Let the party begin!

Reality Show Reunions Are Big Now, So Why Not The Craziest Front Runner Of Them All!

I actually believe the reunion docuseries will do very well. Everyone was so fascinated with these young Jersey Shore party animals and their outrageous antics. I feel it will ride for a short-term series success as it has been 5 years and they are married, mommies and daddies and actually have real jobs now. And although I say it lightly, might have done some growing up so I don’t think you will be seeing any drunken brawls happening.

Eight of Pentacles: Inverted (Upside Down)
This is working hard at a life situation. Since pulled inverted, the card picks up the energy of the original show that started in 2009 which showed all of them NOT working very hard at anything except partying.

Three of Wands: Inverted
This is good results in business, travel and growth expansion. Since pulled inverted, it fairly states why most of them agreed to the show as I do not think any of them have recreated the financial success they once had with the show.

Two of Swords: Inverted
This is a card of stalemate and not able to make a decision. Since pulled inverted, I believe not everyone was on board with the idea at first but finally got talked into it.

Jersey Shore
Previous ArticleLinkin Park Frontman, Chester Bennington Dead At 41Next ArticleIt Is The Women Who Are Winning In “ The Game Of Thrones ” Series