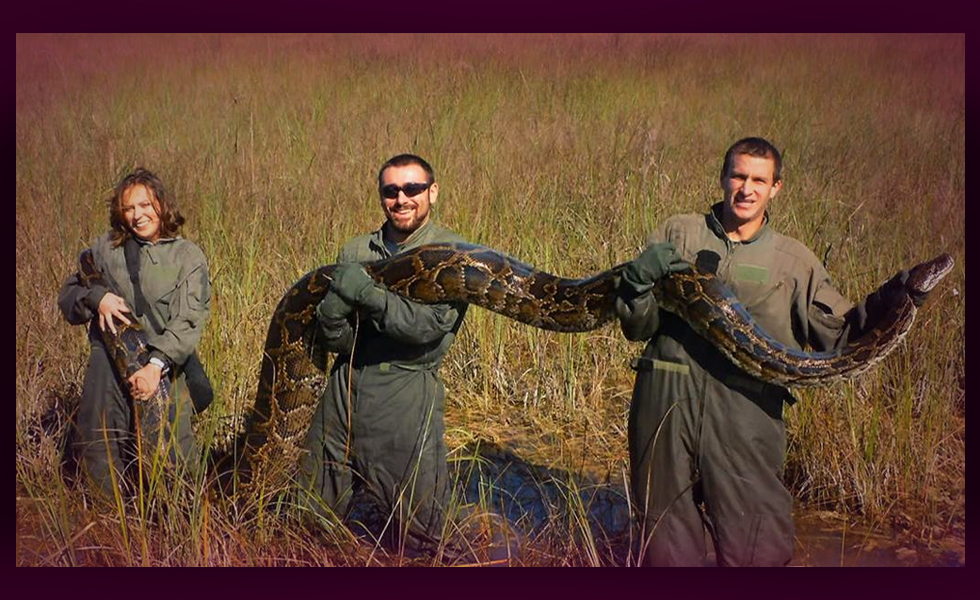 Do you live in Florida? Are you in need of some extra cash? Then this job is for you. This could be the slogan of the South Florida Water Management District’s pilot program. They pay you $8.10 an hour for your efforts, with additional bonuses for a job well done. So, what is this ‘dream job’?

Why, python hunting, of course. Burmese Pythons aren’t native in Florida and yet they are there to reduce wildlife. The District has been fighting against the snake population for several years. Until they came up with the ‘perfect’ solution: amateur snake hunters. Anyone could apply and from the 1,000 applicants, a lucky 25 were selected.

Those who missed the opportunity of this easy cash shouldn’t worry. The program isn’t the first nor the last python challenge. Although this one lasts for 2 months, watch out for further adverts. Then again, people aren’t in it for the money, but to help the environment.

Some of the residents have never killed in their life (thank God). Especially not snakes. They don’t have training in tracking these animal, but they are fuelled by a superior motive. Is that going to be enough for applicants to overcome their reluctance to ‘kill’? The district certainly hopes so. During another hunt 174 Burmese pythons were eliminated.

Donna Kalil, one of the 25 is a real estate investor by day and a python hunter by night. She said she thinks about all the lives she saves by killing the beast. Let’s ask the cards to see whether the hunt will be a success. Do you think it’s justified to hunt these snakes with knives, handguns and the sorts? Are they predators that deserve to die, or are they innocent, purely living up to their nature?

Justice:
Justice will be served. People have to decide for themselves whether they can account for their own actions. Does the end truly justify the means? It does, if people have the best interest at heart. Well, if they don’t go killing snakes for the sake of the money alone, that is. Their actions need to be fuelled by pureness.

Knight of Swords:
This card represents the adventure behind the task. Those who participate feel the rush of adrenaline, the excitement of the chase. There is no stopping the hunters now.

The Fool:
They are lead by an immense energy that radiates from deep within. However, they fail to see the obstacles along the way. They are oblivious to the fact that there are so many things they don’t know about pythons. The new adventure is all they have in mind.

Searching For Your Family Soul Tribe