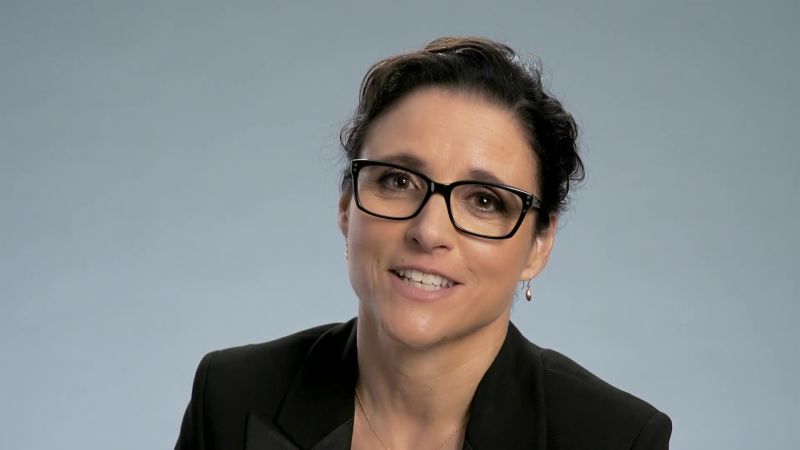 Julia Louis-Dreyfus is one of the funniest women on TV. She has held that spot since her ten-year run as the snarky, insecure, self-indulged character of Elaine on the TV series Seinfeld, from 1989 to 1999. She is now using that humor, grace and talent to play her real-life character of a woman who has it all and now diagnosed with breast cancer.

Julia Louis-Dreyfus announced she had breast cancer last month, reportedly learning of her diagnosis the day after she won her sixth-straight Emmy for Veep.

“1 in 8 women get breast cancer,” she wrote on social media. “Today, I’m the one.” She is definitely showing breast cancer who’s boss!

In a posted Instagram, the Veep and Seinfeld star struck a feisty note dressed in a funny getup of hoodie, sunglasses and drawn-on mustache. She wrote that she had just finished her second round of chemotherapy, quoting Katy Perry’s “Roar” to amplify her determination to fight the disease.

Chemo #2: finito. We are NOT fucking around here. “I’ve got the eye of the tiger. The Fighter dancing through the fire cuz I am a champion and your’re going to hear me ROAR.” Thanks to @mrtonyhale & @timothycsimons & @katyperry for their hilarious and loving inspiration.

Louis-Dreyfus has now also broken a record for her wins in the Outstanding Lead Actress in a Comedy Series category. She is the first actor or actress to win an Emmy six times in a row for the same role. Louis-Dreyfus has been consistently winning for playing Selina Meyer on HBO’s Veep. During her acceptance speech she called her part on the show the “role of a lifetime.”

She already had the most victories in that category, winning for her role in the show, The New Adventures of Old Christine and Supporting Actress award for Seinfeld. It was her 10th Emmy win overall. Her 2017 Emmys acceptance speech was also a moment for Louis-Dreyfus to reflect on President Donald Trump. She claimed that the next (and last) season of Veep had planned a “whole storyline about an impeachment” that was ultimately abandoned because “someone else may get there first.”

Louis-Dreyfus has used some of her recent acceptance speeches as platforms to speak out against policies enacted under President Donald Trump’s administration, making her call to enact universal health care around the country in her announcement of her diagnosis unsurprising.

In January, as she accepted her Screen Actors Guild Award for Best Actress in a TV Comedy, Louis-Dreyfus spoke out against the Trump administration’s immigration policies. “I want you all to know that I am the daughter of an immigrant,” she said. “My father fled religious persecution in Nazi-occupied France, and I’m an American patriot, and I love this country, and because I love this country I am horrified by its blemishes. And this immigrant ban is a blemish and it is un-American.”

Apparently, she is a fighter and an advocate of doing the right thing on all fronts.

Julia Louis-Dreyfus has already shown her acting chops as a consistent winner. She has a happy marriage and leaves the Hollywood drama to others. It looks like she is taking that same attitude in healing breast cancer. I have no doubt she will be a winner in this also and an inspiration for other women sharing the same path.

Tarot For Healing After A Breakup