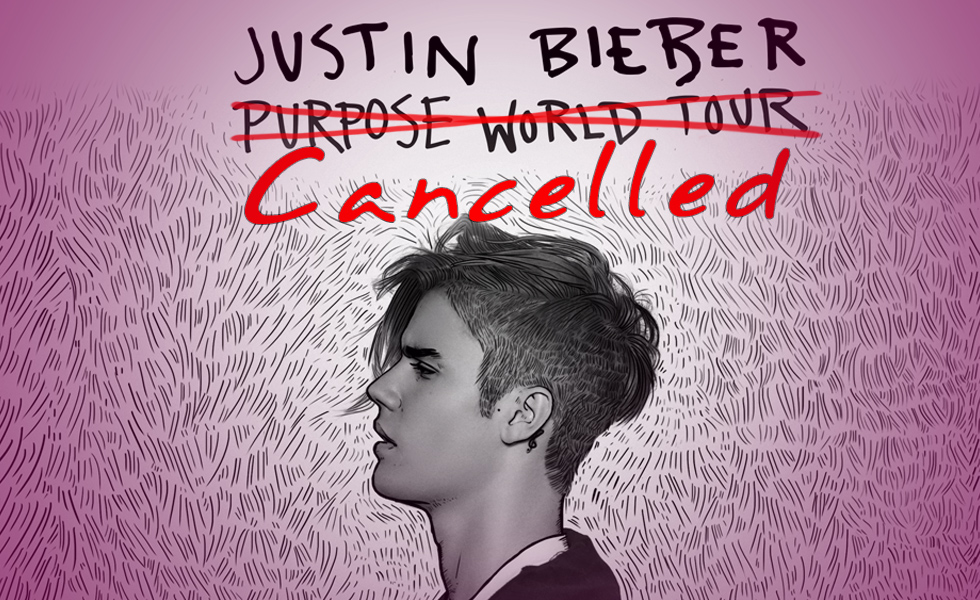 It seems the 23-year-old has had enough of performing live this year and has decided to pull out of his extensive global tour more than two months earlier than expected. His representatives released a statement on his official site to explain the situation, citing ‘unforeseen circumstances’ but it sounds like it might just be plain old burnout. Bieber has been touring since May of last year in promotion of his fourth studio album, “ Purpose.” “Justin loves his fans and hates to disappoint them,” his team said in a statement, “He thanks his fans for the incredible experience of the Purpose World Tour over last 18 months. He is grateful and honored to have shared that experience with his cast and crew for over 150 successful shows across 6 continents during this run.” “However, after careful consideration he has decided he will not be performing any further dates.”

The news comes just days after China decided to ban the pop star due to past “bad behavior.” Prior to canceling, Bieber had previously planned to get back out on the road, first with seven dates in six U.S. cities before jetting off to Canada, Japan and Southeast Asia. Even without the final leg, he’d pulled in more than $250 million in ticket sales between the beginning of the tour in 2016 and the middle of this year. The remaining 14 dates spanned from his July 29th show at the AT&T Stadium in Arlington, Texas to his appearance at the National Stadium in Singapore on October 7th. The dates also included shows in the Philippines, Hong Kong, Japan, Canada and US cities like Denver, Minneapolis and Pasadena. TMZ caught up with Justin in Santa Monica to hear what he had to say about giving up the final leg of his tour. ‘Everything’s fine’, he insisted. ‘I’ve been on tour for two years. I’m just resting, getting some relaxation, we’re gonna ride some bikes.’ He also added a short message to his fans. ‘I love you guys, I think you guys are awesome’, he said. ‘Sorry for anybody who feels disappointed or betrayed.’ In all fairness, he hasn’t felt his best over the last few months. His gig at the British Summer Time Hyde Park festival earlier this month was quite a struggle for him as he was battling a particularly nasty summer cold. Maybe a break is best for everyone! According to Bieber’s team, fans will be able to refund their tickets.

Even At 23 Years Old, Two Years Of Non-Stop Touring Can Take Down The Strongest!

Bieber has been fairly well behaved on this tour with only a small incident here and there, so you have to give him credit for curbing his temper tantrum throwing, diva bad boy ways but I believe it is exactly as he is calling it, he is tired and burnt out. I also feel he is trying to find himself through a more calmer and spiritual way.

Six of Wands: Inverted (Upside Down) This is a victory card. Since pulled inverted, I feel his tour was a phenomenal success but also came at some personal expense on Bieber’s health and wellbeing.

Seven of Swords: Inverted
This is avoiding an issue or running away from commitment. Since inverted, I believe that Bieber wanted to finish the tour but made the tough decision for his own peace of mind and health. I do not feel it was in anyway an impulsive decision of “I just don’t want to do this anymore, so I quit”.

Five of Pentacles:
This is a card of low self-esteem issues and poverty mentality. It can also indicate health issues. I feel Bieber put off ending the tour for two reasons: he did not want to disappoint his fans and also the monetary factor of losing substantial income.