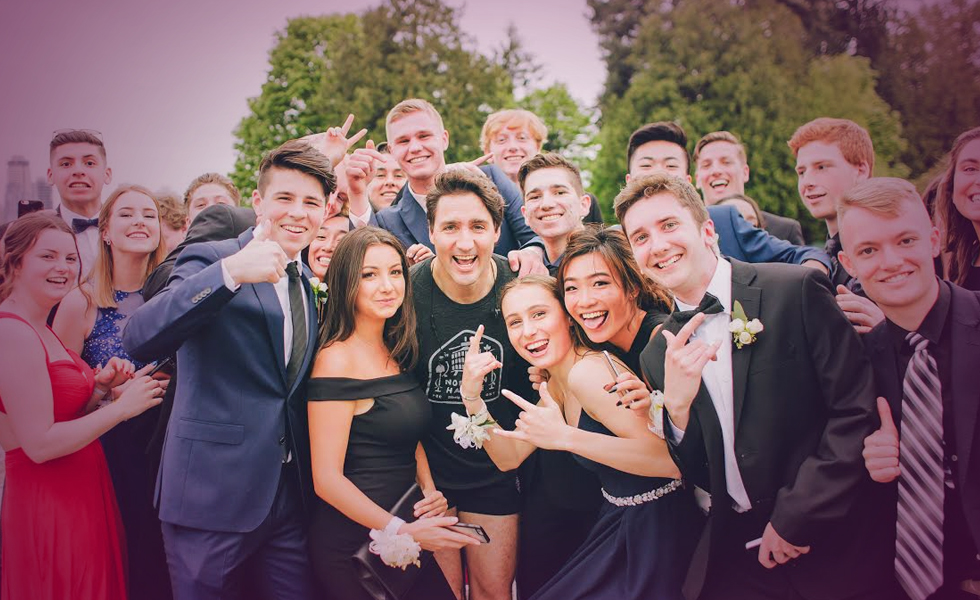 Justin Trudeau Photobombs A Prom Picture, Which Makes Him King

Trudeau’s photographer, Adam Scotti, chronicles the prime minister’s runs and catches the unsuspecting passerby reactions. Prom nights often include awkward moments with your date and partying. But a chance meeting with your country’s leader while he’s exercising? Now, that’s a new one! Canadian Prime Minister Justin Trudeau seemed to jog mostly unnoticed by a group of prom revelers in Vancouver, British Columbia. His photographer captured the moment and wrote in an Instagram post as he is chronicling the PM’s runs in a small side project. Though it looked like the prime minister was pulling off a photobomb, the students actually begged Trudeau to join their photo shoot. “We were just taking photos and hanging around talking, and then Trudeau just comes running,” said a female student. “At first, we were like, ‘Why is the prime minister of Canada running the seawall?’ And then we started yelling for Trudeau to get in the photo,” she added.

The charismatic leader obliged the students with a group photo, and his official photographer, Adam Scotti, tweeted a picture of the moment, captioning it:

“I run. Tommy runs. The boss runs. This is part of a little side project to document the places we go and the runs we go on. Sometimes it’s just scenic shots, other times, it’s running past an unsuspecting grad group – half clued in, others were more distracted by the ginger with the camera. A memorable moment for all. I always love to watch people’s faces as they realize who just ran past, often several paces after he has passed.”

This isn’t the first time Trudeau has been captured in the background of a photo. In addition to the head of Canada’s government’s “impeccable timing,” the photographer also pointed to his “full Tofino spirit.” Back in August 2016 he was snapped with surfboard in hand and wetsuit worn down around his waist on holiday in Tofino, British Colombia, standing by as a bride-to-be prepared for her beach wedding. The same month, a Canadian family stumbled on him emerging from a cave while hiking in Quebec’s Gatineau Park. The off-duty prime minister has been spotted vacationing from Quebec to B.C. over the past two weeks with an official stop in Vancouver’s pride parade. Sightings of him with his family set off waves of “Trudeaumania” as well as grumblings by some online that he should get back to work on issues like the economy. The winsome world leader definitely has a knack for showing up in unexpected pictures, frequently shirtless and definitely easy on the eyes, wouldn’t you say ladies! Lol!

I Believe Trudeau Really Enjoys People And Doing What He Loves While Running!

Trudeau is extremely charismatic and knows how to work the crowd and I feel he has an off-beat sense of humor about how people react to him being Prime Minister.

Four of Wands: Inverted (Upside Down)
This card is change of residence and optimism. Since inverted, I feel that Trudeau is still relishing in the win of the office.

Six of Cups:
This card is forgiveness of the past and nostalgia for better times. I believe this is what Trudeau is hoping his term of office will do for his country.

Five of Pentacles:
This card is low self-esteem, health concerns and sometimes poverty mentality. I feel this card was drawn to represent all the issues Trudeau is addressing for his country as his role of Prime Minister and hoping to make better.