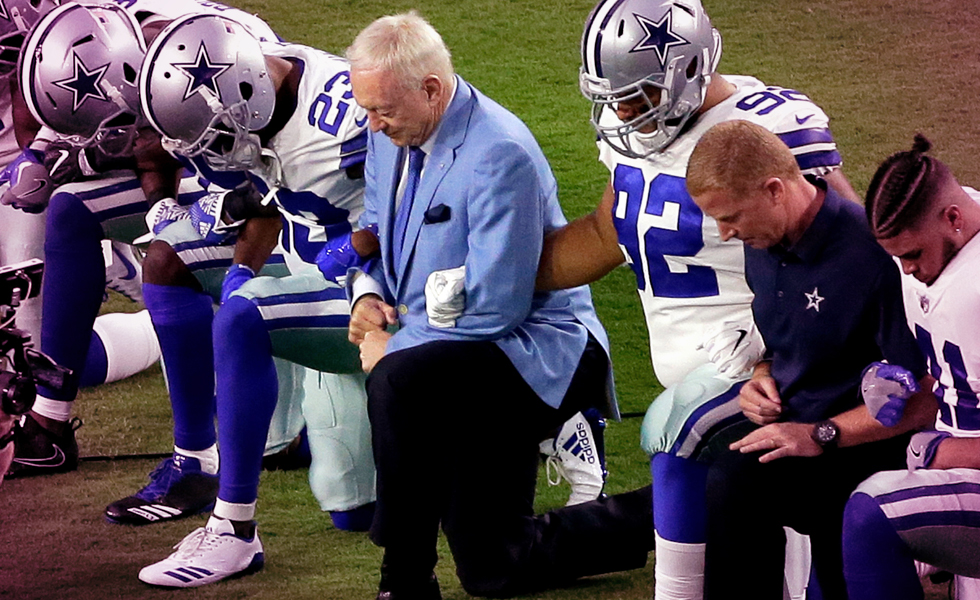 While the US President is busy with his proverbial war against North Korea, there might be another one coming. One which he brought upon himself, nonetheless. Well, if we are honest, he has been in war with his own people since before he took charge.

Trump brought his usual style, calling NFL players who kneel down during the National Anthem ‘son of a bitch’. He said it’s disrespectful towards the country, the American flag, and to the people. Some agreed with him, cheering loudly, while others decided it’s time to protest. Shouldn’t he be concentrating on more pressing matters instead?
The NFL players kneeled down in unison during their last game, to show Trump that he was racist and wrong. Of course, Trump’s criticism wasn’t only about their kneeling habits, but their playing style, too. It was a double blow to the players.

Many agreed with him, cheering loudly at his words. Yes, we know by now that he does give a great speech. But then there were others who were outraged by his newest remarks. The NFL players found a ‘powerful’ ally, too, in Rep. Sheila Jackson Lee (D-TX), who kneeled down, too. And what’s even more thought-provoking is that she did it on the House floor.
“I kneel in honor of them. I kneel in front of the flag and on this floor, I kneel in honor of the First Amendment. I kneel because the flag is a symbol for freedom. I kneel because I’m going to stand against racism. I kneel because I will stand with those young men and I’ll stand with our soldiers. And I’ll stand with America, because I kneel.”
Let’s ask the cards whether these off-hand remarks will have a permanent mark. Both on Trump, the people and the NFL players. They surely won’t be forgotten easily.

Eight of Swords for The NFL players: They are hurt, angry and disappointed. They feel like they are left out, being the latest victims of Trump’s wicked tongue. Although many people feel for them, they still feel isolated and that they are on their own in this. Time will heal these wounds though.

The Empress for the citizens of the US: Things being as chaotic as they were, this wasn’t exactly what people needed. However, most people will just put it down as another one of those big and controversial talks of Trump. Again, the nation is divided when it comes to their opinion about this.

Ten of Pentacles for Trump: Once more, Trump’s conservative side is shining. For him, this wasn’t about emotions, but pure business. Well, maybe lightening up a bit won’t hurt.

NFL
Previous ArticleGood Lord, It Must Be In Their Water! Khloe Kardashian Is Also Pregnant!Next ArticleMermaid School Is A Real Thing And They Take It Very Seriously