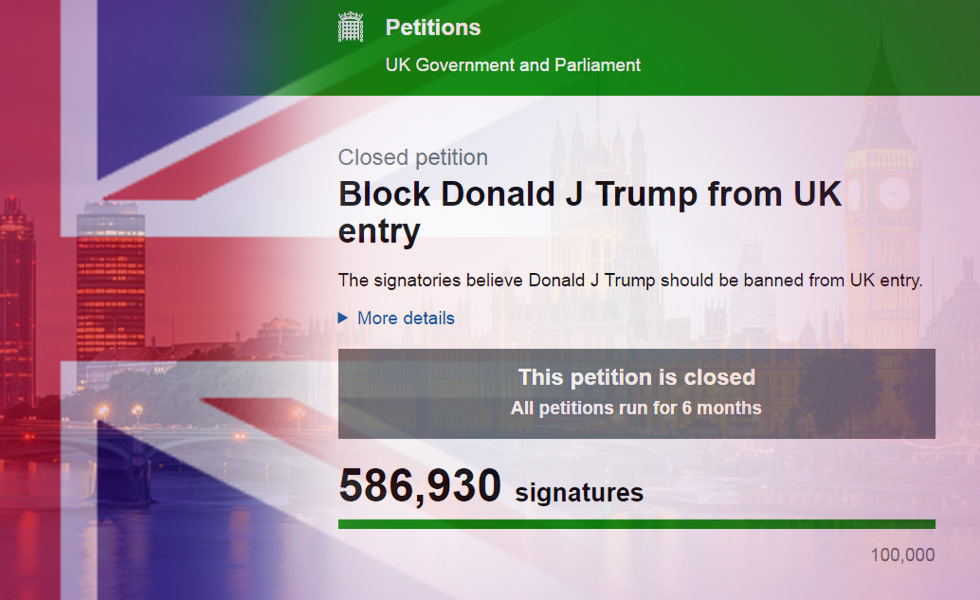 British Prime Minister Theresa May has made a determined effort to welcome Donald Trump to the UK and hopefully put British-American relations on a firm footing. The hand-holding odd couple have been working on their political relationship and by all accounts they have chemistry! According to former British Ambassador to Washington, Christopher Meyer, personal chemistry is essential, even in political relationships.

Not everyone agrees though. The British public have been busy winning more than a million signatures for a petition to keep Mr Trump out of the UK.

Chemistry aside, Ms May may need Trump more than Mr Trump needs May, everyone has witnessed eager-beaver Theresa, desperate to do a deal plying the president with platitudes. She’s even gifted the proud ‘Scot’ a quaich, which is a two-handled Scottish drinking cup for whisky, it symbolizes trust between the giver and the receiver. I’m sure teetotaler Mr Trump appreciates the gesture. Ms May seems to have no issue with Mr Trump’s sexist remarks and has said that some of his comments are unacceptable, but he has apologize for some of them. Oh, that’s ok then!

Ms May has set out her stall to ‘the Donald,’ her statement being that she is a woman who is also a Prime Minister. Some believe that her desire to meet is a sign of weakness. Jeremy Shapiro, director of research for the European Council on Foreign Relations, has warned that Ms May may come unstuck. Mr Trump has a reputation for being nice to someone’s face and within days sending out a mean spirited tweet. The bounder!

In his defence (not that he needs one), Mr. Trump made clear his feelings for Britain and for Brexit by returning a bust of Winston Churchill to the Oval Office. It was during Mr Obama’s time as president that the Churchill bust was replaced by one of Martin Luther King Jr. Ms May returned Mr Trump’s compliment by sending him a copy of the 1941 Christmas eve speech that Winston Churchill gave to the American people after Japan’s attack on Pearl Harbor and involving the US into WWII.

Ms May has her agenda, but is she right to offer a warm welcome to Mr Trump, or should she be listening to her country’s citizens? Let’s see what the cards say.

The Two of Hearts
This shows the President and the Prime Minister are on the same page. This card says that Libran Ms May and Gemini Donald have chemistry. The focus of this card is on relationships and the most important relationship to the respective leaders is the one that they have with their country. I feel that Ms May truly believes she is doing the right thing for her citizens and it would be foolish not to make an ally with a superpower.

The Tower
This represents the UK and its citizens. There is a resistance within this card. A million signature’s for a petition is a serious statement. Change is an inevitable part of life for the UK. Ms May will continue to be at odds with her country for a while longer. Ms May did not agree with the majority of people voted to leave the EU and the country will solider on working with what it has and what it knows.

The Four of Wands
This represents stability and completion. Theresa May has made the best decision under the current conditions. Her efforts will create a stronger foundation for the UK.

Theresa May has made an unpopular decision in welcoming Donald Trump the UK. The citizens and even the Royal family have expressed concerns, but Ms May is nobody’s fool and she is not to be underestimated. The decisions made now are clearly considered and as with her Libran predecessor Margaret Thatcher, this lady may have developed a cast-iron backbone. Watch this space!

The Number One Reason For Relationship Failure