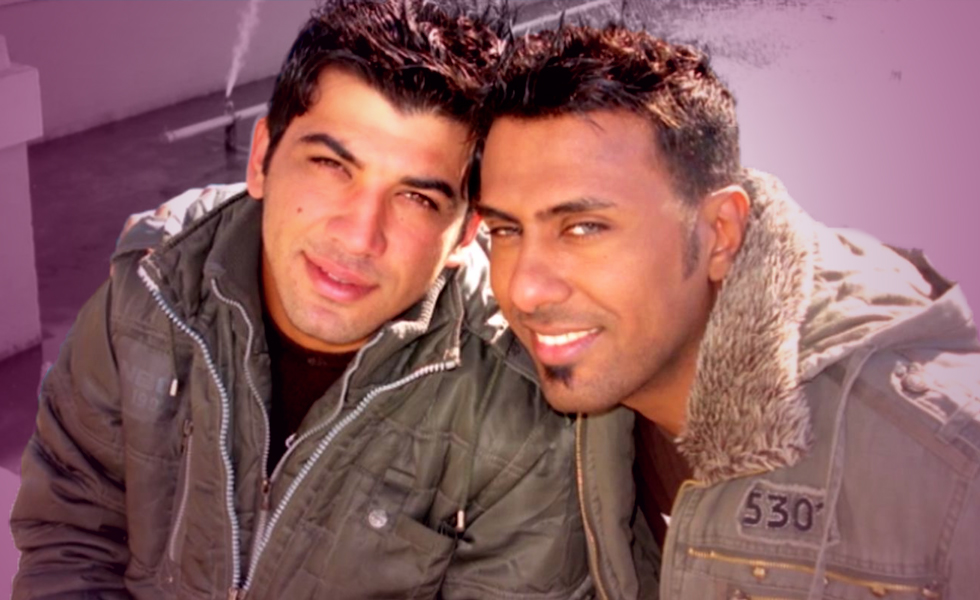 Some people spend a lifetime looking for love, or rather their idealized concept of how life would be if only they could meet ‘the one’.

We don’t find love, it finds us and sometimes in the most unlikely of places.

We don’t find love, it finds us and sometimes in the most unlikely of places.

Nayyef Hrebid studied hard, got his degree (in Fine Arts) but was unable to find work. After applying for a job as a translator for the US army,he ended up by 2003 in a place called Ramadi, a warzone in Iraq. Little did he know that he was soon to meet the person he would spend the rest of his life with. Nayyef was to encounter that jaw dropping bolt of lightening, love at first sight moment. What he did not realize at the time was that the object of his affections, Btoo Allami was attracted to him also. They became involved in various military missions until one day Hrebid felt comfortable enough to say ‘I love you!’ The feeling was evidently mutual. Although being gay is not illegal in Iraq, the couple knew that not everyone would approve and so tried to keep their relationship private. Some colleagues were supportive, but not everyone one was and Hrebid was violently attacked ending up in hospital.

Fast forward to 2009, Hrebid applied for asylum in America, which was granted and so he set up home in Seattle. He tried, unsuccessfully to get a visa for Allami. Allami secured an interview with the Canadian Embassy in Lebanon and flew to Vancouver in September 2013. The couple married in Canada the following year on Valentine’s Day and Hrebid applied for a US visa for Allami as his husband.

The visa was approved!

They have since had another wedding ceremony in the US and married again in Washington State. The couple are now living happily ever after in Seattle.

‘Out of Iraq’ is their story. Let’s leave the last word to Allami ‘I’m living the dream. I’m free’.

We don’t need to pack up to the nearest war zone in order to find true love. Regardless of sexual orientation, the boys inspirational story gives hope to the unlucky in love. Is it really happy every after? Let’s see what the cards say.

The boys drew the Eight of Wands, the Devil and the Ten of Hearts.

The Eight of Wands:
This is passionate, fiery and dynamic and describes the relationship between Nayyef and Btoo. They knew in their hearts that they had to initiate a relationship irrespective of the risks or outcome. This paid off.

The Devil:
This represents the worst side of human nature and the reasons why they felt the need to keep the relationship private. Nayyef and Btoo revealed that their respective families wished for them to marry and have wives. The boys had to live their truth, and live their truth they did.

The Ten of Hearts:
This is the happy ever after. This card says that they have attained personal success and domestic happiness. Personal reputation is not an issue here and there is a feeling of respect and honor gained through correct action.

Some people might say that this story is unusual due to the circumstances in which they met and the nurturing of a same-sex relationship. The karmic lessons have been learned and the twin-flame connection has developed into the final stage. The hard work is over.