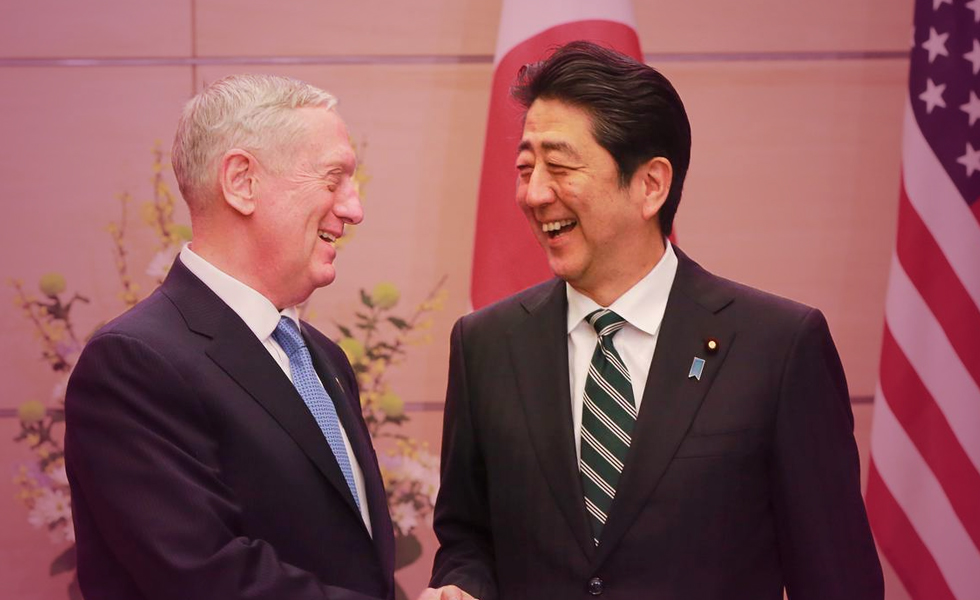 The Trump administration has been in overdrive emphasizing its commitment to the security of Japan and South Korea. US Defense Secretary Jim ‘ Mad Dog ’ Mattis has offered assurances to Shinzo Abe, Japan’s Prime Minister specifically around Article 5 of the mutual defense treaty. In case you were wondering, Article 5 commits the US to help defend territory that Japan administers should it be attacked. Mr Mattis has said that Article 5 is as real today as it was a year ago, five years ago, and will be 10 years from now.

Well, according to Mr Mattis, within the past week, North Korea has behaved in a threatening and destabilizing manner and as such, defensive steps have been taken, like deploying the Thaad antimissile unit. Although we don’t know precisely when the unit will be deployed, US and South Korean officials say it will be before the end of the year. Last week, Mr. Mattis paid a visit to South Korea, in a bid to reassure officials that the American commitment to defend their country (in the face of North Korea’s accelerating nuclear threat) had not changed. Both sides confirmed that they would continue to work with plans developed under former President Obama’s administration and deploy an antimissile system to counter North Korea’s medium-range missiles.

Mr Trump’s comments last year about the ‘one-sided defense treaty’ probably didn’t help, but in Mr Trump’s defense, he wasn’t actually president at the time of commenting. However, Mr Trump’s approach to diplomacy evidently, gives other countries the heebeejeebees, hence Mr Mattis’ hand holding. At Mr Abe’s request, Japan was the first visit on Mad Dog’s list as defense secretary. Mr. Mattis pointed out that he had served on the Japanese island of Okinawa as a young Marine.

Let’s leave the last word to Mr Mattis ‘I want there to be no misunderstanding during the transition in Washington that we stand firmly, 100 percent, shoulder to shoulder with the Japanese people.’

Let’s look at some cards for Mr Mattis. We have the Eight of Pentacles, the Seven of Pentacles and the World.

The Eight of Pentacles
This represents growth. Mr Mattis has been described as the General’s General and role as secretary of defense allows the opportunity to build positive relations globally, this what he will continue to do.

The Seven of Pentacles
This asks for patience. Lessons will continue to be learned from past successes and failures. Offering reassurances to allies might seem tedious but it is an essential step in promoting world peace.

The World
This represents the US with the whole world in its hands. Hard work has been demanded and resulted in a sense of unity and balance. Material rewards and inner peace are promised within this card.

Mr Trump has told the world that he wants the US military to be so big and powerful that there would not be a need to use it. Collectively the cards say that the US will continue to develop its defense in order to keep the peace. However, under threatening circumstances there would be no hesitation in using his military.