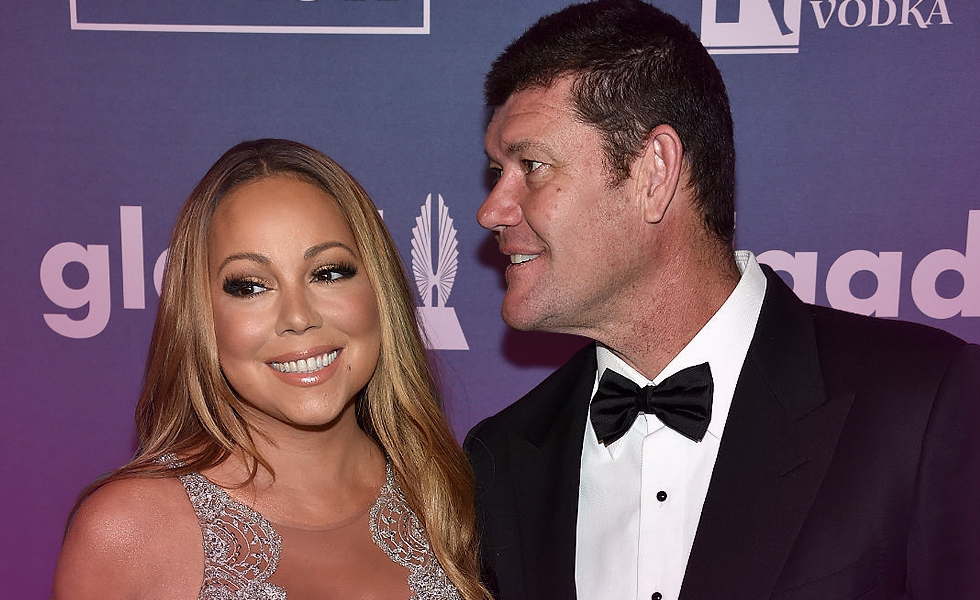 Mariah Carey has been enjoying leisure time with friends at celebrity hotspot ‘Nobu’ amid rumours that she’s had a falling out with billionaire fiancé James Packer. Whatever the truth is behind the rumours it didn’t appear to stop her having a good time with her entourage as she remained in good spirits. The talented songstress stood out for many reasons as she flashed her $10million 35 carat diamond engagement ring whilst wearing red leather trousers. Not one for the demure look and certainly not the sign of someone who has recently separated from the (new) love of her life.
There are several rumours doing the rounds following the alleged split, from Mariah’s extravagant spending to Packer’s jealousy around one of her backing singers. The jealous billionaire fiancé has reportedly gone out of his way to remove backing dancer Bryan Tanaka from various locations frequented by Mariah. Mr Packer expressed his dissatisfaction about Mariah’s new reality show of which he had reserved judgement. Has the tension become too great? Evidently if they have separated it is not something that has happened overnight.

Whatever the truth is, one of Mariah’s people have said that although a fight did take place between the couple it was not due to excessive spending or infidelity but it was reported that Mr Packer did something ‘really bad’ that involved an assistant of Mariah as well as other allegations.’ Bad enough for Mariah to walk away from potential husband number three? She’s still wearing the ring and so there’s still hope.
Mariah had a three year marriage with music executive Tommy Mottola and a seven year marriage with Nick Cannon with whom she has four year old twins.
Taking a break, or something more permanent?

Mariah drew the Three of Pentacles, the Devil and the Ace of Swords.

The Three of Pentacles shows that three’s a crowd. Mariah has not been involved with Mr Packer for very long and there are certain aspects of his personality that she has not seen. A $10billion engagement ring is the ultimate gift from a future husband, but there should also be emotional harmony in the relationship.

The Devil represents superficiality and also over-indulgence. The issue of trust should not be an issue, but it is.

The Ace of Swords reveals the power to choose. Has someone made a clean break?
The cards do not bode well for this relationship. Once the toothpaste is out of the tube you can’t put it back. It would be a real shame if this couple did not work things out, but whatever they decide, I do not doubt that Mariah will keep the ring. They are wished all the best in their decision.

11 Qualities to Look for in a Psychic