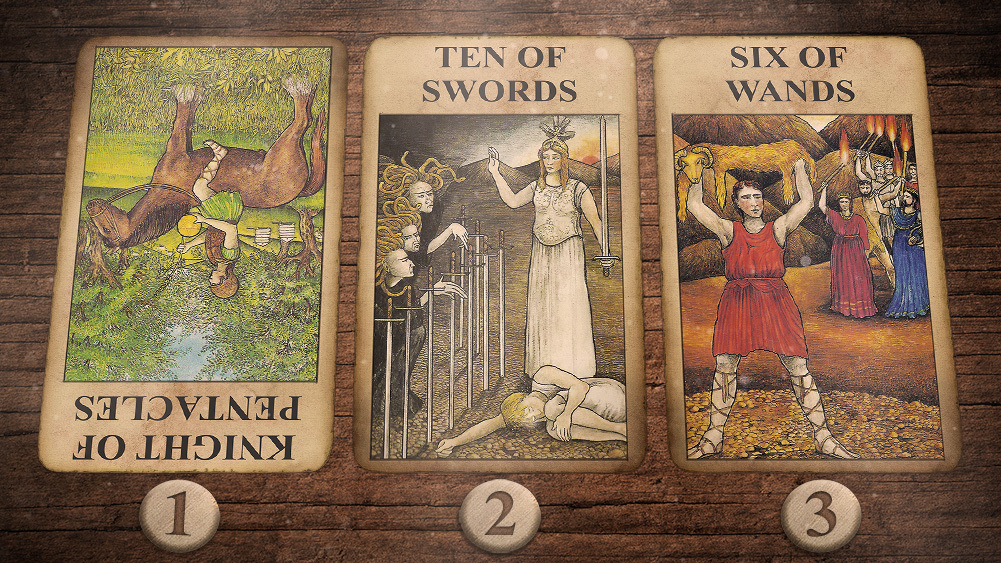 The image on the Knight of Pentacles often evokes thoughts of success as we see a relatively young figure holding a large coin (pentacle) astride a gorgeous and regal steed. When this card comes up reversed for you as it did today, it indicates the very opposite. If you find yourself seeking answers about the character and possibilities of a potential new love interest and you get this card reversed in your daily draw, it is a warning to run, quickly, far away. Reversed, this card speaks of a person who is generally quite lazy and always taking full credit for the hard work and efforts of others. It can signify one who is given to extreme gambling and always looking to make a quick and easy dollar, usually at the expense of someone else. For a potential love interest, it indicates one of whom you will have to always take care financially and in every other way such as around the home as this person will not lift a finger to cook or wash a single dirty dish or article of clothing. If you are not seeking answers about a potential new love or other individual in your life such as your own child or a deadbeat parent and the Knight of Pentacles turns up reversed for you, it is as though it is holding up a mirror to your own behavior. How have you been acting in your professional life? How do you treat others, especially those who could potentially benefit you in some way? This card urges you to step it up and work hard, making an honest living through honest means and not at the expense of anyone else in any way be it through robbing, cheating or simply taking credit when it is not due you. Work hard. Make your own money. Take care of your own obligations.

On the face of the Six of Wands is a victorious hunter holding his kill proudly above his head with the villagers celebrating behind him. This Is an amazing card to get in a daily draw as everything about it screams great things. Among the fantastic indications of the Six of Wands are overly supportive people, your own personal cheerleader(s) as you work toward a goal or make a presentation as well as fans and well-wishers. When this card turns up for you in the upright position, it heralds victory is at hand, triumphant success, high achievements, winning and having the upper hand. It can also indicate you taking on the role of a leader, finding yourself in the spotlight, fame, celebrity, much confidence and self-esteem. If you have been dealing with struggles such as trying to get your own business up and running, attaining a higher position in your career or seeking fame, the Six of Wands will fall for you to let you know success, praise and acclaim are on the horizon. It also signifies praise, acclaim, awards, recognition, applause and goodwill. Lastly, this card speaks of strength, stability and victory in battle. Hold your head up high, be proud and go forward with confidence.

Where Do You Get Your Worthiness From?