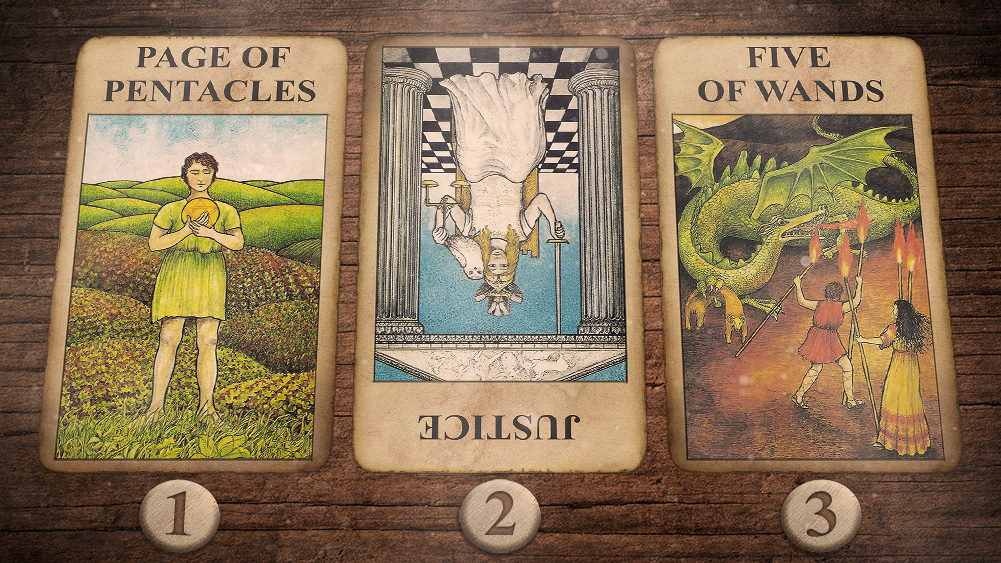 On the Page of Pentacles, we see a young man clutching a pentacle to his chest with his eyes closed as if in contemplation. He may be contemplating how far he has come as is evident by the many hills behind him which are indicative of struggle and overcoming obstacles. Our young man may also be contemplating where to go from here or how much further he has to go to reach his goal. This will all be determined by what is going on in your life, specifically. When the Page of Pentacles comes up for you in a daily draw, it indicates good news is on its way to you pertaining to any number of things such as business, property, work/career, schooling or money. It can also suggest good results regarding your physical well-being. This card may also turn up for you indicating the need to plan ahead as well as urging you to fully lay out your plans before embarking upon a new, large venture such as starting your own business, building a home or making any significant change of any kind. Form a solid plan then wholeheartedly jump in with both feet. With a well thought out plan as well as focused and determined efforts, anything is possible.

The image depicted on the face of the Five of Wands is pretty scary. After all, who could stand victorious against a giant dragon other than Donkey in “Shrek”? When this card falls upright for you in your daily draw, it is screaming of fights, disagreements, conflict and opposition of all types. It speaks of losing your temper, acting in an aggressive manner or indulging in overly aggressive thoughts as well as being surrounded by opposition and dealing with constant struggle. If in any kind of negotiations, expect others to be uncooperative and not open to seeing things any differently than they currently do. Beware of a growing restlessness, irritation, aggression and frustration. You may soon find yourself in an ego battle. It is quite possible you have been acting petty and underhanded or are losing control of a situation. Things are getting out of hand and you may be entering into a rather chaotic situation. The Five of Wands may turn up in your daily draw to bring your attention to you possibly acting overly defensive or extremely demanding. This card also often turns up as an indicator of general competition and sporting events. If you get this card in a daily draw, you are urged to try and remove yourself from any negative situations and do a full reassessment. Is the person with whom you are dealing acting unruly, or are you? Make adjustments as needed to restore the peace.