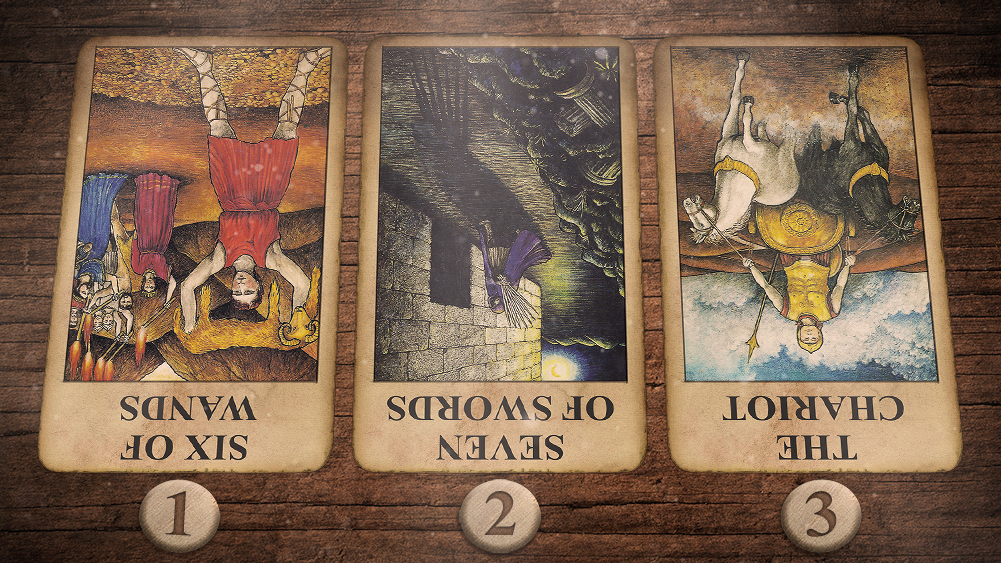 When preparing these daily tarot draws, I really do shuffle the deck, cut it and draw/lay out the cards just as I would any other legit tarot reading. To me, this is a legit tarot reading and I have heard from some people how these daily draws can benefit them as they go about their day being a bit more aware of different things going on around them or even within them. Occasionally, all three cards will turn up in the reversed position. It happened last Thursday, and it happened again today. Those of you who are new to tarot may see all reversed cards as a bad thing; however, that is far from the case. There are some cards that are actually much better when falling in the reversed position. Never fear the tarot, even when it all looks quite dark and negative on the surface. There is a message in your card and sometimes you have to weed through the ugly stuff to get to the lesson or warning.

For those with a healthy knowledge about the tarot, seeing the Six of Wands turn up reversed in a reading may cause some distress or at the very least, great disappointment. Among the potential aspects indicated by this card are a lack of achievement, not receiving well-deserved recognition or not having the support or confidence to see a job, project or some other significant situation through to the end. It represents loss and failure; that you may be fighting a losing battle or beating a dead horse. The Six of Wands, reversed, signifies disadvantage, disgrace, disloyalty, treachery and broken promises. This card may come up for you indicating someone is holding ill will toward you or that you are carrying misdirected ill will toward another. It is possible you have been acting in an egotistical or arrogant manner and have become willing to do anything for your chance in the spotlight. Stop acting like such a diva and always keep in mind that pride cometh before a fall. Alternatively, this card can represent mob mentality or you following someone blindly. Lastly, if you have been feeling someone is out to get you and the Six of Wands falls in the reverse position for your daily draw, you may well be right.

If you have been acting in a reckless manner or taking risky chances, the Seven of Swords will come up reversed for you as a warning that you need to take heed as you will very soon be caught and what you thought were your best laid plans are about to blow up in your face. This card may fall in a daily draw for you to be cautious as you may find yourself dealing with serial cheaters, pathological liars or two-faced persons as well as toxic people or any others who may mean you harm in some way. This could also be representative of your own recent actions. If you have not been acting in accordance of the greatest good for others, it is high time to make some much-needed changes. The reversed Seven of Swords could turn up in your daily draw to serve as your own conscience and hold up a mirror to your recent actions and/or motives. Maybe you have been taking credit of the hard work and achievements of others or acting in a cowardly fashion as well as trying desperately to avoid the consequences of your own bad behaviors. If you have been acting in negative or devious ways, it is time to step up and take ownership of your actions and make the much-needed changes to rectify the situation as well as greatly improve your own actions and motives. If you do not, the reversed Seven of Swords will turn up for you as a warning that the consequences resulting from you taking ownership would be far less than for someone to call you out on it which will very soon be happening. Lastly, this card serves as a warning that someone is trying to con you or take advantage of you in some way or another unscrupulous person will soon attempt to blackmail you. If you get this card, it’s time to check yourself.