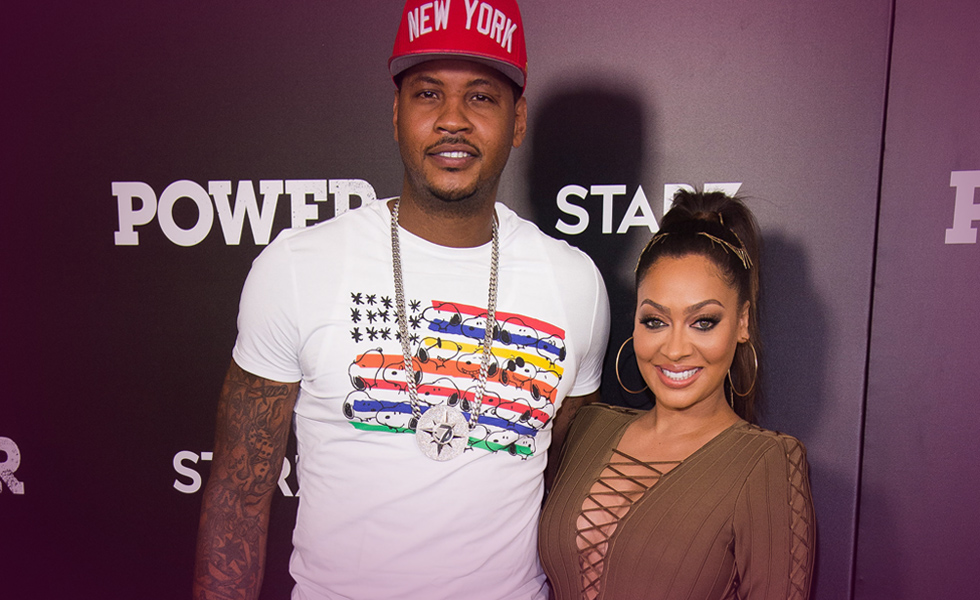 Carmelo Anthony 32, and former MTV-VJ La La Anthony 37 have reportedly separated and a divorce filing seems imminent. La La moved out of the family home a few weeks ago and is currently living in her own place in New York City. Apparently, the issue is a woman who Carmelo has been seeing and now claims she’s pregnant with his baby and as you can imagine, his wife, La La is pissed, TMZ Sports reported. The “other woman” is supposedly to be six and a half months pregnant with Melo’s child has made it clear to him that she expects him to kick in for medical expenses and other baby-related costs. Initially, it was reported he had gotten an exotic dancer pregnant causing pals to stick up for the woman online. “Mia Angel Burks is not a stripper,” a source said. “She lives a regular life.” Last week, one of Carmelo’s former friends told a Chicago radio station that Melo and Burks fell for each other at a local nightclub: “Mia met Carmelo at Room Seven, a club in Chicago when he was here for the NBA draft doing press. She’s not a stripper, she works in an education setting up programs. La La and Carmelo have been fighting for about a year. The marriage has always been a rocky one, so this is no surprise.”

So far, neither side has filed divorce papers but we’re told there’s virtually zero chance of a reconciliation. La La is making a big statement in NYC going out without her wedding ring since she moved out from the home she shared with the NBA star. Carmelo according to gossip reports is desperate to win La La back amid the cheating scandal. The Knicks star has been texting La La nonstop, even asking her on dates and vacations. On top of that, Carmelo has been “liking” almost all of La La’s social media posts, making his efforts very public. One source shared that he “still loves his wife,” and is hoping their breakup is temporary, much like their splits in the past. If it goes to divorce, it will be a messy one as a pre-nup is in place but can be challenged if one party cheats and unfortunately Carmelo Anthony has the reputation as a serial cheater. The two married in July 2010 but had been engaged since Christmas Day 2004 and have one child together, 10-year-old Kiyan.

Is There Any Chance for A Long-Term Reconciliation for Carmelo and La La?

Not any! Troubles in this relationship from the start. I do believe Carmelo will try and woo La La back but bottom line is pride and humiliation.

Ace of Pentacles:
This card, of course, represents wealth. La La trying to decide if “affair” is worth giving up her status and lifestyle and Carmelo on how much he will lose if the pre-nup does not hold in court.

The Emperor: Inverted (Upside Down)
This card represents a man who is controlling, powerful and materialistic. I feel this card is Carmelo and as it is inverted, shows he is not quite getting his way in this situation.

Knight of Wands: Inverted
This card represents wanting freedom and being impatient. Since this card is inverted, I believe it shows Carmelo’s attitude towards his marriage. He loves his wife but also wants the freedom to do as he pleases. Obviously, La La is showing she is not game for that!