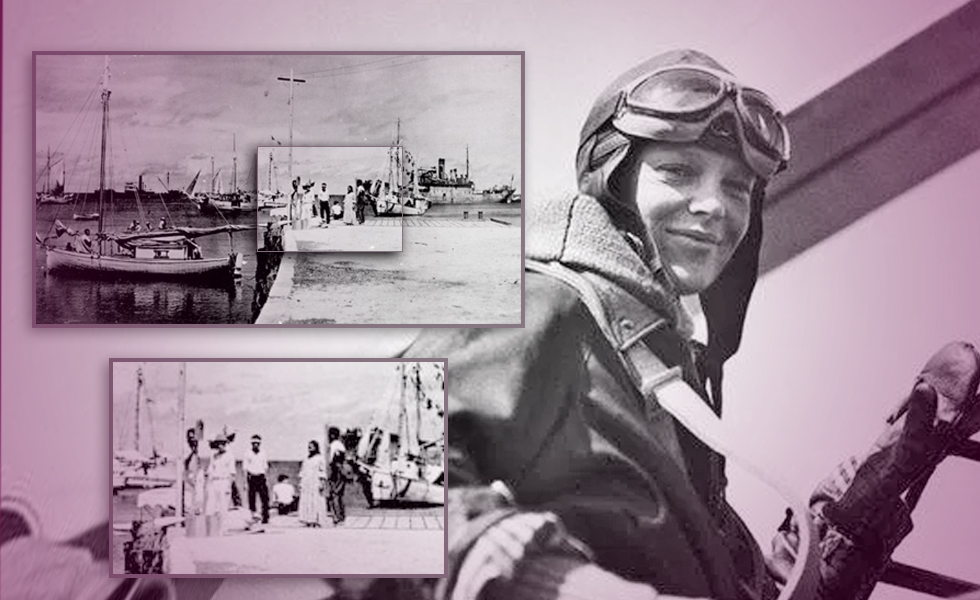 It has been 80 years since world-renowned pilot Amelia Earhart vanished while on her around-the-world flight, and a new photo might be the missing link in unraveling the mystery of her disappearance.
At the time of her disappearance, it was widely believed Earhart and navigator Fred Noonan crashed her plane in the South Pacific after running out of fuel. In a new documentary airing Sunday, July 9 on the History Channel, former FBI official Shawn Henry attempts to answer the questions surrounding the mystery of Earhart’s vanishing — and makes the claim that she could have survived a crash. On July 2, 1937, a then 39-year-old Earhart and Noonan were flying east from Papua New Guinea on the final leg of her global journey. In what is now believed to be her final radio communication, Earhart then expressed concern about her fuel levels, saying “Gas is running low.” “Have been unable to reach you by radio,” Earhart said. “We’re flying at 1,000 feet.” In the soon-to-air documentary, “Amelia Earhart: The Lost Evidence,” Henry points to a recently-discovered photograph believed to feature Earhart on a remote atoll in the South Pacific in offering the theory that Earhart landed her famed Lockheed Electra safely, but was then captured by the Japanese Military.

“This absolutely changes history.” “I think we proved beyond a reasonable doubt that she survived her flight and was held prisoner by the Japanese on the island of Saipan, where she eventually died.” Henry led an investigative team in examining a range of evidence as part of their research for the documentary and says the theory that the pair may have been held captive in Japan has been floated for decades, but the new photograph unearthed by retired U.S. Treasury Agent Les Kinney in 2012 and just now made public in the documentary aides in making that more plausible an occurrence. An old, cracked photograph found in the National Archives, showing a group of people on a dock in the Marshall Islands. Among the figures: two people who just might be Earhart and her navigator, Fred Noonan. The show’s experts say the short-haired person at the back is Earhart, and the man on the left with the receding hairline is Noonan. But the photo was taken from a distance, the man’s face is in shadow and the person purported to be Earhart is turned away from the camera.
“Kinney believes the plane on the barge is the Electra, and that two of the people on the dock are Earhart and Noonan. Kent Gibson, another forensic analyst who specializes in facial recognition, said it was ‘very likely’ the individuals in it are Earhart and Noonan. The experts interviewed think both were rescued and taken to Jaluit Island. Earhart and Noonan may then have been taken to a Japanese prison on the island of Saipan, according to the special. But if Earhart and Noonan are bound for prison, why do they look so serene in the photograph? “They obviously believe that they’ve been rescued,” Gary Tarpinian, the show’s executive producer, tells NPR. “However, the word came back from Tokyo that we can’t let her go. I’m not sure why. Did she see something she shouldn’t have seen? Did they think she was spying? Who knows? We can only speculate. But somewhere between when she thought she was rescued and after that photo, she was held captive and brought to Saipan.” The special interviewed people from Saipan, including a woman who says might be the last person alive who saw Earhart with her own eyes. “She was a 12-year-old girl who never forgot what she saw, because she had never seen Caucasian people, she’d never seen Westerners.” “And she remarked to her mother, ‘Do all the women in the West dress like men, with short hair and pants?’ The “nay sayers” are lining up!

This is one of those Bigfoot, Area 51 and Kennedy assassination adventure discussions. There are as many who say they can prove one theory over another but never with concrete evidence.

The World:
This is a card of ultimate success and happy conclusion. I believe that Shawn Henry hopes the new pictures and information found will prove without a doubt what happened to Earhart but it will always be either you believe or you don’t.

The Hierophant:
This is a card of teacher and healer. I feel this card represents Henry’s hope for closure of one of those historical mysteries.

Ace of Pentacles: Inverted (Upside Down)
This is a card of financial wealth and material possessions. Since pulled inverted, I believe the research came at a personal expense to Shawn Henry but he didn’t care, for whatever karmic reason, he wanted the riddle solved.