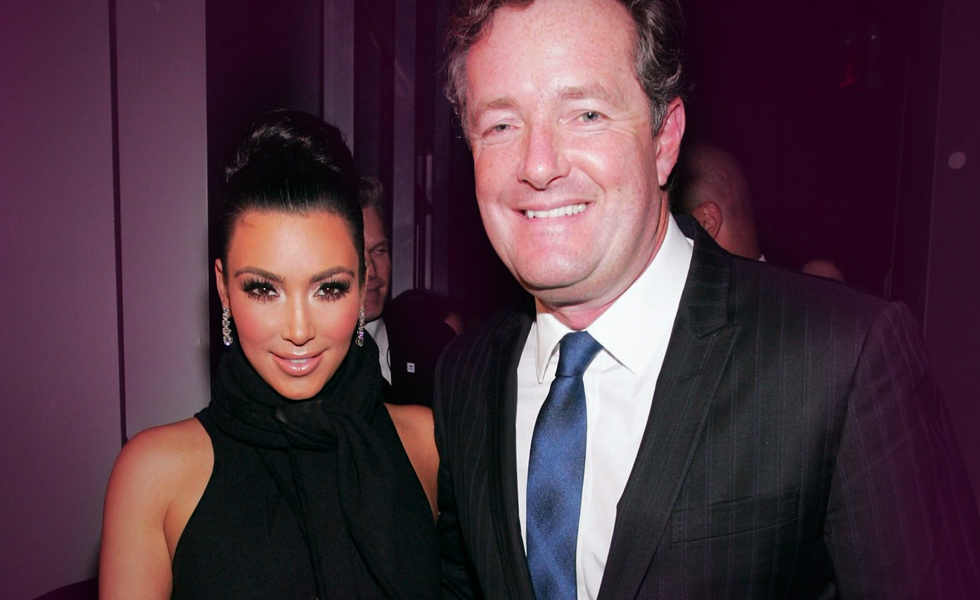 It only takes one look at the scorched Twitter accounts of Chloe Grace Moretz and Bette Midler to understand that Kim Kardashian is fully capable of defending herself against the haters. In fact, shutting down the BS is something of a sport for the famous family, whose every move seems to elicit daily controversial reactions. So, it’s no surprise that Piers Morgan of all people, is the next in line to try and take Kim Kardashian down.

After taking a swipe at the mother-of-two over unretouched bikini photos, the British TV personality is at it again with a new article in the Daily Mail about how he’s reached his limit with all things Kardashian.

Are there valid criticisms to be had about the “KarJenners” regarding what they promote and represent in our culture? Sure. But Morgan’s article titled “Kim has hit rock bottom and I no longer wish to keep up” takes it to the extreme by painting Kardashian as a cultural mastermind bent on corrupting our children and capitalizing off a traumatic experience for her own benefit. Morgan says he is officially “done” with her after her appearance on “The Ellen DeGeneres Show,” where she tearfully recounted her robbery in Paris last October. In the interview, Kardashian explained how her outlook on life and material things has changed post-Paris, as she’s taken time off to spend more time with her two children.

“Kim Kardashian wants us to think she’s turned over a new leaf, that she’s renounced her old materialistic ways. That as a mother of two young children, she has learned how to behave in a responsible fashion,” Morgan wrote. “But she hasn’t. The truth is that she’s now using her massive global platform to actively corrupt our kids.” Morgan’s biggest gripe against her is that she is simultaneously going public with her recent distaste for hyper-materialism, while promoting her new KIMOJI line that, yes, features some racy content, like an ashtray marketed as an “asstray” and drug-related emojis. “Kim Kardashian’s now selling nudity, drugs, booze and high-risk sex to the youth of the world and making hundreds of millions of dollars in the process,” Morgan continued. “Do we really want someone like her to be the role model our young daughters look up to and want to emulate?” He even knocks Kardashian for exploiting her children and “pretending to prioritize their safety and interests” as part of a money-making scheme. Morgan assumes that Kardashian is somehow unable to both be changed by an incredibly traumatic incident and continue to sell her products, be it emojis or video games to the public. Kardashian is after all, an incredibly successful businesswoman whose brand is about making money. To expect her to abandon all of her ventures is not only unrealistic, but unfair to a woman who’s worked hard to build an empire. “I want them gone from public life, expunged from the airwaves, thrown off the newsstands, and extinguished from the celebrity ether,” Morgan added. “They’ve become a pitiful parody of stinking, sobbing hypocrisy that should no longer be encouraged or tolerated in civilized society.” Gee Morgan, I am sure after that vitriolic attack, some people are thinking the same thing about you too. Lol!

What Is It That Bugs Piers Morgan So Much About Kim Kardashian? Piers Morgan obviously has a sexist attitude towards women making money off their sexuality which of course men do every day. Also, I feel a personal vendetta of being snubbed at one point by Kim in some fashion has made her a target by him.

The Tower:
This card shows being blind-sided in life and the rug being pulled out from under you. I feel this card supports my statement above that something personal happened in the way of being discounted or dismissed by Kim has him by the shorts.

The Emperor:
This card is a man who has to have complete control and rule of his kingdom. This could be a dual representation of Morgan and also may pertain to his dislike of Kanye, Kim’s husband who both fall under this card.

Princess of Pentacles: Inverted (Upside Down)
This card is youthful female energy with a very creative side and full of new plans and ideas. Being inverted, I feel this is what bothers Morgan the most is how proficient Kim is at marketing herself. He thought for sure she would have failed at something by now so you can bring that one down to just plain jealousy.