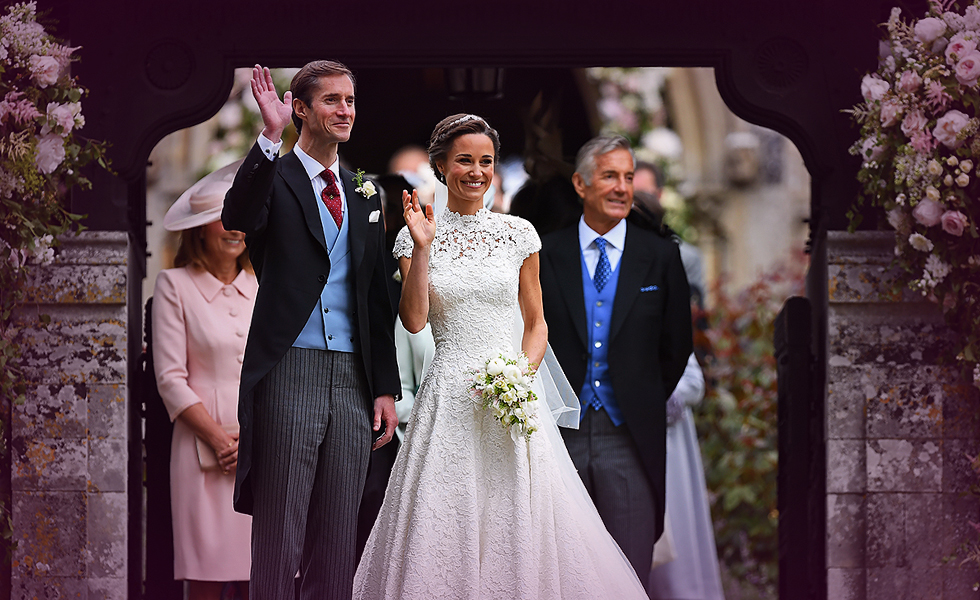 Pippa Middleton, 33, tied the knot with her hedge fund manager fiancée James Matthews, 41, in a breathtaking ceremony on Saturday. And as expected, every bit of Pippa’s big day was absolutely perfect.

All eyes were on the bride as she arrived at St. Mark’s Church in Berkshire wearing a custom Giles Deacon gown. The fitted lace gown had a similar silhouette as the bridesmaid’s dress in 2011 that made her a household name, showing off her toned figure. She reportedly has been spent numerous hour in the gym to get those toned arms! She kept her makeup simple, while adorning her updo with a dramatic veil. Pippa arrived in style to the church alongside her father, Michael Middleton, in a vintage car. The two enjoyed Pippa’s last moments together as a single woman, and Michael couldn’t look happier for his youngest daughter! After the ceremony, Pippa and James were photographed sharing a sweet kiss in front of the church in a picture-perfect moment that’ll definitely be making it on their wedding album.

Duchess Kate, also stunned in a blush-hued Alexander McQueen number with a matching fascinator. Though rumors swirled for months over Kate’s role in the wedding, it turns out she ended up right where she belongs as maid of honor! Years later, the roles have reversed as Princess Kate assisted her younger sister with her dress as she walked into the church. And while it may be Pippa’s big day, Prince George and Princess Charlotte managed to steal the spotlight from their aunt! The two tykes, who served as a pageboy and bridesmaid, were as cute as can be in matching outfits. It seems that Kate was also in charge of keeping the youngest members of the bridal party from causing any mischief. The kiddos were seen next to the mother-of-two at all times, and at one point she even gestured for them to be quiet. Meanwhile, Carol Middleton, Pippa and Kate’s mom, arrived in a soft pink ensemble and fascinator, while their older brother James looked dapper in a tuxedo. Paparazzi were able to catch a glimpse of some of the guests arriving with some pretty notable people in attendance. Pippa kept specific details of her wedding a secret, including her iron-clad guest list. She enforced a “no ring, no bring” rule, meaning you couldn’t bring your significant other unless you two were engaged or married. Princess Eugenie, Prince Harry and tennis pro Roger Federer were spotted entering church. Prince Harry was also seen taking a walk outside around the church’s grounds with his older brother Prince William, but his ladylove Meghan Markle was nowhere to be found at the wedding as was predicted. It was later confirmed she was attending the reception being held at the Middleton home. Another royal wedding on the horizon?

Are Pippa Middleton and James Matthews A Good Match?

Absolutely! I feel that both of them had many opportunities to choose a life-long partner but I pick up that neither one of them were in any hurry to head to the marriage alter. They both have strong personalities but kind demeanors.

Four of Cups:
This card is about feeling stuck in life, isolated and alone. These two are a perfect example of wondering whether they were ever going to find their true mate. Timing is everything!

Ten of Pentacles: Inverted (Upside Down)
This card is about financial security and family support. Since inverted, the vast difference in their personal financial holdings might have come up as a contention to work out. James Matthews is worth several billion and Pippa has a net worth of only somewhere around $289,000.

The Emperor:
This card is a man of power, money and control. This may be Matthews personality but since it was not inverted, I believe he does not allow it rule over his personal life. Pitbull at business but possibly a teddy bear at home? Lol!