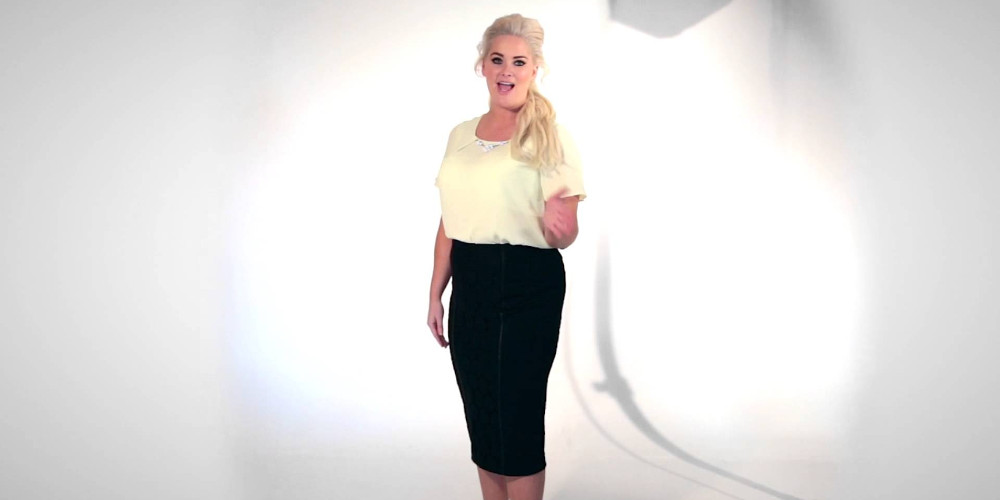 In Hollywood during the Grammy Awards, everyone wore black to show support and demanding that the dignity and honor of females in the business will be addressed. Besides the fashion business, Hollywood female actors are held up to being scrutinized by the business and social media for every pound gained or lost.

With every era, the female body admired has changed from desired voluptuousness to the rail thin era of 60’s Twiggy. That era stuck but slowly is being changed by those beautiful curvy women who are out there in front flaunting them for all to see.

I don’t believe I have ever read of or known a woman that has not been on some kind of diet at least once in their life, thinking they were overweight. Now we are not talking about weight that is dangerous to your health as in being obese but those muffin tops, side saddle thighs and blooming hips.

Well, it seems according to Whitney Thompson, the first plus size America’s Next Top Model winner 10 years ago, that she has seen some positive changes on how curvy women are being viewed and received.

Before Ashley Graham became a household name, before brands began capitalizing on the anti-Photoshop movement and before the conversation about including all body types in fashion had the stage it does today, Whitney Thompson made history as the first ever plus-size winner of America’s Next Top Model.

These days, Thompson’s life is a bit more farm-to-table than ready-to-wear. After deciding to take a step back from modeling in 2013, she and her husband moved to Tennessee, where they opened a fine dining restaurant

In the years since she won, the show, as well as the modeling industry at large, has made slow steps to embrace women of different shapes and sizes. Thompson is still the only plus-size winner of the competition, but she told HuffPost she credits Tyra Banks with the show’s growth and shift toward promoting a more positive body image.

“The show has absolutely evolved over the years,” she said. “I think that it grew with Tyra. It was her baby and you can see her wisdom and knowledge played a role in the evolution. When I won, Tyra cried. And I remember, this was maybe a year after her swimsuit photos surfaced and she was fat-shamed, thinking that my win personally affected her.”

Yet, Thompson said she has no regrets about being on the show, which led her not only to modeling gigs but also to become an advocate for the National Eating Disorder Association. She also found her voice, confidence and mission in life.

Thompson told HuffPost it’s the fan mail she receives that is her “biggest motivator.” Receiving those kinds of letters were both eye-opening and at times, challenging for Thompson and part of the reason she felt the need to step out of the spotlight.

“If words like that don’t force you to suck it up and power through whatever is going on in your life, I don’t know what will,” she said.

“Well, that girl in Spain said that she wore a bathing suit for the first time because of you, so put a smile on and finish the job.”

And while she called that kind of responsibility a “big weight on your shoulders,” she maintains “eternally grateful for the impact I could offer. If any of it impacted even one person’s life, then I am glad.”

Thompson said the term plus-size doesn’t bother her because she “grew up in an industry where that was the only term used for anyone over a size 2.” But she does have thoughts about the industry as it stands today.

“If we want a true body revolution, we have to stop emphasizing plus and start integrating all sizes, without gloating about it,” she said. “I’m not giving any designer or magazine brownie points for promoting heroin chic over the past several decades and then cashing in on a girl with hips. If anything, they should be begging us to forgive them for their crimes, not cashing in on our low self-esteem.”

The illusory body perfection of no hips, boobless and legs without thighs will always be for the select few who come by it naturally. Embrace your curves, keep them healthy with exercise and good eating and leave the stick thin girls for the catwalk. You can be guaranteed they have to go without a lot of meals to stay that way.

What Do Star Signs Say About What Kind of a Mother Someone Is?

How to Unlock Someone’s Psychic Ability