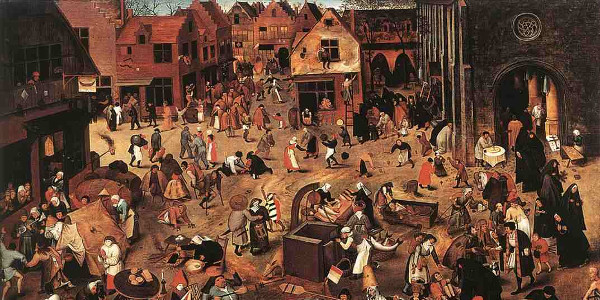 Doing some research on 100-year increments of social change, I ran across these hilarious but actually pretty frightening beliefs from the Dark Ages. I guess that is why they were called the Dark Ages. Be thankful you now live in a somewhat enlightened era of mankind, but of course 400 years from now, our descendants will look at us and think how ridiculous the things we believed as truth and how we treated illnesses.

The Dark Ages was the period between the end of the Roman Empire and the beginning of the Renaissance, between 400 to 1000AD. It was full of really ridiculously odd practices and beliefs. From deadly medical treatments to just ‘throw it out there’ improvised laws. Here are some historically recorded practices of that era. Some are hilarious but quite a few of them for the poor receivers of those archaic beliefs, not so good.

The scales of justice had no preference for man or beast, which meant that animals could stand trial for crimes. In 1266, a pig was tried, sentenced, and burned alive for murder.

Scientists of the Dark Ages classified animals a bit differently than we do today. For example, bees weren’t considered insects, but tiny birds and beavers were thought to be fish because they swam in water.

Owls were believed to be able to treat gout. You just had to catch one, kill it, pluck it, burn it, mix its remains with boar fat, and gout all gone!

Medical “experts” had no clue how to treat the plague and it showed by the sheer number of insane “cures” they proposed. One treatment involved rubbing chickens on the festering plague sores.

For those unlucky enough to catch what playwright Francis Beaumont dubbed “the burning pestle,” there weren’t a ton of treatment options. Some doctors recommended patients take a swig of highly toxic mercury. If you didn’t die from the disease, you died from the treatment. Gee, that sounds a lot like aggressive cancer treatment today?

6. Trepanning, or putting holes in heads

If you believed you had a head full of evil spirits, the doctors had the perfect cure: they’d just cut a little hole in your head with a tool called a trephine and release the demon blood.

As recently as the 1700s, men, women, and children lit up tobacco hoping for the awesome plague-defeating benefits to kick in.

As you could imagine, a plant with human-looking roots and hallucinogenic properties fueled all sorts of medieval nightmares. Some folks thought the plant killed anyone who harvested it. Others simply used it for black magic.

It was also believed that touching royalty could cure any affliction with just a touch from their fingertips. More than likely this was a rumor started by, well, royalty.

10. Belief in the existence of manticores

With a man’s head, a lion’s body and scorpion’s tail, this mythical chimera created by a Roman historian allegedly spent most of its time eating its prey whole, leaving no bones behind and shooting its spine like an arrow.

In the Dark Ages, people avoided them together, believing that demons lived inside them. Perfect excuse for the kids to tell Mom the next time she tries to make you eat them.

This was the belief that sperm carried homunculi, tiny versions of a fully-grown human. It had organs, eyes, a brain, everything a baby had when it was born. In the womb, this little mini me just grew from microscopic to baby-sized.

To determine whether or not someone was a witch, judges used the dunking stool. It lowered her into a river and if she sank, it proved she wasn’t a witch. Since they usually kept them under water longer than they could hold their breath, it was always fatal but they knew she wasn’t evil! Dead, but not evil.

These beliefs seem so farfetched to be the truth in our high tech scientific world we live in now but if you ask any Star Trek fan, they will point out to you in a minute that 50 years ago, what they were using on the science fiction TV series is now commonplace technology. Still haven’t done the “beam me up Scotty” yet but guaranteed that a few centuries out, it will probably be considered everyday stuff.