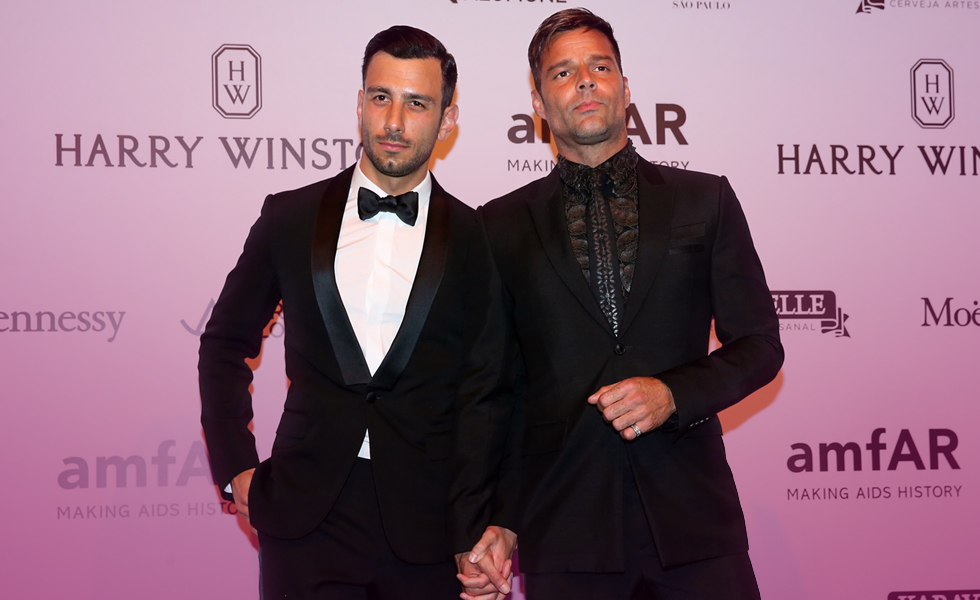 Ricky described how he fell in love with Josef’s ‘really original’ conceptual paintings, and after requesting a meeting with the Artist himself more than a year ago, they went on to find love. Although Ricky didn’t take the traditional route of ‘will you marry me?’ he did manage to propose with a nervous, ‘I’ve got something for you.’ It obviously did the trick since Joseph said yes!

Joseph is evidently excited to be stepfather to Ricky’s eight-year-old twin sons and they are all clearly delighted with the new family dynamics. Both guys continue to be busy with individual projects with Ricky announcing his world tour to begin in Monte Carlo Resort and Casino whilst Jwan’s latest exhibition ‘Maskings’ is currently being shown until December 3 at Stockholm Gallery Stene Projects.

Let’s leave the last word to Ricky’s handsome man, ‘Art can be a form of seduction, I find that my work is seductive in some ways; in the process of making it, in its apparent look, and in my subject matter. Art delivers an infinite variation of approaches that speak to different people differently.’

The couple drew the King of Hearts, the Three of Swords and the Two of Swords.

The King of Hearts is the guy who wears his heart on his sleeve. I feel that both Ricky and Joseph are similar in this respect, both creative individuals who pour every fiber of their being into their art. Although the couple were not together long term, they had built a form of a relationship that formed a base in which to build on.

The Three of Swords is the card of loss. This card represents that which much be given up in order to make room for something better. In this case, the loss of a past love.

The Two of Swords has quite a guarded energy. Although there is no clearly defined plan here, both Ricky and Joseph continue to follow their hearts and see where it leads. Both guys have a wish to compromise and a desire to find the one who helps balance the scales.

When the love is there in its truest form then any of life’s challenges can be addressed in the best and most positive manner. Ricky and Joseph are wished the best on the next stage of their life path.