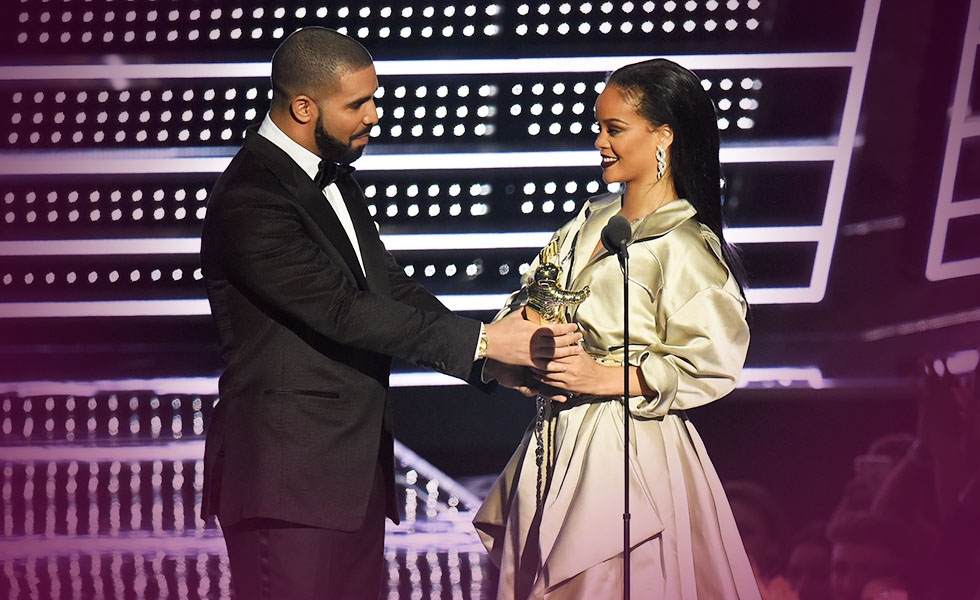 Rihanna and Drake have released their secret.

Rihanna has been living it up with the MTV VMA’S by turning it into her own mini-concert. This was followed by a wonderful speech from the rapper in honour of her award. Now at first glance, this could be just taken as someone who admires her work. But it appears to go much deeper than that. Afterwards, the two were stuck together like glue at the “Up & Down” nightclub. They then stepped out together again on Monday night for a cosy intimate night in the Nobu in NY. They were later seen slipping into a black SUV together and disappearing into the night.

Well, it has been rumoured in certain circles that they were a couple. So without standing on a pedestal over time square and shouting it out to the crowds. I reckon this is a much more tasteful way of saying to the world. Hey we are a couple! Love stories are just one of those things the public never get tired off. And the couple appear to be comfortable in each other’s company. Showbiz and celebrity status can bring untold pressures on even the best relationships. As every little argument is blown across the media for all to see. But it appears to be early in the day for this couple to have arguments. So for now, let’s enjoy the fact that they have good news to share with the world.

What do the cards say about Rihanna & Drake? Well, the High Priestess is indicating that this is very early stages. Emotions could be running very high and all is love and butterflies. But this is also a period of education and learning. The Pendulum of Love could swing both ways yet so let’s watch this space and see. The Two of Cups show a good match. Both are equally involved and in tune with each other, and this makes for a really good start to any relationship. The Queen of Cups sees this relationship with the potential for settling down for the long term. This is a mature card of the heart and offers a long lasting warmth about the union.

On an overview, as I said it’s early days. But both are under the strain of media and celebrity status. This has drawn a halt to many relationships over the years. Hopefully and I feel in my heart it won’t break this couple. Free will and circumstance will always have the last say. But from a psychic level, I have a good feeling about these two. I wish them both every happiness.

RihannaVMA's
Previous ArticleRenée Zellweger is back as ‘Bridget Jones’, but is she right to come back?Next ArticleHave Larry King and wife Shawn kissed and made up?