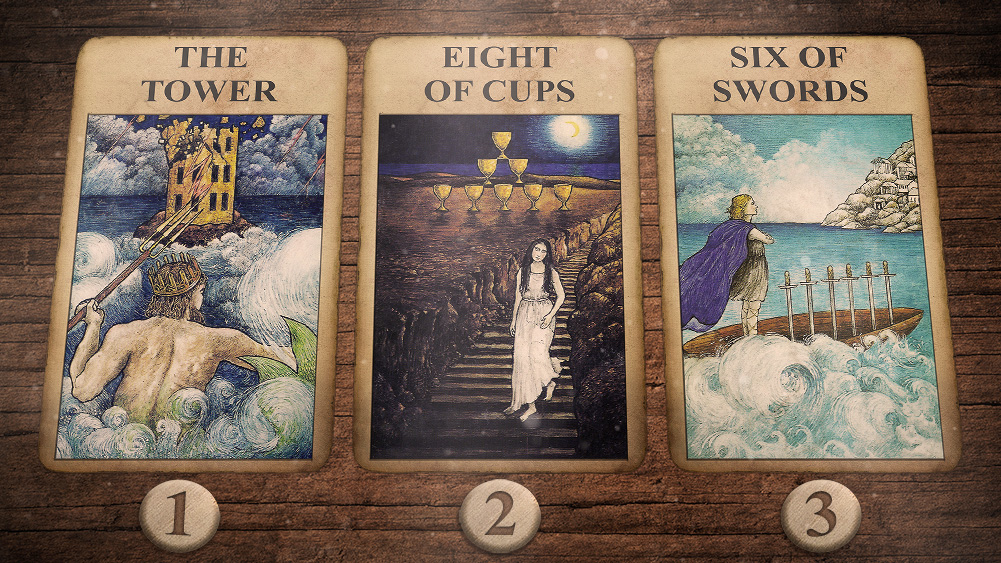 Of the 78 cards in a typical Tarot deck, many persons with a good familiarity of the Tarot consider The Tower the worst to get in a reading. Personally, I see it quite the opposite, but I will get to that in a bit. All-too-often, The Tower speaks of some tragic, deeply traumatic events. Among them could be the death of a loved one, domestic abuse, violent assault or rape. The Tower could signify extremely negative life events such as divorce, miscarriage or stillbirth. It can warn of child abuse, major car accident, sudden loss of a job, overdose. All of these are just to name a few of the very negative indicators behind The Tower. Quite often the chaotic and destructive events heralded by The Tower are sudden and unavoidable. This card may serve as a warning to take extra precautions regarding your safety and/or start acting in a much more responsible manner. If you are one to take chances, especially a gambler, then be warned that a major loss is on the horizon. As I wrote in the beginning, I do not often see The Tower as being so terribly negative because I always look for the positive in even the most negative of situations. Quite frequently, any horrid life event or conditions one must endure as The Tower warns, something good always comes out of it in the end. It may take a while and things may be really, really ugly for some time, but keep in mind that it is always darkest before the dawn.

The Eight of Cups, upright, shows us a lost and broken woman choosing to walk away from the opportunities represented by the neatly stacked wine chalices behind her as well as the full moon which could potentially light the way for her. This card quite literally speaks of the many choices each of us has but are often oblivious to. She could expend the effort to turn around, climb the stairs to opportunities and a better, more positive and fulfilling life. Instead, she is choosing the easier path – the path of least resistance — thus leading to negativity, disappointment and despair. Sometimes opportunity is just behind us and all we need do is choose to turn and look. This card showing up for you today is urging you to open your eyes wide and look all around for untapped opportunities and potential. At times, you may be holding yourself back due to self-limiting beliefs. Shake those off and know that pretty much anything is possible with the right mindset. I often hear from people asking when something good is going to happen in their lives. My answer is always the same: Something good will happen when you make it happen. Be more proactive and take charge of your own life. Make something good happen. Turn around and let the full moon lead you out of the darkness.

Looking at the Six of Swords, upright, we see a figure standing in a boat as they make passage across a vast sea to a seemingly new land. This person’s arms are crossed over their chest as if in triumph that a turbulent situation is being left behind or in resolve that they are headed into a new, much more positive environment once they have crossed the water. To one side of their boat, the seas are roiling and choppy. On the other side, the sea is calm and inviting. The vast difference indicates choice and control that the person has over their own destiny. Through their crossed arms and forward, determined expression, we see a person taking back control of their own life and destiny, no longer at the mercy of others. The six upright swords indicate their will to fight in an effort to maintain that control and to simply create a better overall situation for themselves. These swords offer security and protection against any ill intentions of others and any threats posed to this person. The structures that appear to be built into the rock face in the distance prove that anything is possible with the right mindset.