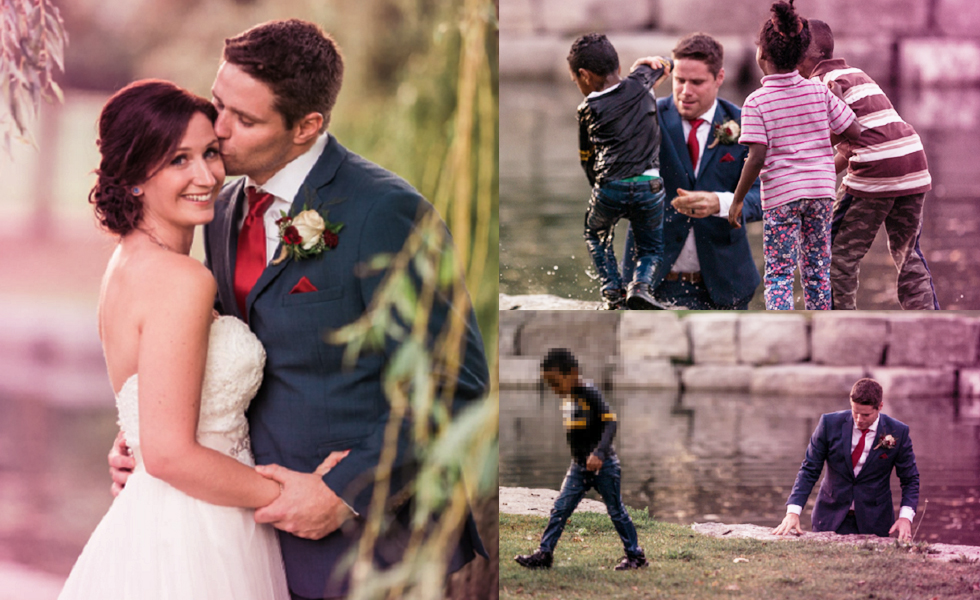 Saving Lives While Tying the Knot

When a newlywed couple poses in front of the camera, the photos normally reflect their devotion towards each other. They find a romantic place, everything is planned beforehand. Most brides and grooms get upset if things don’t go according to plan.

However, on Friday, when Brittany and Clayton Cook tied the knot, something unexpected happened. They were as happy as they could be, setting up for their photo shoot. But just as they were trying to capture the beauty of the biggest day of their lives, Clayton disappeared.

And he had a good reason for it, too. A group of children played along the riverbank when one of them fell into the water. So, quite naturally, our modern superhero jumped off the bridge to save the little boy.
Strangely enough, the scene may as well make it to the couple’s family album. Their photographer took a few last minute shots, and they turned out great. The reasons for Brittany wanting to marry this guy also became obvious. When asked, she said: “That’s Clay to me. It doesn’t even surprise me that that happened. It’s something he would just instinctively do.”

Okay, no surprises there for Brittany, but it was quite a lucky event. Could anyone wish for a more blessed start to their marriage than this? Never mind that the groom didn’t change out of his wet clothes. Both him and his new wife enjoyed the rest of their day as if this was the most natural thing on Earth. Well, maybe they are right. A child survived because of them, and it will be a sweet memory to cherish for years to come.
Let’s wish them happiness, and also consult the cards about the message this act of kindness and bravery sends us.

Five of Cups: The child was on his own, with no hope of survival. And yet, that’s exactly what Clay brought him: hope and survival. Remember, no matter how small our actions seem, to others, it might mean the whole world. Don’t underestimate the power of hope and faith.

Page of Pentacles: Nobody is an island, meaning that we all depend on each other. Whenever you need help, don’t be afraid to ask for it. On the other hand, if you see someone in need, do your best to help them. You never know when the roles will be reversed.

Ace of Wands: Consciousness is shifting now, and people are more aware of what needs to be done. We have every chance of making the world a better place. It’s small steps like these, and “small” acts of kindness that make that shift possible.

Previous ArticleA Big Step for Women in Saudi Arabia – Or not?Next ArticleRepublican Party is Failing, but Trump is Winning