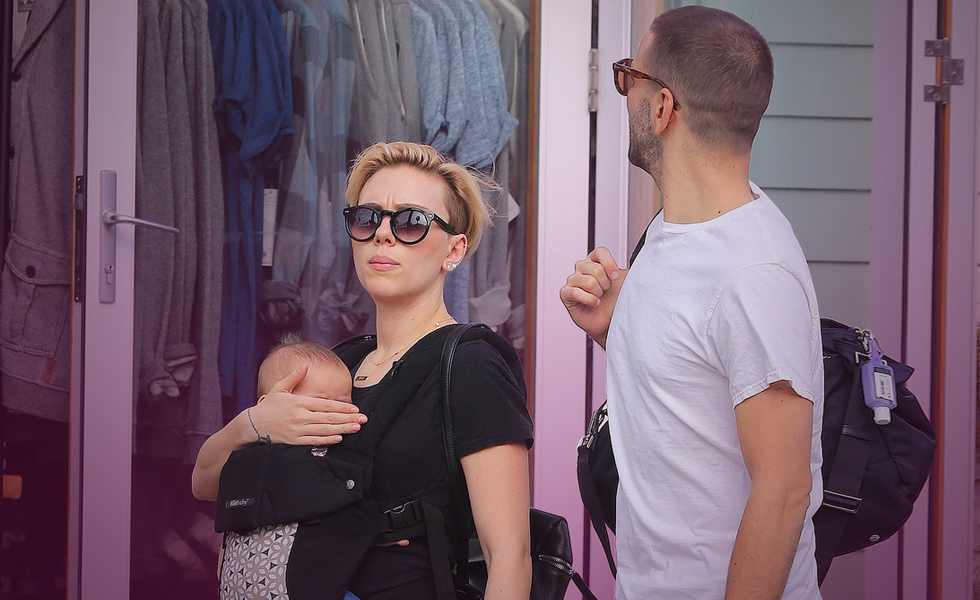 Scarlett Johansson appears to have it all. Domestic bliss and an enviable career. She’s been busy working on three big-budget movies due out within the next few years including comedy ‘Rock That Body’ alongside an all-star cast. More recently Scarlett has enjoyed family time with her two-year-old daughter whilst out and about in New York City together with 31-year-old husband Romain Dauriac. The stars were perfectly matched in his ‘n’ hers black leather jackets. Wedded bliss works for this couple following their nuptials in a private ceremony two years ago at a Montana ranch. Clearly still going strong!

Scarlett is the latest actor to come under fire for so-called ‘white washing’ in her new cyborg movie ‘Ghost in the Shell.’ The controversial film is depicted as ‘distinctly Japanese,’ but the movie’s producer says, ‘Not so!’ He see’s it more as an international story with an entire world approach, hence Scarlett playing the lead part. In a none perfect world of technology, Scarlett is doing well maintaining balance and striving for excellence which she has achieved in abundance. What’s next for Scarlett?

Ghost in the Shell is coming out at the end of March 2017.

So which cards did Scarlett draw today? We have the Magician, the Hierophant and the Two of Wands.

The Magician is the embodiment of conscious decisions being made within her career while being mindful of the end result. Scarlett has successfully mastered the elements within her two worlds with skill and intelligence. She will continue on this path.

The Hierophant shows Scarlett’s continued commitment and devotion to her family. There is a sense of values, tradition, and support that comfort and sustain.

The Two of Wands represents a calm and deliberate pause in Scarlett’s life. She is considering her current projects together with new directions to explore. There is a continued strength and confidence in her expectations of herself and others. Scarlett is wished the best in her current and future projects.

Scarlett Johansson
Previous ArticleWhat has Blake Lively been doing that turned heads?Next ArticleKim Kardashian is terrified after attack – will family support be enough?