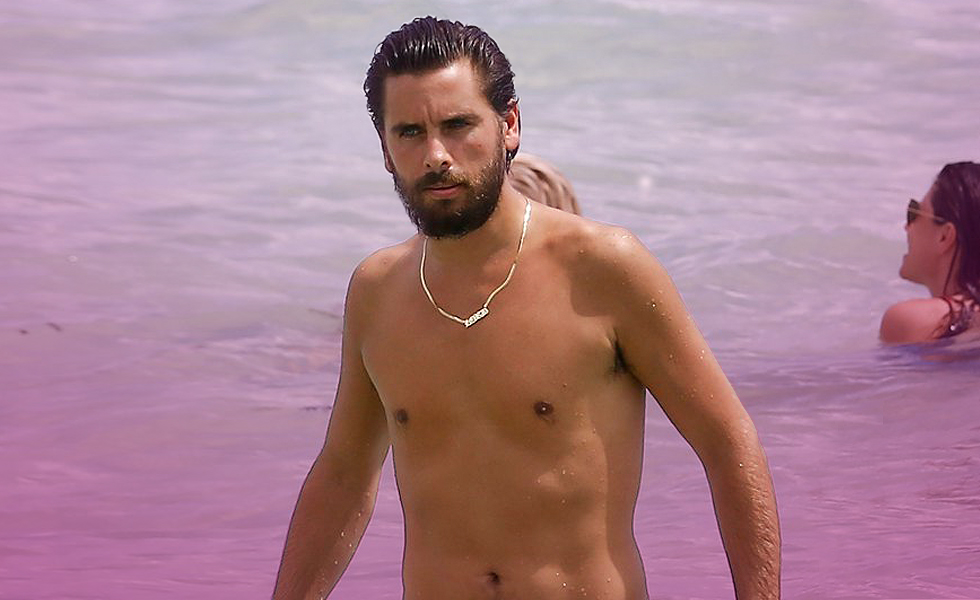 Scott Disick does his James Bond impression. Is Kourtney impressed?

Scott Disick has been spotted holidaying in Miami with his ex Kourtney Kardashian, enjoying beach time with their three children.
Obviously, Kourtney was beach ready and looking fabulous as always as she engaged with her children. She was joined later by sister Khloe but seemed to attract all of the attention in a plunging yellow swimsuit.
Scott inadvertently showed Kourtney his best James Bond impression as he emerged from the sea. He had the facial hair, the moody and brooding look that screamed please take me seriously Kourtney. Maybe he doesn’t have the physique of Daniel Craig but he didn’t look that bad in his tropical prints and necklace, furthermore, he’s cut down on his ‘partying’ and is paying lots of attention to the children.
Clearly, Scott is working hard in an effort to impress the mother of his children Kourtney. But was she impressed?

I’m sure Kourtney was impressed with Scott, but let’s see what the cards say today. We have The King of Swords, The Wheel of Fortune and The Queen of Wands. God loves a trier and Scott is really trying.

The King of Swords is very much Scott’s card. His life seemed to be spend on a mental level rather than an emotional level and this is fine when dealing with an ex, not so fine when there is a need to reconnect emotionally. The absence of emotion here can make him seem a little heartless but there is an honesty within Scott and a need to share his innermost feelings with Kourtney.

The Wheel of Fortune represents fate. In order to avoid being ruled by fate, I feel that Scott should take responsibility for himself as a potential partner and as a father in order that he does not end up at the bottom of the wheel.

The Queen of Wands represents Queen Kourtney, the queen of the castle. Her basic nature is generous and loyal and she commands respect from others, including Scott. She has a passionate nature and this translates as nurturing towards her children. I would say that Kourtney is happy to embrace Scott into her world and she is impressed with his efforts, but he still has a long way to go. Well done to both for working together in the co-parenting department!

Challenging Choices With The Two of Swords Tarot