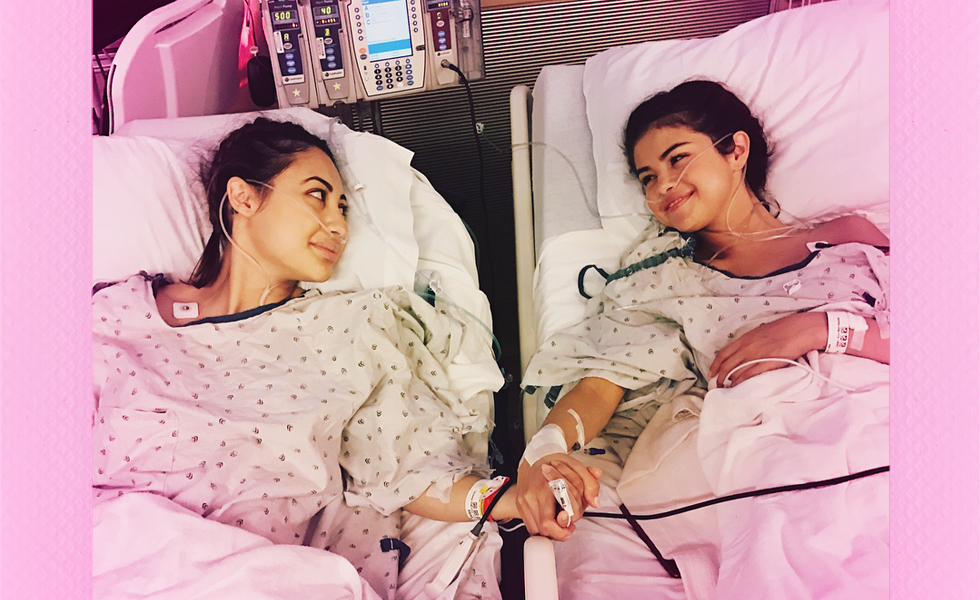 Selena Gomez has never been secretive about her battle with lupus, drugs or heartbreak but she just shared on social media a major secret she didn’t. She had a kidney transplant! And the most awesome part of her secret kidney transplant surgery is that her best friend was the donor! And you think you’re making a huge sacrifice when your best friend asks you to borrow your favorite pair of shoes?! The pop star opened up recently about her ongoing battle with lupus and revealed her surgery on Instagram with a few heart-rending hospital friendship pictures with her best friend and donor Francia Raisa. After releasing new music this summer, Selena Gomez did something nobody expected. She disappeared. Many fans were confused about the “Fetish” singer’s decision to step away without explanation, as she has been open about struggles with her health in the past. Now we understand more about the severity of her situation.

In an emotional Instagram on Thursday, Gomez revealed she received a kidney transplant over the summer from a friend, “The Secret Life of the American Teenager” actress Francia Raisa, due to her ongoing battle with lupus. “I’m very aware some of my fans had noticed I was laying low for part of the summer and questioning why I wasn’t promoting my new music, which I was extremely proud of,” Gomez wrote alongside a series of photos, one of which shows the singer and the actress in hospital beds while another shows Gomez’s scar.

“So, I found out I needed to get a kidney transplant due to my Lupus and was recovering. It was what I needed to do for my overall health. I honestly look forward to sharing with you, soon my journey through these past several months as I have always wanted to do with you. Until then I want to publicly thank my family and incredible team of doctors for everything they have done for me prior to and post-surgery. And finally, there aren’t words to describe how I can possibly thank my beautiful friend Francia Raisa. She gave me the ultimate gift and sacrifice by donating her kidney to me. I am incredibly blessed. I love you so much sis.” Fans have naturally rallied around Gomez, expressing love and support over social media with heartfelt posts and tributes, as well as getting the hashtag #WeAreProudOfYouSelena trending worldwide.

Wow! What can you say after a big reveal like that from one of the most followed pop stars in social media! Kudos to Selena for graciously dealing with her disease like a champ and giving hope and awareness to others who are dealing with it.

Five of Wands:
Internal and external battle and arguments around a life circumstance. I would interpret this card pull that Gomez is pissed she has to deal with this disease in the first place but also she does it with an attitude of “never give up, never surrender”!

Wheel of Fortune:
Going with the flow of life changes and accepting the destiny. I feel this is exactly how Gomez is dealing with her disease and how it affects her life.

The Emperor:
Strong energy with control issues and sometimes the need to be right. Usually, a male energy but I feel this is also Gomez and her kick-ass attitude of refusing to let this disease take her down.