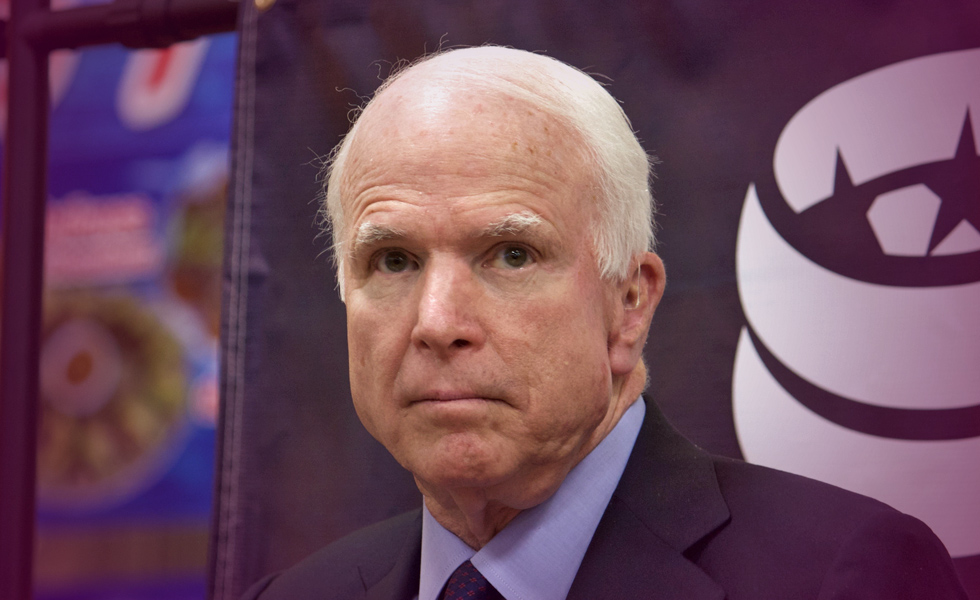 U.S. Senator John McCain released a statement that he has been diagnosed with a cancerous brain tumor and is reviewing treatment options that may include a combination of chemotherapy and radiation. The six-term Republican senator and 2008 presidential nominee, who is 80, has been recovering at home in Arizona since undergoing surgery at the Mayo Clinic in Phoenix to remove a blood clot from above his left eye.

“Subsequent tissue pathology revealed that a primary brain tumor known as a glioblastoma was associated with the blood clot,” his office said. McCain’s doctors said he was recovering from his surgery “amazingly well” and that his underlying health was excellent.

Senate Majority Leader Mitch McConnell, stated he called McCain who is the chairman of the Armed Services Committee, and a prisoner of war during the Vietnam War, a hero and said he looked forward to having him back in Washington. “We all look forward to seeing this American hero again soon,” McConnell said in a statement. McCain received messages of love and support from both sides of the political aisle. Meanwhile, McCain’s office released a statement in wake of the recent revelation. “Senator McCain appreciates the outpouring of support he has received over the last few days. He is in good spirits as he continues to recover at home with his family in Arizona. He is grateful to the doctors and staff at Mayo Clinic for their outstanding care, and is confident that any future treatment will be effective. Further consultations with Senator McCain’s Mayo Clinic care team will indicate when he will return to the United States Senate.” McCain’s daughter Meghan released a statement on social media saying “the news of my father’s illness has affected every one of us in the McCain family.”

It seems as though not all US Senators agree with McCain continuing to hold his senate seat since his diagnosis. A former rival of Senator John McCain has suggested he should step aside following his cancer diagnosis and appeared to hint she should be the one to take his job. McCain has not made any suggestion he will need to step down because of his health, prompting Dr. Kelli Ward, who ran against him in last year’s GOP primary, to give him advise on stepping down. Writing on her website, the Senate candidate who is now running against senator Jeff Flake in the 2018 primary, suggested McCain should be spending more time with his family. “Senator McCain and his family have a lot of hard decisions to make. As a doctor, I’ve counseled people in similar situations and these end-of-life choices are never easy. I usually advise terminal patients to reduce stress, relax, and spend time laughing with loved ones,” she wrote. “The Senate has complicated and difficult problems to deal with and Arizona deserves to be represented by someone who can focus on those challenges.”

Senator John McCain Will, As Always, Put Up The “Good Fight” With This Life-Threatening Diagnosis

McCain has displayed heroic actions in the face of adversity in the past but this one may not be in his favor. This is the most aggressive form of cancer that begins in the brain and treatment for it is extreme. With his age factor and survival statistics, I believe he is facing the outcome of this diagnosis in the strength he has used in every other challenge in his life.

The Empress:
This is a loving and nurturing female generally associated with wife energy. I will say this card is the supportive card of his wife and daughter through this health ordeal of which he relies on very much.

Ten of Wands:
This is a burden card. I believe as the treatment and the end results of the diagnosis, him maintaining a rigorous daily agenda will eventually become impossible for him to hold up.

Eight of Wands: Inverted (Upside Down)
This is fast action of unexpected change. Since pulled inverted, I feel this health issues may go all bad ass on McCain quicly, possibly just when he thinks he is doing well. (Hope I am wrong on that)