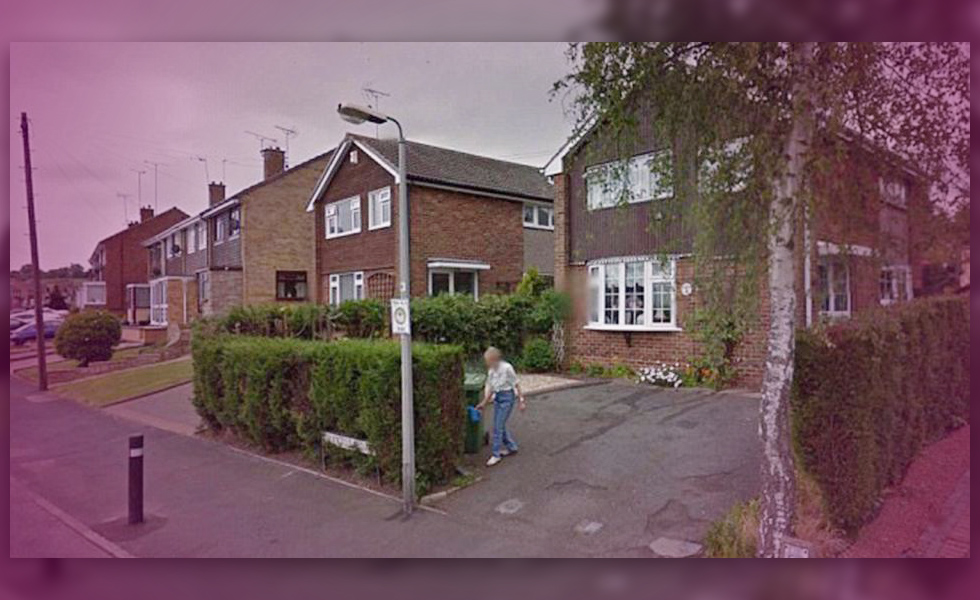 Denise Underhill, originally from Polesworth, near Tamworth, UK and now living in Florida, felt nostalgia for her mother Beryl Turton. Well Denise “got the biggest surprise ever” after she saw her mother pictured on Google Street View, 18 months after she passed away, according to media reports. Google’s Street View, which takes photographs as it maps, captured her mother Beryl with her blue watering can unsuspecting of the passing vehicle or the joy it would bring her daughter years later. Some people believe their dead departed loved ones continue to exist in another dimension and this woman couldn’t believe her eyes when she spotted her dead mother actually standing outside the house where she used to live. Denise told the Tamworth Herald that she had an urge to check up on her old home via the search engine’s satellite imaging to see if the new owners changed it any.

“As I went about my housework, I somehow instantaneously had the impulse to call my mother but realizing that it was completely out of the question, I decided to Google Earth my mother’s home to see how it looked, considering, since she had passed away in 2015 and the property had been sold,” she said. But knowing this would be impossible, she made a decision to take look at her old family home in Tamworth, Staffs, using Google. As Denise searched Chaytor Road on Google Street View, within minutes there was her mother’s house which she recognized by the tall silver birch that stands on the property. Instead, the woman was shocked to see an image of her mother on the technology, watering the front garden of her home. What Underhill described as a fitting image of her mother as it was something she did regularly. She recognized her mother dressed in a white polka dot shirt and blue pants tending to the garden with a blue watering can, in a picture clearly taken many years prior. “I got the BIGGEST surprise EVER! I just couldn’t believe it. At the foot of the driveway was my mother. She was watering the garden, just as she always did,” Underhill said. “I was absolutely astounded – it made my day. You never know what photos are being taken but they really do last a lifetime. I think someone wanted me to see this.”

You do not know when they are being taken, but these pictures are stored on the Internet for lifetime. With the help of hundreds of thousands of pictures being clicked by people, many parts of the world can be seen on Google Earth. There are still many pictures on Google Earth from the year 2008. Google Earth now updates its pictures every year but it may be possible that the location Denis searched for had not been updated or…..maybe Denise just got to experience one of those unexplainable happenings when a loved one wants to make contact?


Definitely Someone On The “Other Side” Wanted Denise To Street Google At That Precise Time!

Regardless of whether Denise saw an apparition or an old Google Street photo. What the unexplainable factor here is her receiving the “message” to look up her mother’s old home at that precise time. I would say this looks like one of those definite taps on the shoulder from the other side.

This is ultimate success out in the world and happy conclusion. I believe this captured paranormal incident brought Denise not only the shock of her life but also great happiness in seeing her mum. Since she could not “talk” to her, I feel her mum found another way to contact her.

Seven of Pentacles:
This is seeing the rewards of your hard work and fruits of your labor. I feel that Denise has been thinking of her mum since her passing and has always wished there was a way to know she was still around her.

The Magician
: Inverted (Upside Down)
This is manifesting a heart’s desire with intention. Since pulled inverted, Denise did get the shock of her life when her thoughts of her mother created then unexpected and unexplained incident for her to see her again.

The Supportive And Positive King of Wands Tarot

The Relationship Challenges Of The Tower Tarot Card