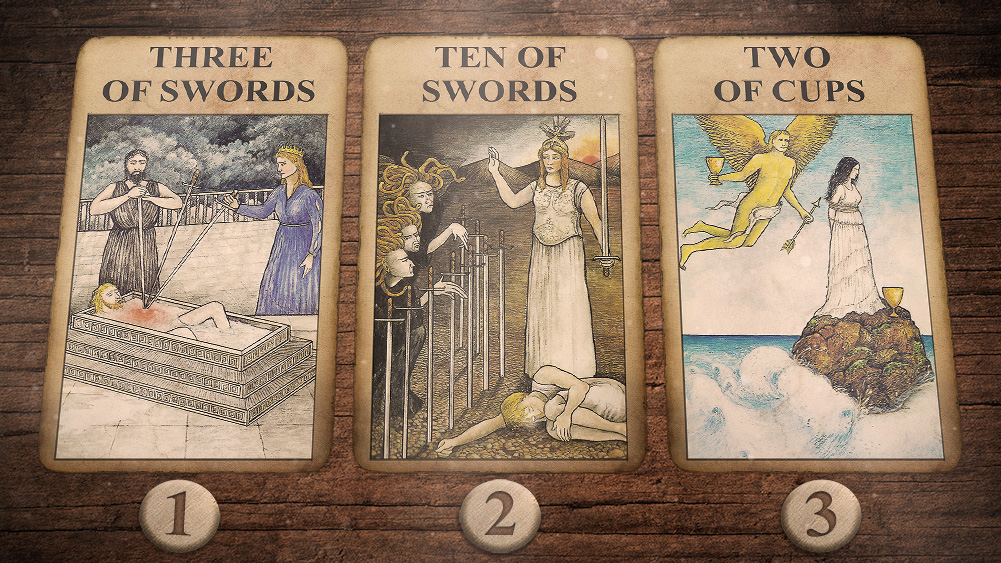 Among the meanings indicated by the Three of Swords is a love triangle. This is quite often the case in a love reading and it may serve as confirmation in a daily draw if you have been suspecting your significant other of being unfaithful. The Three of Swords will also speak on depression, loneliness, heartache, unhappiness, sorrow and an overwhelming sadness in a daily draw. If you have not already found yourself in the midst of any of these situations, then brace yourself because things are about to be quite dark for you emotionally. At the same time, this card can be a “forewarned is forearmed” card and could help you avoid such a negative and oppressive situation. This card also talks of grief, loss and the shedding of many tears as well as any other emotionally distressing time. Whatever situation is being foretold by the Three of Swords, you can expect a time of great upset, upheaval and possibly overwhelming confusion. Other less emotional indicators of the Three of Swords are general hardship, difficult situations that may cause tremendous stress, conflict, major misunderstandings, overwhelming distraction and disillusion. Because many of the situations spoken of by the Three of Swords may affect you on a deep emotional level, this is not the time to simply try to suck it up and soldier on. Rather you need to take some time to process your emotions and allow for significant healing. Alternatively, the Three of Swords could indicate a test of strength and just how much you can take and still hold your up and work to move forward. Do not just wallow in the mess, try to find the lesson so the experience is not wasted. Also, never be too ashamed or too afraid to simply ask for help.

An awesome card to receive in your daily draw or any tarot spread is the upright Two of Cups. The very most basic meaning behind this card is complete harmony in love and quite often foretells of a new and very positive romantic connection around you. While the Two of Cups quite frequently speaks of romantic love, it can also indicate growing respect and admiration as well as you being held in high regard in friendships and partnerships of all kinds. When the Two of Cups appears for you, it usually indicates that life, overall, is going well for you, or at least will be very soon. Any current negative life issues will be smoothed over and rectified in the near future. It does not speak much of cause for celebration, but rather more personal victories that are to be quietly celebrated by yourself and possibly with someone quite significant to you such as a romantic partner or your closest friend. While the Two of Cups heralds wonderful things taking place in your life and well on their way to you, it is also a rather understated card. The Two of Cups speaks of equality and balanced relationships as well as an overall balanced and good life. It can also indicate a sudden increased popularity so enjoy the added attention but do not question it.