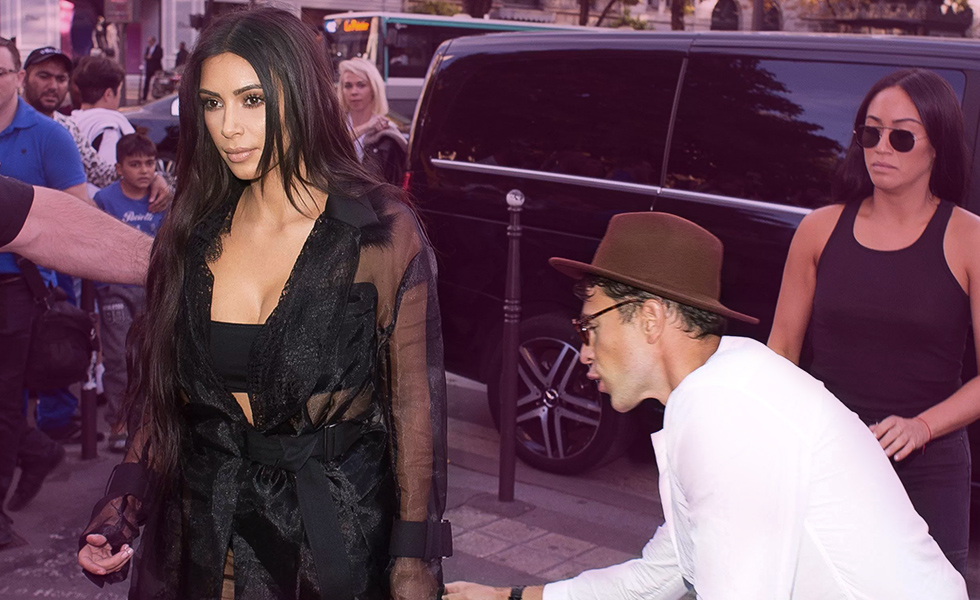 Taking Pranks to a New Level – The Ambush of Kim Kardashian

Most people who keep up with the Kardashians, wish they could have an encounter with Kim Kardashian. But there is one person, who went a bit too far when he rushed up to her on Wednesday, trying to kiss her butt. Fortunately for Kim, she managed to go past the “attacker”, and he was taken down by her bodyguards.

If this was the first time this happened, we could say that probably it was just the desperate act of a huge fan, but unfortunately, Kim doesn`t think so, as Vitalii Sediuk attempted to ambush her back in 2014 as well, that time aiming for her leg. I guess everyone knows the saying: “Fool me once, shame on you, fool me twice…” Well, he didn`t succeed second time around either, and even made Kim so angry that she is going to file a complaint against him with the French Authorities.

Although he claims that he didn`t plan on meeting Kim, it seems to have come quite handy for him that she just “happened” to pass the restaurant where he was enjoying his ice cream. But was he really?

There seems to be a slight contradiction there, if we can judge by his post on Instagram not long after the incident, stating that he was trying to convince the Kardashians to encourage teenage girls to feel beautiful in a natural way, without any implants. This seems like a really nice idea, but could this have been his true intention? And if so, why did he have to approach her in such an intimate way?

Let`s ask the cards and find out what could be behind these close-up attacks.

Knight of Cups: Well, well, what do we have here? Indeed, the Knight of Cups represents someone with dreamy ambitions and fond feelings towards you. Could it be true that there is more to the story than what meets the eye (or butt in this case)?

Nine of Wands: This card indicates that this was clearly the best way Vitalii could use all that creative energy of his, but Kim has powerful supporters, too, showing that it will take a bit more effort if he really wants to get close to her.

Queen of Pentacles: She is a generous queen, whose success is well-deserved. She uses her power wisely, patronizing and supporting those around her. She is very forgiving, but I guess there is only that much a queen can take…

KardashiansKim Kardashian
Previous ArticleTrump`s Past Haunts Him – Will This Effect the Election?Next ArticleHow did Jim Carey strike back at Cathrionas Ex-husband?