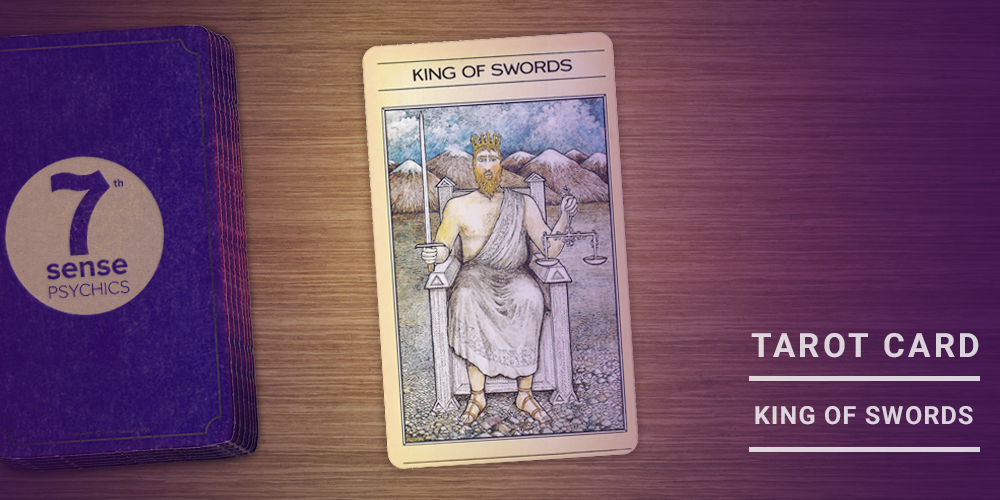 The Authoritative and Intellectual King of Swords

When the King of Swords shows up of someone who is dealing with a personal relationship, business or family, it usually indicates this person (usually representing a male) has contributed truth and courage for them in a helpful way, someone you feel you can lean on and depend on as they have an authoritative energy about them.

The King of Swords always represents someone who uses their intellect to approach life and carries the energy and courage to back it up. If this card is representing your life force, you are at the top of your game at the moment, commanding from a place of power and respect. As a result, others pay attention to what you have to say and are willing to follow your lead.

The King of Swords always use the mental approach to life, has a “thing” about untruthfulness and makes decisions from a place of impartial judgement. This tarot energy sometimes is misjudged as being too direct and all too willing to point out your limiting behaviors that keep you from moving forward. There is usually an air of detachment in their approach to giving advice or helping out in any situation. While you may be a little confused about how they present themselves, not being particularly caring or sympathetic, this approach is usually what is needed at the moment. He is a challenge to get romantically involved with as he seems to never let his guard down and is uses his intellect to participate in the relationship when all you really want is a big hug.

Reversed, the King of Swords can sometimes misuse the power he worked so hard at acquiring. Using their authority to manipulate or persuade others to fulfil their personal needs. Knowing how powerful their energy comes across, withholding love, sex or emotional support to use as a punishment when not given what you want. Sometimes using their accomplishments to make others feel inferior. Bragging, being critical of others and impatient with a demeaning manner. He cares only about his personal interests and will do whatever it takes to get it, including taking advantage of you and anyone else that might move him ahead on the chessboard.

In general, the King of Swords stands for a powerful, opinionated man used to getting his way in most anything. He will have a darker side to him when it comes to getting what he wants and if you happen to be what he has his eye on, he has the ability to make you feel like a Queen to obtain you. He is a very forceful energy and it takes a strong woman to meet his match as a partner. If he is a reversed King of Swords, he may have the tendency to manipulate and bully his partner.

Career: He is a force to be reckoned with. He has a lot of testosterone going for him and moves on his job with a commanding authority, whether he has it or not. Don’t over-sensitive if you find him to be pushy, making you feel invisible or talk to you as though you were a wall. He is a man on a mission, to be at the top of the ladder in his work environment.

Love: Where love is concerned, being involved with the King of Swords can be daunting, to say the least. You have the best chance of making this relationship work if you have a strong character who will not lose your identity in his and using your art of the feminine aspects of your nature. As big as ego as he has, he still is a sucker for an adoring woman.

Money: Where money is concerned, the King of Swords faces reality when finances come into play. He can be a penny pincher when things look a little slim but also generously indulge when he feels he has earned it. Part of his life journey is to learn generosity. He can be a little judgy about people who have hit hard times financially, feeling they brought it on themselves.

Health: When this King comes up in your health area, it is time to get specific. If something has been bothering you, educate yourself on the symptoms and then go see a professional with the information you feel your condition relates to. Educate yourself as much as possible, be an active participant in your medical treatment.

Spirituality: The King of Swords is a paradox of beliefs. In order for him to feel connected to a set of spiritual life changing beliefs, they have to make sense intellectually. You are definitely not attracted to the “woo woo” side of metaphysics and spirituality. Your mind tells you there is something bigger that just this but it has to make sense to you on some level in your mind.

The King of Swords is a powerful partner in life. They can often be workaholics but their sole aim is to make it for himself, his lady and his family. If you are not into big romantic gestures, he will definitely be your king and provide for you very handsomely.